Stigma Mechanic: Receive damage proportional to 10% of the hero's current health at end of any units turn.

Epic Hell Mechanic: With a buffed hero, attack an ally except for the boss with with a single attacking skill 4 times to remove Retaliation Mana.

The team I used for this stage would be Iseria, Tamarinne and Cermia. [Note that Iseria needs to be at least 11 speed above Tammarine.] [My Cermia is on Border Coin but I believe DDJ may be better in terms of damage]

Iseria takes turn 1 to reset Tamarinne's skill, then, uses her first skill to hit an ally 1 time. I gave Iseria Glo-Wings 21 so she will be the first of the 4 single attack skill to remove the Retaliation mana mechanic. Tamarinne will then proceed to transform and push the entire team. Cerma should take the turn now and she should just hit the ally and now it is 2/4 [If you gave her the first skill double attack chance EE, it can be 3/4 here.] The boss and minions should be taking their turns now and depending on who they CR Push back, the turn order might be different than stated here but still focus on removing the Retaliation mana first on this turns, no matter if it is Tamarinne or Iseria, hit the minion first to get rid of it. Next, on Cermia,s turn, the Retaliation mana should be gone and Cermia is now free to just S1 the boss first since the boss would be able to apply decaying curse again on Cermia. On the last turn order, Iseria should defence break the boss, Tamarinne brings Cermia to the boss and on Cermia's turn, S2 and soul burn S3 into the boss, now moving on to the 2nd phase.

Mushroom Mechanic: When it explodes, deals damage proportional to it's current HP as well as poison.

Epic Hell Mechanic: When the boss is attacked 4 times with a single attacking skill while having 3 or more debuff, remove Counterattack Mana.

The team I used for this stage would be Achates, Baal & Sezan and Politis/Summer Iseria. [Note that Politis here is on a DPS Debuff build and Achates is using Magahara Tome to cycle heals faster, Politis is on Tagehel's Ancient Book while SummerIseria is on Star Of The Deep Sea and Baal & Sezan is on Kal'adra]

This phase is fairly straight forward, Baal & Sezan just simply use the best skill he can at his turn base on cooldown. If he lands all 3 debuff, Politis can soul burn S1 twice and Achates can hit the boss on the first turn to instantly make it 3/4 hits to remove Counterattack Mana. If Baal lands only 1 or 2 of the debuff, Politis should just use the 3rd skill. If there is 3 or more debuff on Achate's first turn, she can hit the boss to make it 1/4. Since both Baal and Politis's debuff last 2 turns, On the next Politis turn she can soul burn anyways to make it 3/4. Achates on her 2nd turn should begin heal cycling with S3 > S2 > S3 etc. Just rince and repeat this until the boss move to the next phase. Do note that this team can completely ignore the mushroom mechanic if Baal has enough damage on his S2 to kill them out right. This will also allow him to reset his 3rd Skill to land more debuffs.

If you instead to use Summer Iseria instead of Politis, it will make it so much easier as the boss is not immune to bomb. All Summer Iseria needs to do is continuously hit the boss with S1 and when the boss is about 50% HP [She get a free soul burn too], she can detonate all the bombs to make the boss stay at 40% HP. The next attack from anyone should move it to the next phase.

Anit-Debuff Mechanic: When the boss has a debuff, decrease damage received by 15% and CR push the by 15% per debuff on the boss.

Anti-Counter/Extra Attack Mechanic: When the boss suffers a hit from a counter attack or extra attack, decrease damage received by 60% and counters with his first skill.

Hell+ Mechanic: Takes the first turn and if the boss has 3 or more debuff when attacked, counters with his 3rd skill.

The team I use for this phase consist of Flan, Auxiliary Lots and Commander Lorina. Of all the teams possible this is by far has the hardest gear requirement as to one shot the boss using this team, Commander Lorina has to be on an insanely strong Rage and Penetration Set [The ones you see on Caides 13 One-Shot team involving Laika].  Flan is about 260 Speed with War Horn and  ALots is 250 with Tagehel's Ancient Book. Note that you also need to save about 20 Souls from the previous round to ensure you can soul burn Commander Lorina.

Another team that could work would be Sinful Angelica, Hwayoung and Watcher Schuri. Sinful gives attack buff to both the nukers then the nukers both just nuke down the boss.

This team consist of Auxiliary Lots, Falconer Kluri and Specter Tenebria/Millim. Saves as much souls as possible from the previous rounds. Fluri defense break the boss, ALots push your nuker and with the souls, let your nukers go ham until the boss dies.

Another team I use consist of Diene, Emilia and Hwayoung. This team is pretty straight forward with both the soul weavers keeping Hwayoung alive and Hwayoung just nuking the boss. Not much explanation here needed for turn orders and such.

Happy Clearing! And I hope that the 3-5 Star Light Connection Summons gift ya'll with ML5s! [I got Celeste :( ] 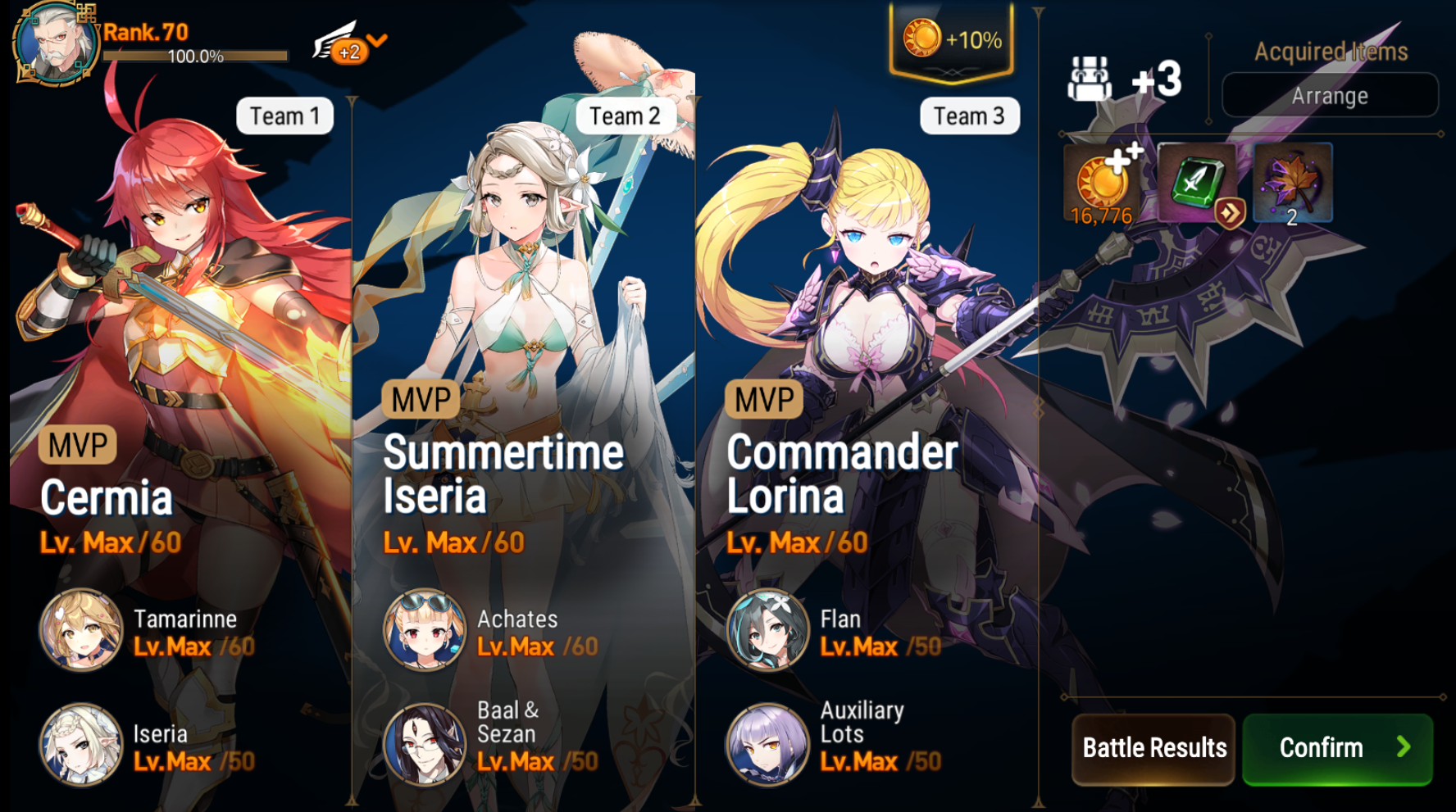