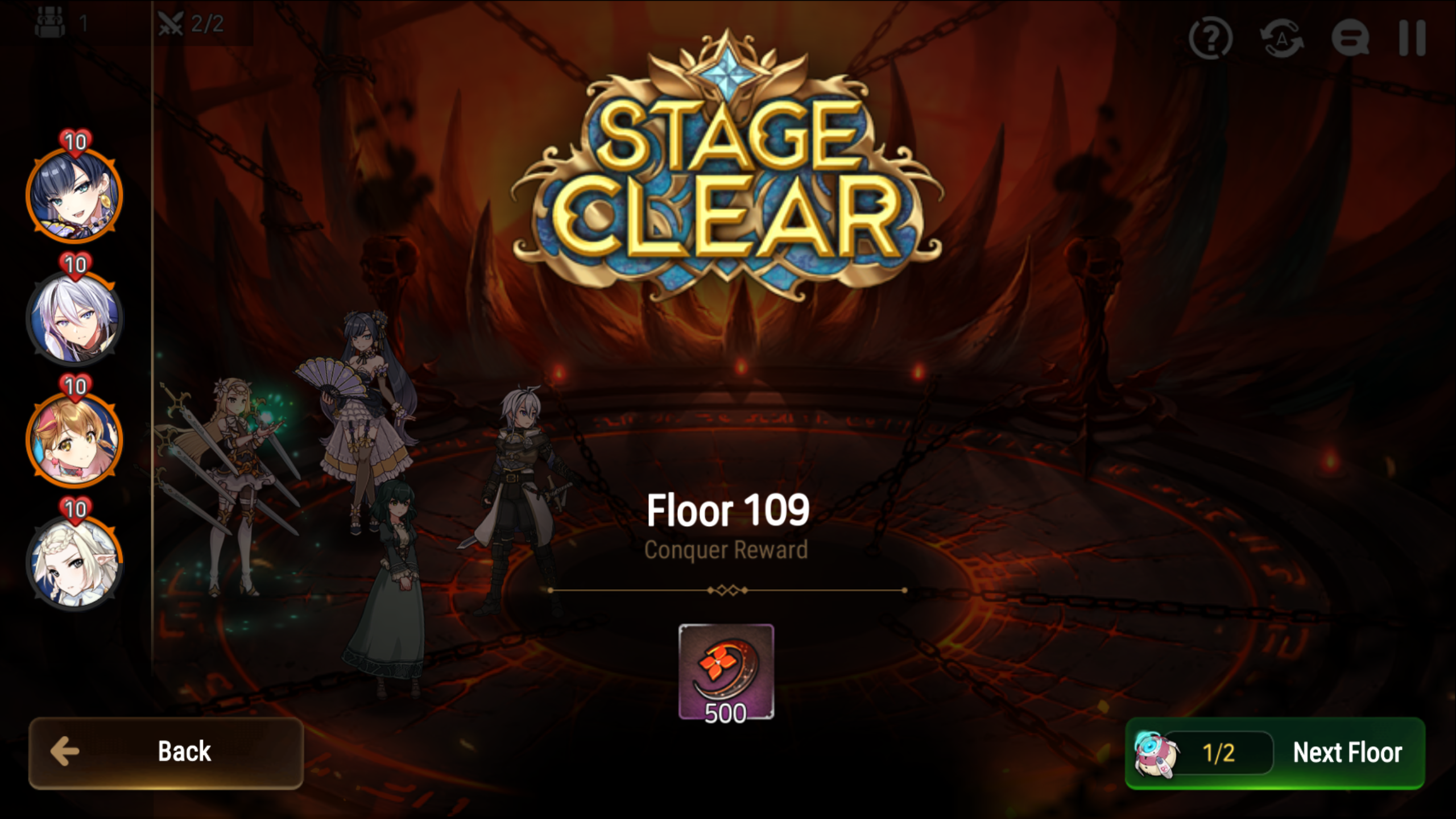 Most of floor 109's clears appear to feature either Taranor Guard or Specter Tenebria as the damage dealer. The need to defeat the opponent quickly also makes Rage set almost mandatory.
This guide aims to suggest an alternative unit that does not need to make use of Rage set: the earth ranger Bellona. This could be desirable to those players who:
1) do not wish to invest time and resources into a niche pve set;
2) are unable to consistently clear the Azimanak hunt;
3) do not own Specter Tenebria;
4) do not wish to promote Taranor Guard to 6 stars.

There are two things that allow Bellona to shine on this floor:
1) her skill 1 damage scales proportional to the target's max health - important to quickly defeat the minion from the first wave's boss;
2) she possesses a focus mechanic that when fully stacked, procs her skill 3 as an extra attack - important to clear Sinful Angelica's 5 skill nullifiers before she takes a turn at the end of the fight.

Recommended stats for Bellona are:
- as close to 100% crit chance as possible;
- close to 300% crit damage and 3000 attack, the higher the better, prioritizing crit damage;
- close to 200 speed;
Mine could reach the above stats with the free attack set plus a crit set speed boot. Some effectiveness will also be beneficial.
She should also be equipped with the Daydream Joker artifact and the Exclusive Equipment which lowers the opponent's Combat Readiness.

The rest of the team will feature Abyss staples in the fire knight Adventurer Ras, earth ranger Iseria and fire soul weaver Tamarinne. Iseria and Tamarinne are irreplaceable, but Adventurer Ras could be replaced by either the dark warrior Kitty Clarissa or the light warrior Camilla due to their similar ability to spam dual attacks, if and only if you are confident you will not need Adventurer Ras to reduce damage by carrying the Aurius artifact.

All three will want at least 60 effectiveness, but for more specific individual stats:
Adventuer Ras:
- close to 20k health;

Now that's out of the way, let's get into the actual mechanics of waves 1 and 2 as well as the general strategy.

On the first wave, Immunity is extremely important on Iseria and Tamarinne to avoid being controlled on the very first turn if you do not outspeed. It is imperative Iseria resets Tamarinne's skill 3 to instantly enter Idol's Form to cleanse, push and buff Bellona.
Restart if your Iseria does not land unbuffable and defense break, and focus down the light minion by soul burning Adventurer Ras skill 2 each turn. Only use Bellona's skill 1, since it must die as quickly as possible or else you will lose.
After defeating the minion, focus on keeping your team healthy as you work on the boss, and absolutely make sure you spend all your souls, since Sinful Angelica will punish you severely for having souls on the second wave.

Sinful Angelica will be accompanied by three mushroom minions and one lich. Always keep an eye on your souls and spend them as soon as you possibly can and never delay doing so. Focus down the lich much like you did with the first wave's minion, and then try to defeat at least two mushrooms before they use their skill 2. Failure to do so will most likely kill your units.

If you manage to defeat the two mushrooms and lich in time, congratulations, things will be easier from here on out. Sinful Angelica will periodically summon a less threatening group of skeletons. Just make sure to cleanse their defense breaks and keep everyone healthy and you can ignore them.

It's important to note a mushroom will instead be summoned if you have souls, and if that happens, you must focus it down. Keep on doing this to ensure you are in a safe spot, and whittle down Sinful Angelica. She has very little health, so as long as you manage your souls and defeat any mushrooms as fast as possible, you should be fine.

Once Sinful Angelica is about to be defeated, make sure your Iseria's skill 2 or your Tamarinne's skill 3 are available. She will grant herself 5 skill nullifiers, and failure to clear them before she takes a turn will instantly kill you, so you will have to push your team and get in as many dual attacks as you possibly can. If you manage to clear all 5 skill nullifiers, Sinful Angelica will die to any damage she receives and you will be able to clear this floor. Good luck!