In this Drop Rate Up event, players will be able to meet the Fire elemental Warrior, Ravi, who has the passive ability which increases her attack both after being attacked and as well as after attacking. Players will also have the chance to receive the Artifact, Durandal, which, if the caster’s Health is at 75% or less after being attacked, will grant the caster increased Combat Readiness!

2) Details: The 5★ Hero, Ravi and the 5★ Artifact, Durandal, will have a higher summon rate!

1) Each summon will cause the summon counter to decrease by 1. (Maximum 120 Summons)
2) If a player does not receive the featured 5★ Hero after 120 summons, then the following summon is 100% guaranteed to summon that hero.
3) If the featured 5★Hero is summoned, then the Summon Counter is reset.

- The Drop Rate Up applies only to this Banner during the event period. Players are able to use both the Guaranteed Drop Rate Up Banner as well as regular covenant summons.
- Moonlight Heroes will not appear during Guaranteed Drop Rate Up banners.
- The featured 5★ Hero will have their probability rate increased to 1% when summoning on this banner and no other 5★ Hero can be summoned.
- Players can summon the 5★ Hero Ravi, and the 5★ Artifact, Durandal from the Covenant Summon once the event period is over. 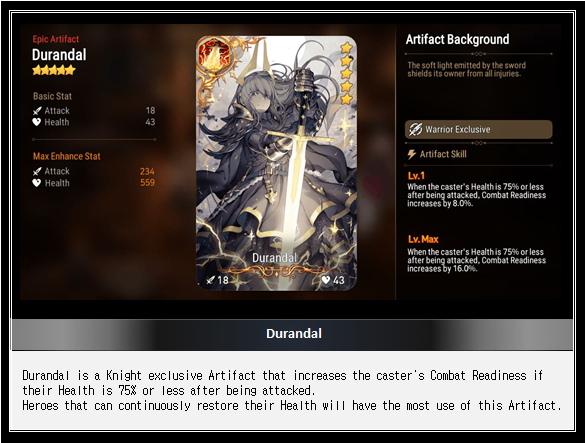