In the noisy halls of Tirel Castle, Iseria is waiting for her Heir.
Do you recognize her with her new look?

Also, join us for our Holiday Side Story, “A small Miracle” as you
enjoy Epic Seven in December!

The Epic Pass has returned with a brand new look to help celebrate the end of year banquet!

Heirs who join Iseria for the end of year Holiday Party will receive Iseria’s new skin,
[Night of White Flowers] as well as a special frame [Holiday Party 2019 Frame]! 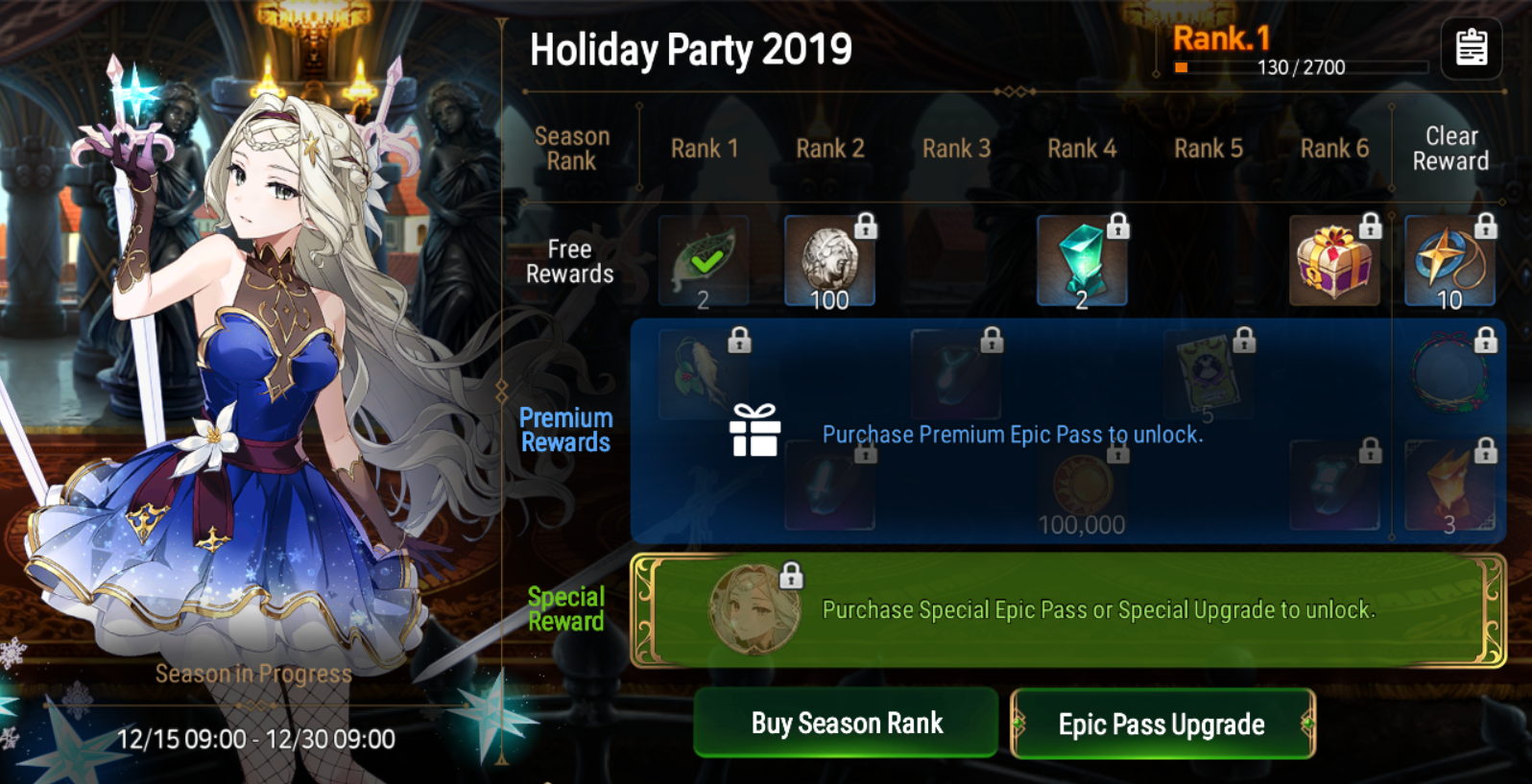 Players can access the Epic Pass by going to the main lobby and tapping the “Epic Pass” icon.

You can Increase your Season Rank by consuming currencies specified

As you increase your Season Rank, you can earn a variety of rewards!

1. Free Reward: Players can receive basic rewards by increasing their Season Rank during the season.

2. Premium Reward: Reward that can be acquired when the Pass is upgraded to Premium Epic Pass.

3. Special Reward: Reward that can be acquired when the Pass is upgraded to Special Epic Pass.

- The Holiday Party 2019 consumable currencies that provide Season EXP are as follows:
(Please note that energy spent for Dispatch Missions will not be counted) 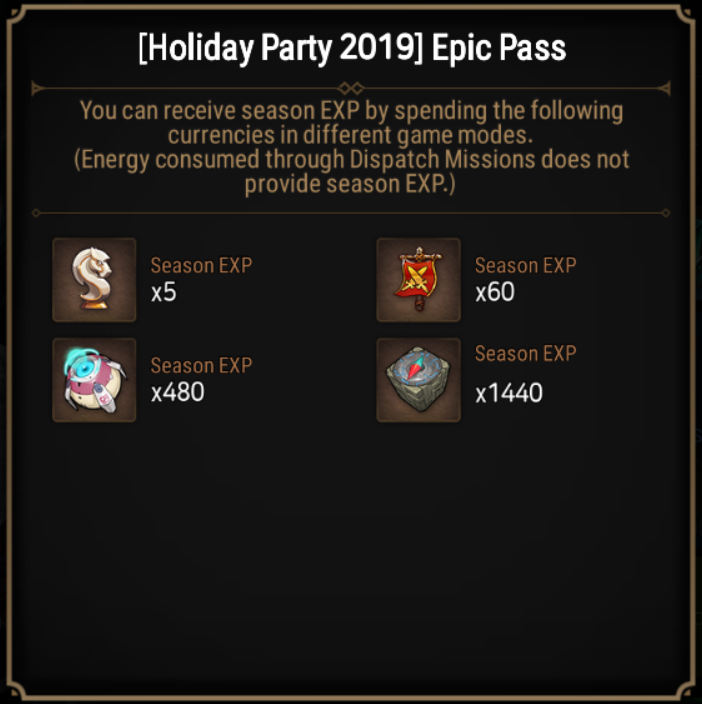 ※ Changes to EXP Received for the Epic Pass

① The following currencies will no longer provide EXP when used.

② The following currencies will provide a different amount of EXP than before when used. Please see the changes below.

③ As it is more difficult to gain EXP, we have reduced the amount of EXP necessary in order to reach each rank.

Players can use 100 Skystones to increase their Season Rank by 1.

Players can upgrade to the Premium Epic Pass or Special Epic Pass by using Skystones. 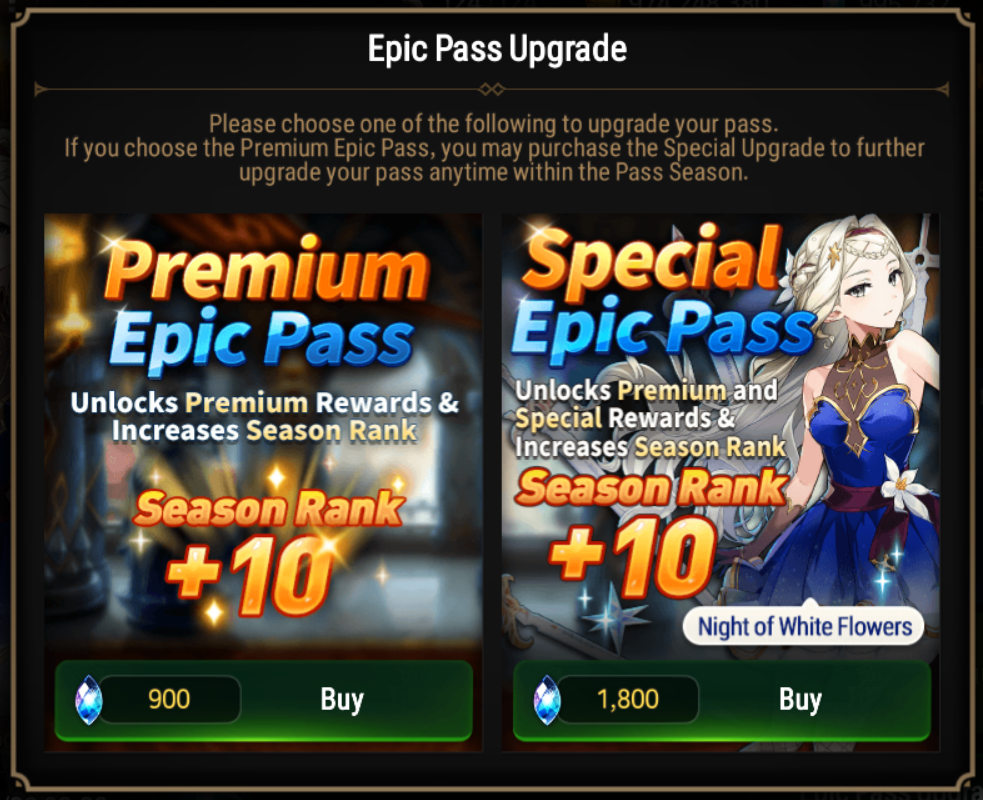 The illustration and cut scenes will change when this skin is equipped on the 5★ Hero, Iseria. 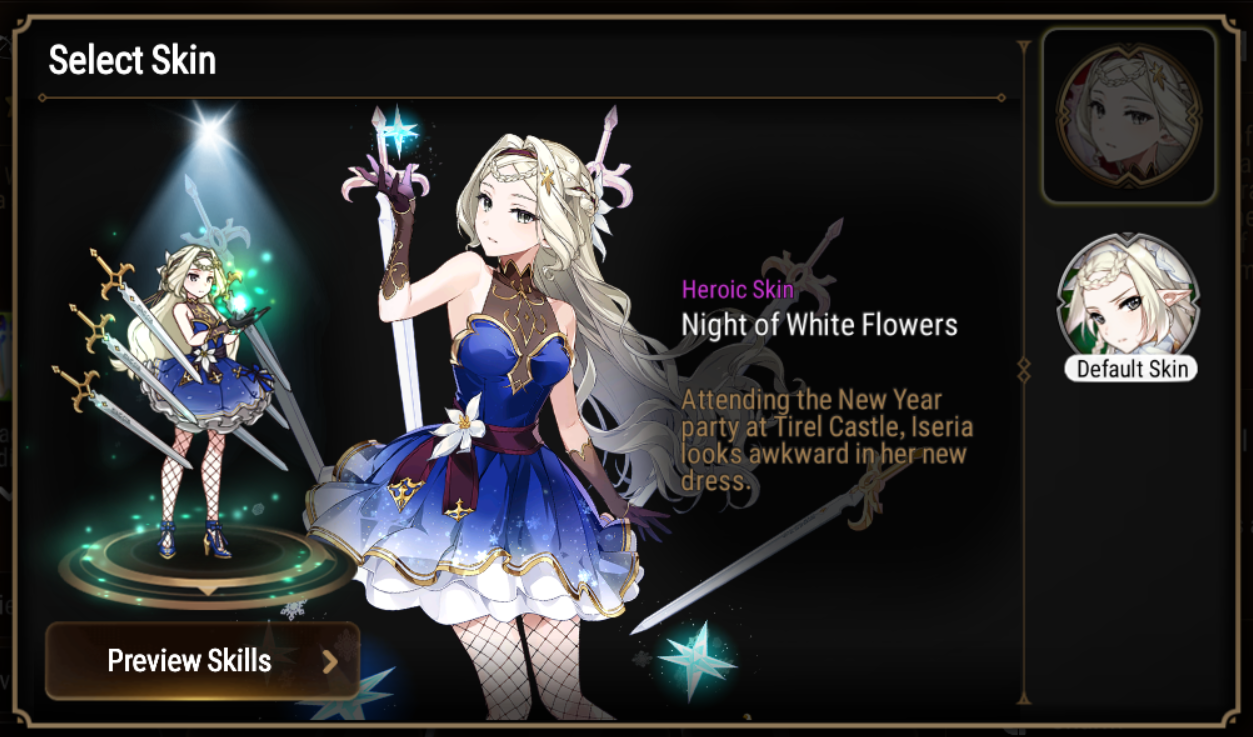 Use the Skin Shop to change the appearance of your Heroes!

In addition to the Skins that were released alongside with our Epic Pass, additional skins will also be available as well as a special Frame!

Use this shop to transform your Hero’s looks! 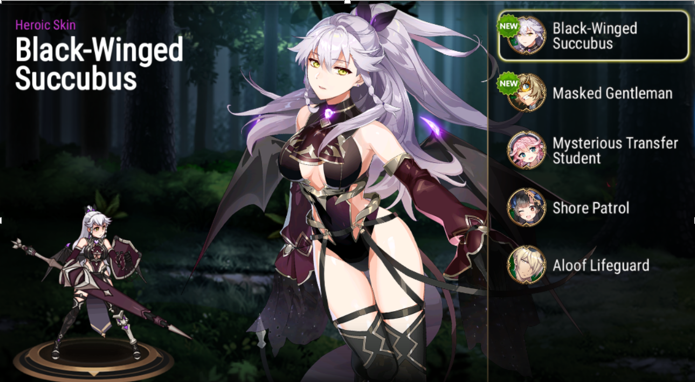 - Players can purchase skins by going to Shop > Skin.

- In order to purchase Skins, players will need to use “Skin Tickets”.

※ Hero Skins that have been previously acquired via an Epic Pass cannot be purchased again.

※ The Iseria Skin, which will be featured in the next Epic Pass, and the Aither Skin, which will be available as a Christmas Side Story reward, will be added to the Skin Shop at a later time.
- To celebrate the grand opening of the Skin Shop, we will be giving our Heirs Skin Ticket x60! This will be delivered to our Heirs via their in-game mailbox.
Scheduled Delivery Time: 12/19 After the Maintenance - 12/25 (Wed) 14:59 UTC

※ Skin Tickets can be acquired by purchasing Skin Packs or the Epic Pass.

An additional Pack has been added. View this pack by going to Shop > Pack. 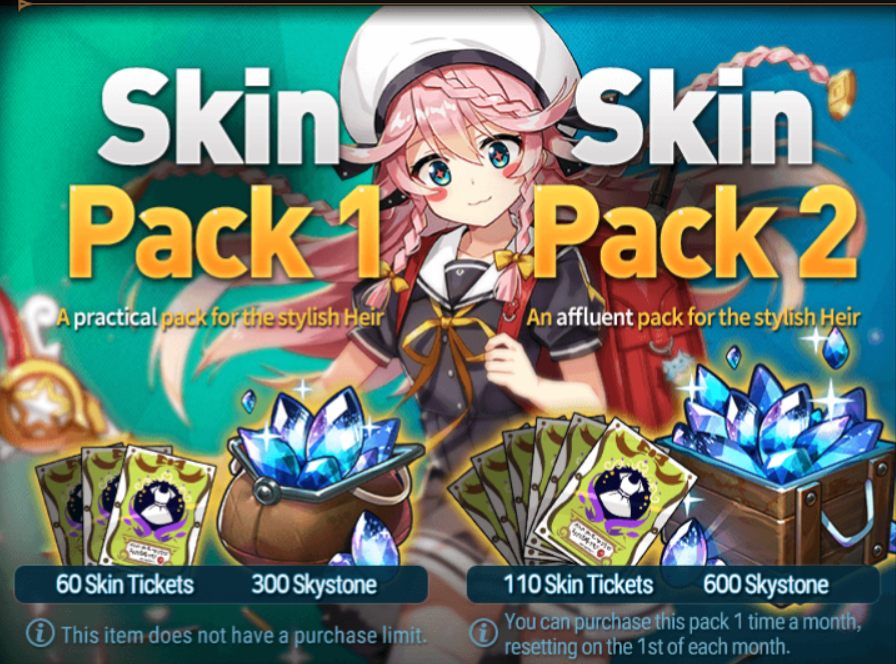 Iseria, the Knight of Flowers and Second-in-Command of the Order of the Sword,

and the Ranger Exclusive Artifact, Song of Stars,

are ready to meet you in this special Drop Rate Up event!

4. Side Story – A small Miracle

As the New Year arrives, it is tradition in Ezera to write a small wish onto a piece of paper and release it into the sky.

To bring happiness to these precious hearts, Ras and Arky get moving...

‘A small Miracle’ is a 2 week Side Story. Players will need to clear certain stages, complete various reputations and quests, and collect special Side Story currency which can be exchanged for other items! 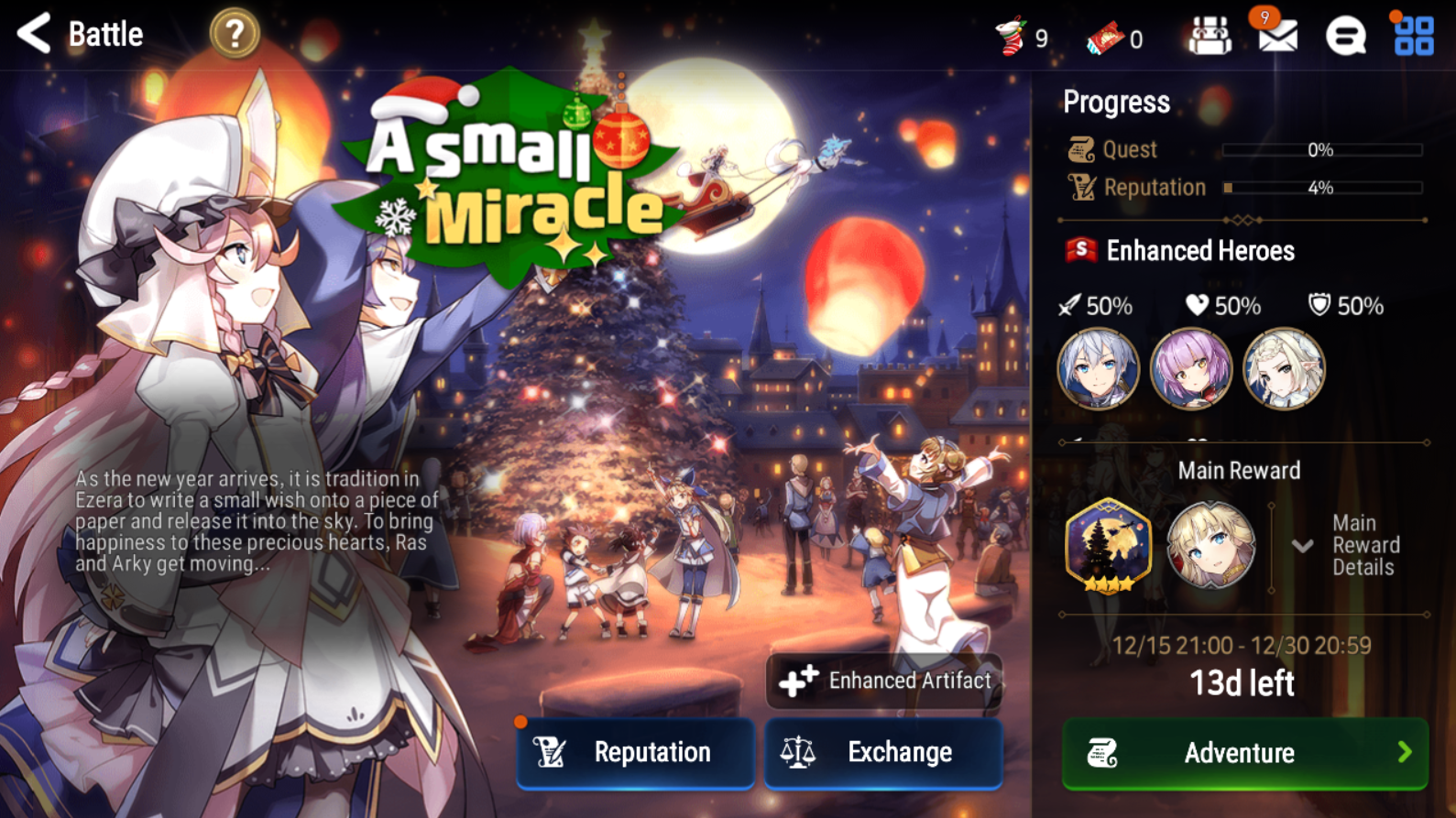 * Players will be able to obtain 2★ monsters and catalysts from regions in the side story. Please check ‘region information. 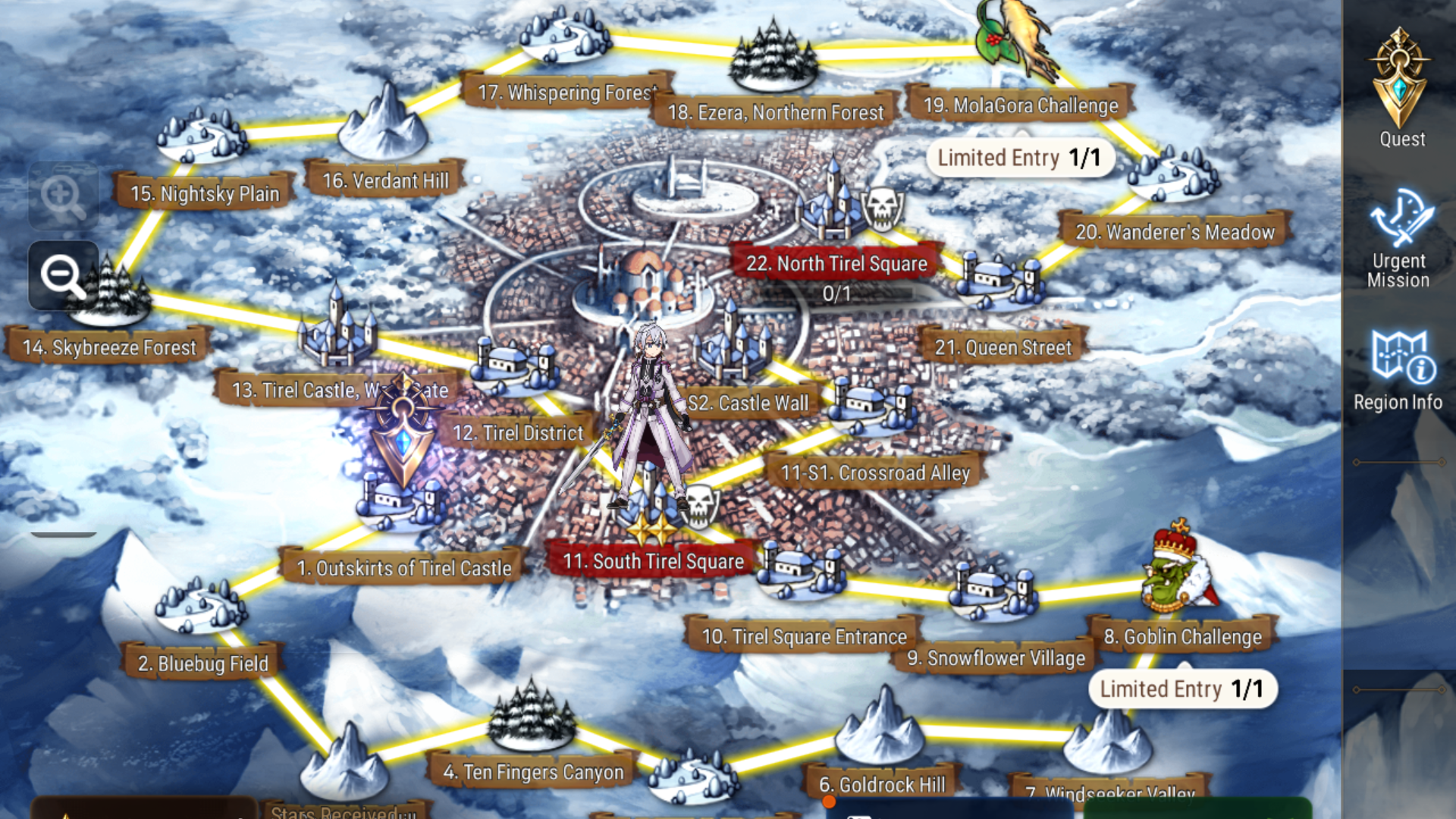 *Players will still be able to access the Week 1 stages during the second week of the event.

* Enhanced Heroes only provide benefits when used in the Side Story, 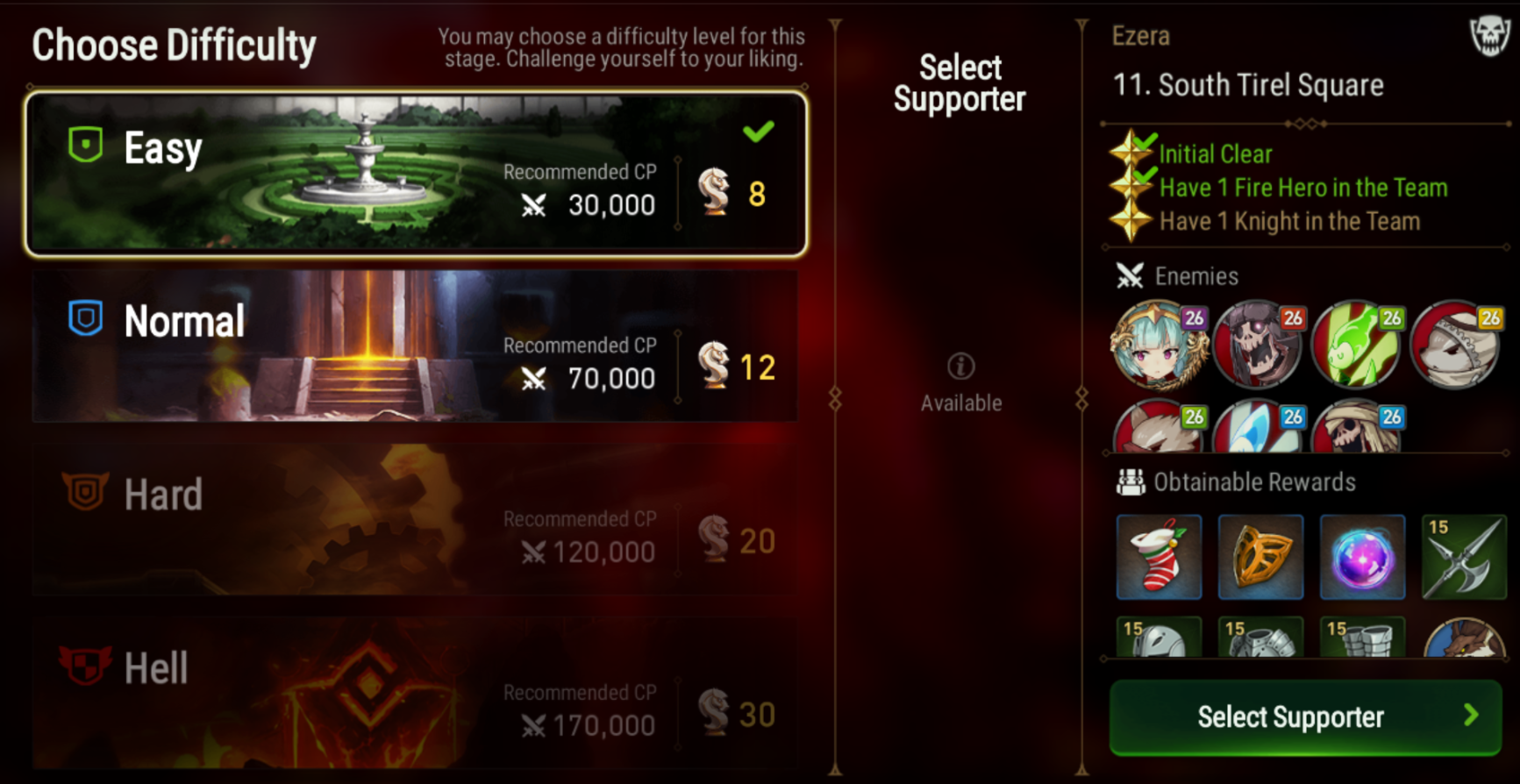 - Missions will be applied to all 20 stages, excluding Challenge stages,

- Each stage will provide 15 Skystones if all the Stage Missions are completed, for a total of 300 Skystones.

- The holiday Side Story, “A Small Miracle” takes place in 1 area.

※ Hidden Achievements will be unlocked until certain requirements have been met.

- Players will be able to exchange the event currency, “Red Socks” and “Bakery Coupon” for items in the Exchange. Players can obtain this currency by clearing battles in the Side Story.

The results of the ‘Which Hero Would You like to Meet Again Before the End of 2019’ are in!
In first place is Diene, who will have her limited summon event next week! 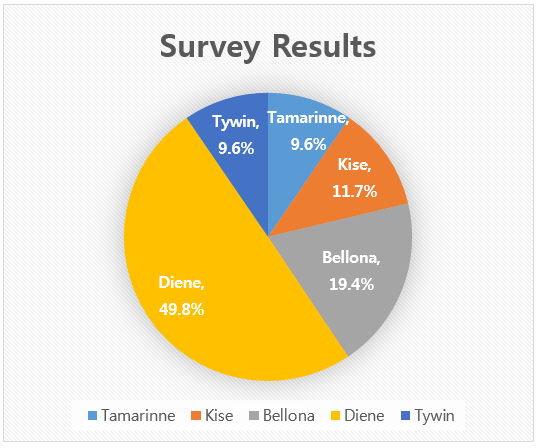 Saint of Ezera, Diene received the Goddess's divine revelation and fearlessly led the world to victory against the Archdemon, later becoming queen of Ezera.
Meet her and the Artifact, Unfading Memories in this special Summon Rate Up event!

- The Drop Rate Up applies only to Diene’s Banner during the event period. Players are able to use both the Guaranteed Drop Rate Up Banner as well as regular covenant summons.

- The 5★ Hero, Diene will have her probability rate increased to 1% when summoning on her banner and no other 5★ Hero can be summoned.
The 5★ Hero, Diene and the 5★ Artifact Unfading Memories, are both limited summons and will not be added into the Covenant Summon after the event has ended.
- This Hero and Artifact may be sold in the same or similar form in the future.

We would like to thank our Heirs for participating in the survey and giving us a lot of feedback.

We will continue listening to our Heirs on all communities, and try to listen to our Heir’s voices through as many channels as possible, such as the survey we just conducted.

6. Side Story 'Eulogy for a Saint' Preview

Next week, Diene’s Side Story, Eulogy for a Saint will be returning.

See Diene in the midst of the Archdemon War 20 years ago. 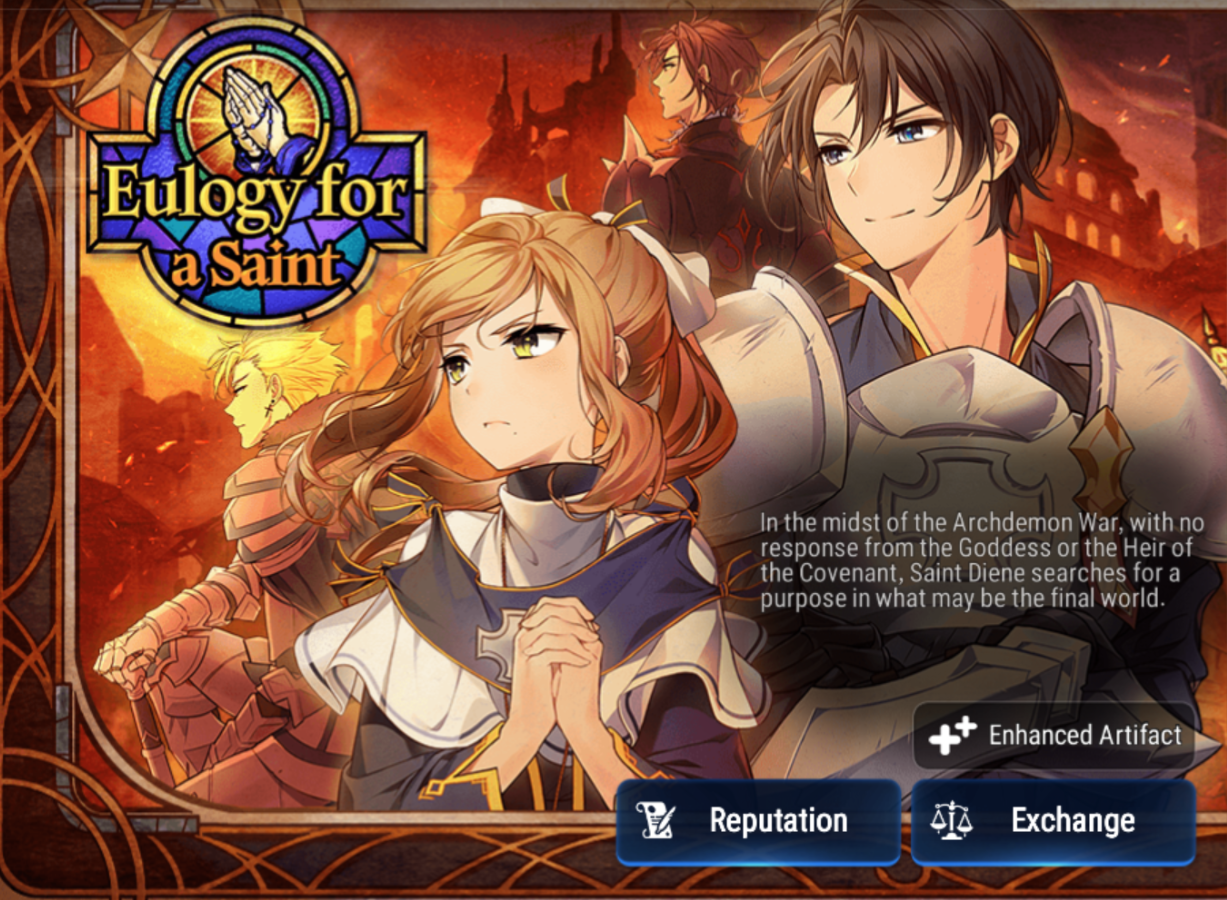 he Nickname Change Ticket, which was announced on November 21st, will be delivered to our Heirs as follows:

- How to Use: Players can change their Nickname immediately upon receiving the Name Change Ticket in their in-game mailbox.

- Name changes made using Name Change Ticket will not immediately be reflected in Guild War. Such changes will be reflected when the reassignments are done for Guild War battles.

- Name changes made using the Name Change Ticket will not be reflected in the Arena Hall of Fame.