This guide is specifically a guide to help you COMPLETE Banshee Hunt Stage 11 for the first time. It is not a guide that focuses on teams that can auto or even OTK Banshee 11 as it is a whole other guide in itself.

The guide will be split into a few parts:

1. Heroes Viable (According to their roles : Healers, DPS, Support, Tank)

2. Artifacts Viable (According to hero’s role)

3. Stats, gears and skill-up requirements (According to roles)

Know Our Enemies
To defeat this stage, let us first know who are we dealing with.

Banshee Hunt Stage 11 consists of 2 waves, first wave being a stage with mobs, second wave being the stage with a standalone Banshee Lord Starlight.

What they do are similar to what the mobs do in Banshee Hunt Stage 10.

The difference is their level, health and damage output has been increased by a decent amount. 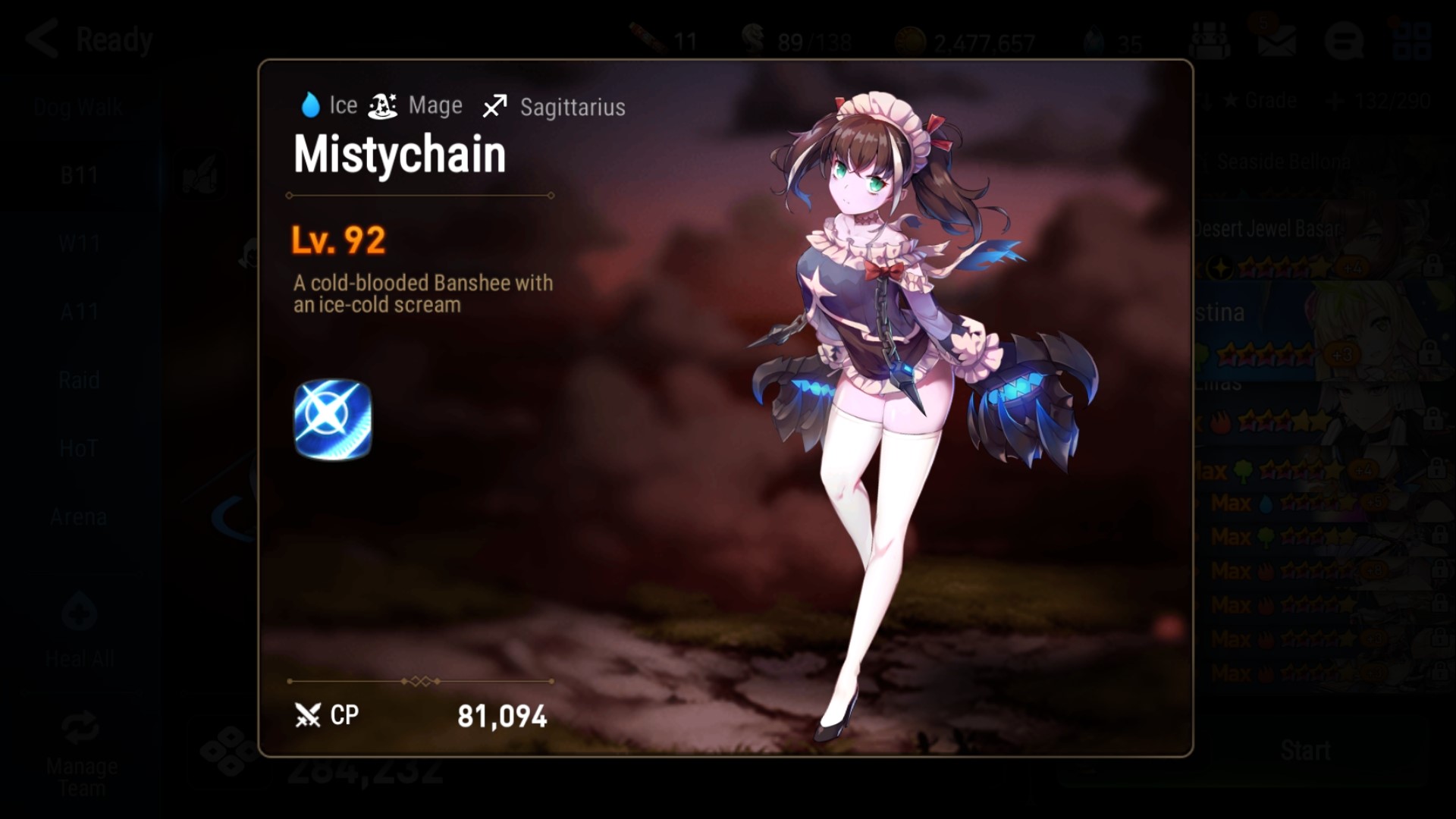 S2: AOE attack, decreases CR of its target by 50% (starts with 5 turn cooldown)

These skills might not be correct, though I picked it straight out of the monster journal and/or the in-game boss guide. Then again, I did correct the ones I spotted to be incorrect. Banshee Lord Starlight works completely the same as Banshee Queen Amethyst which is the boss for Banshee Hunt Stage 10.

The only difference is her passive now grants more effect. There is also an extra special passive added to her where it is not present in B10.

Let’s go through the mechanics from the start.

This boss has unique mechanics, much like the boss of the previous stage.

We will first see what are the boss’s active skills followed by her updated passive.

Attacks 2 enemies and inflict them with poison for 3 turns. When attacking an already poisoned enemy, immediately attack all enemies with a normal AOE attack. This AOE attack does not inflict poison, however, it inflicts a special debuff on one random enemy. This debuff inflicts damage to all enemies if not cleansed before the next turn.

This skill is activated immediately (Boosting her CR to 100% right away) when the boss’s HP reaches around 66% or 33%, otherwise, she will only use her S1. This skill is an AoE attack that dispels all its targets’ buffs. Then, dispels all debuffs inflicted on the caster before recovering a little bit if health. (This is different from B10) Immediately after using this skill, she will use Spirit Shield.

Summons 4 Banshees before disappearing. If all banshees are not defeated in 3 turns, she reappears and inflicts devastating damage to all enemies. After using this skill, the caster is granted stackable increase in attack and defence. (This was not present in the previous stage)

Mistychain’s skills are the same as in the first wave, poison on S1, AOE CR decrease on S2.

These Mistychains all have around 150 speed and 8405 health.

The boss’s passive allows all existing mistychains to be granted stackable attack and defence increase upon the defeat of any of the Banshees. We will get to the passive later.

This phase, similar to the previous stage, needs to be taken care of in 3 turns. Or else, the boss comes back and nukes everyone, probably jeopardizing your run.

When a Mistychain is defeated, grant stackable increase in attack and defence to any other Mistychains.

Increase damage received by all allies (including herself) from Earth elemental units by 30% while increasing damage dealt to non-earth elemental unit by 30%. When using Queen’s Scream, decreases any fire elemental unit’s CR by 100%, inflicting slow debuff for 2 turns.

You need a full team of Earth elemental units to utilize her passive in your favour.

You need a healer that can cleanse constantly to prevent the boss from dealing more damage using her poison-reliant S1.

You need either AOE DPS or a VERY fast single target DPS. This is to kill the 4 Banshees within 3 turns.

Your whole team needs to be balanced, the boss deals constant and random AOE attacks, the 4 banshees attack randomly as well. (Unless of course, you’re running a fire unit, which is a bad idea)

A good healer that cleanses is mandatory to deal with any debuffs and boost sustainability.

A good healer that cleanses is mandatory to deal with any debuffs and boost sustainability.

Although Earth elemental is mandatory for easier runs, any element that is not fire and can cleanse will be strong enough. However, the lack of elemental advantage needs to be compensated with better gears.

The best artifact for this stage is any that can cleanse debuffs. Most healer artifacts boosts healing which can also be good.

Wondrous Potion Vial cleanses constantly, good to counter the poison debuffs. Although other healing boosting artifacts as stated above is not as good, but they are not obsolete, more healing means higher sustainability, cleansing can be achieved through skills.

12K HP with at least above 160 speed will prevent you from being lapped and to keep you alive from most of the boss’s S1 into AOE attack if there is any poison you failed to cleanse.

DPS is needed to, of course, deal damage. AOE is ideal but single target attacks can suffice with good speed.

The best artifact for DPS in general is any that boosts damage output, this stage is no different.

Tonfas and daydream joker are common, they allow higher damage for you to take care of the Banshees and the boss herself. Any other exclusive artifacts that boosts damage output, increase turn count or grants buff like Otherworldly Machinery, Violet Talisman, Moonlight Dreamblade, Rhianna and Luciella are all viable depending on your team comp and heroes available.

There are 2 ways to build your DPS according to your approach in building your team.

1st way, high attack, crit chance and crit damage. With this build, you sacrifice speed for damage and you’re looking to kill the split banshees with only one or 2 hits. This is the better build if you’re using dps with AOE attacks.

Let’s see how much exactly is the stats needed.

There are 2 ways to build your DPS according to your approach in building your team.

1st way, high attack, crit chance and crit damage. With this build, you sacrifice speed for damage and you’re looking to kill the split banshees with only one or 2 hits. This is the better build if you’re using dps with AOE attacks.

Let’s see how much exactly is the stats needed.

Skillup-wise, any that boost damage or decreases cooldown are welcomed, the more you skill up the better your run will go.

A support is not mandatory but definitely makes your run safer with buffs or debuffs.

Charles and Vivian are recommended for their buffs and their AOE attacks, very versatile on support and on damage output. Leo and Bellona are recommended for their AOE attacks that inflicts defence break as well, increasing overall damage output. All other viable supports all have buffs, defence break and other debuffs like provoke that will definitely help your hero sustain and output damage.

Any artifacts that boosts turn count or decreases skill cooldown will suffice. You may run damage boosting artifacts as well if you’re using your support as a sub-dps which is the optimal choice to clear B11 smoothly.

Artifacts Viable: Pretty much all artifacts. (Any artifacts boosts stats and small gimmick that strengthens your units, yes, even Butterfly Mandolin)

The recommended artifacts either boosts speed or decrease cooldown, both helps your support unit to use their skills that grant buffs or debuffs constantly. Other exclusive artifacts such as Dignus Orb, Necro and Undine, Aurius, Adamant Shield etc all are viable choices that boosts sustainability, damage output or turn count. You can use exclusive artifacts if you feel that they puts more on the table than the recommended ones here, they are only recommended because they are quite common and does the job decently.

For a supporting hero, you want him or her to be speedy and have decent health. This is so that he or she can use their skills more often and sustain well at the same time.

Stats requirements: 12k health to be safe, the more the speed the better but it must not be less than 160, you will be lapped by the boss and the banshees that way, unless your other stats can compensate for the slow speed to take down the banshees quick. Good damaging stats are not mandatory but will always help smoothen your run.

Gear-wise, speed set with any other set will suffice since speed is the main focus to get more turns to more buffs or debuffs going.

Skillups that decreases cooldown is ideally needed, it can be compensated with higher speed though.

For this stage, you do not need a tank that specializes in soaking damage, the boss and the banshees attacks randomly.

You need a tank that buffs your team or debuffs your team, which makes their role as a tank obsolete. I’ve already include some knights or conventionally-known-to-be-tanky units in the support category. I mean well, a tank that is only there to buff or debuff means that it works as a support and nothing else isn’t it.

Team comps you can run:

The arrangement of recommendations above are arranged in an ascending likeliness of failure and descending speed of completion, meaning the lower you read the less likely that comp will work but your clear time gets shorter.

Healer/Cleansers are MANDATORY to deal with poison and sustain your whole team. DPS are mandatory because you cant kill without damage can you. Support are not mandatory but as showed above, you will find more success with supports but your clear time will be longer.