Banshee 10 consists of 2 waves, first wave with 3 mobs that poses less of a threat, second wave with a boss, that may proof to be challenging to beat. All enemies are around 160 speed. 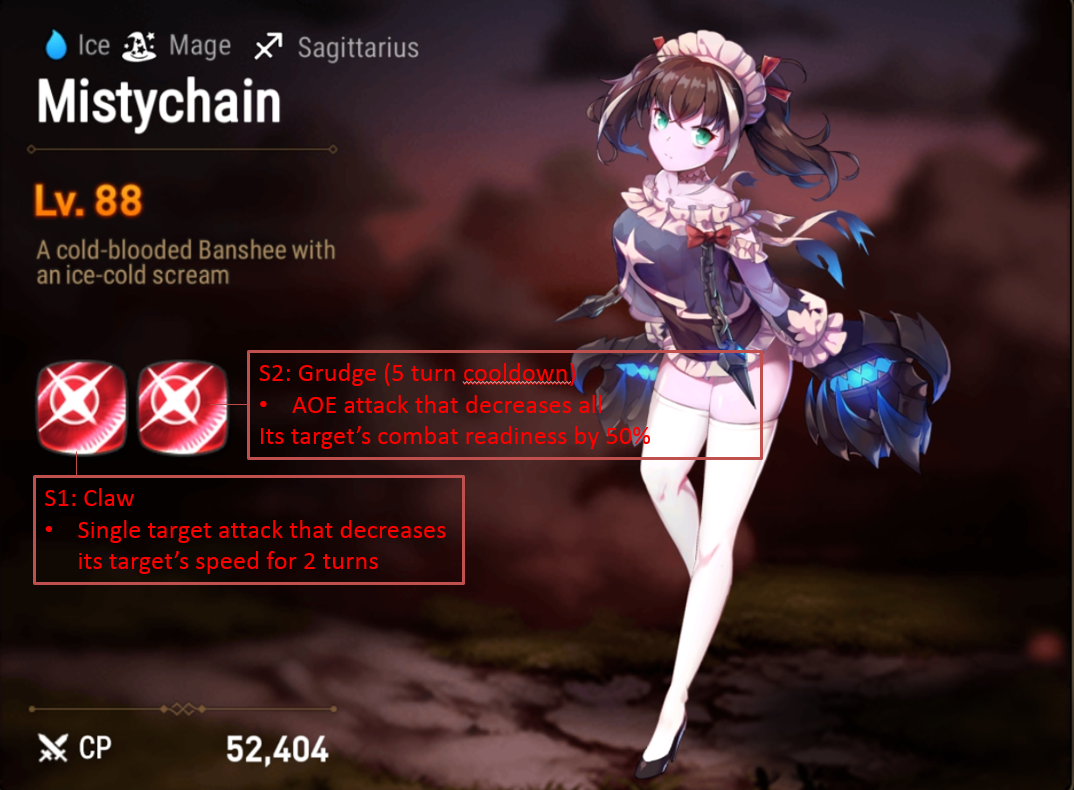 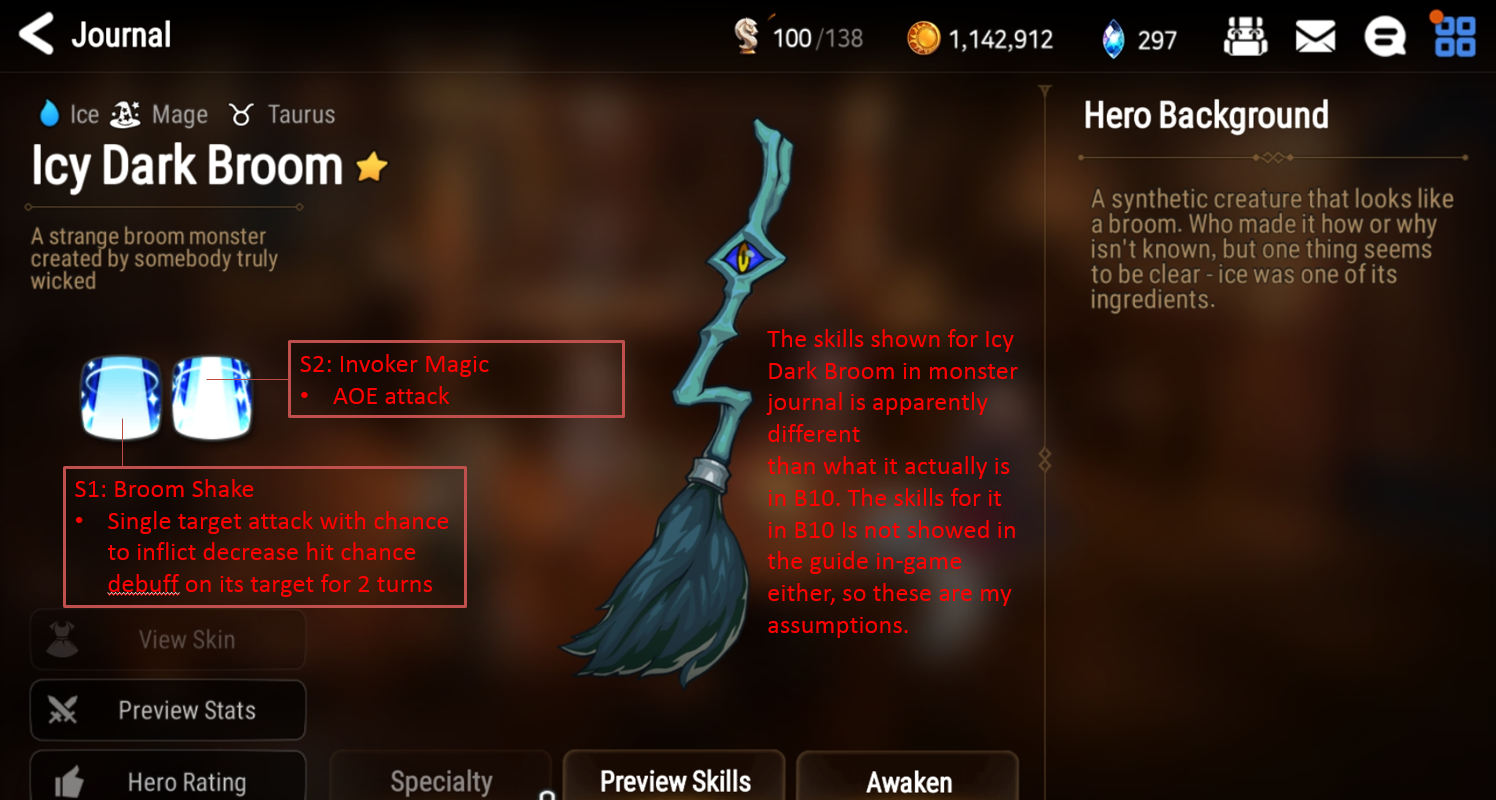 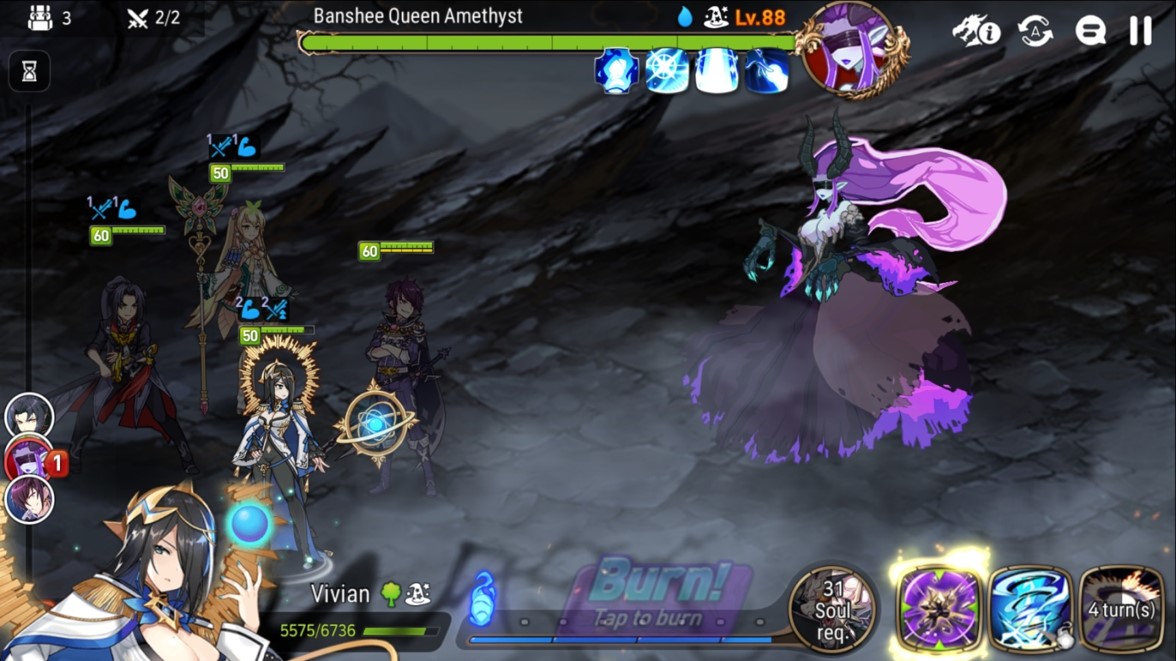 This boss is quite unique, she has some interesting mechanics, let’s go through the basic skills first.

Single target attack with 100% chance to inflict poison debuff on its target. If attacking a target that has poison debuff, attacks right away with an AOE attack, then, inflicts another debuff on one of the enemy. This debuff deals aoe damage to all enemies one turn after it is inflicted.

She only attacks with S1 and nothing else except when her health drops to a certain amount, we’ll get to that next.

She uses 2 special skill, Queen’s Scream and immediately after that, Spirit Shield when her health drops to 2 certain points (66% and 33% HP), otherwise, she uses S1 only.

AOE attack that dispells all buffs and inflicts silence debuff for one turn. Immediately after using this skill, uses Spirit Shield which we’ll talk about next.

Summons 4 random banshees before vanishing when HP drops to around 66% and 33%. If the banshees are not defeated in 3 turns, Banshee Queen Amethyst returns and does devastating damage to all enemies, pretty much will fail your run if it happens.

The 4 banshees summoned are random.

The boss has a passive skill, Twillight’s Attendant.

This skill allows Dark/Light banshees that are summoned after Spirit Shield to be stronger and gain special effects. Dark Banshee will deal AOE attack that inflicts silence or decreased attack debuff . Light Banshee grants all other banshees 100% combat readiness upon its defeat.

It sounds complicated, so first, let it sink in.

If they are defeated in 3 turns, it comes back, and things repeat from 1. to 5. until she’s defeated.

I will split the guide into 4 parts:

A tank is needed to soak up damage, B10 has multiple enemies that does high damage and a lot of AOE attacks.

Viable Tanks: All Knights or Healers that is not fire elemental.

B10 does constant aoe damage, ideally you would need a tank that soaks up damage and buffs your allies to increase survivability. Thus, a fast and tanky hero should play this role. Heroes recommended all have buffs to allies and can have high HP.

Artifact that mitigates damage will work to help you survive.

To effectively soak up damage, a tank should have high health and defence.

With the help of healer, you should be able to soak up any burst damage without being defeated to allow more times for buffing allies.

Molagora: This can be compensated with good gear, any molagora investment to decrease cooldown and increase effectiveness helps to smooth your run.

DPS is your main source of damage, because of the boss’s Spirit Shield, which summons 4 mobs that you need to defeat in 3 turns, a DPS that does AOE damage is ideal.

Viable DPS: All heroes that is not fire elemental and high base attack.

DPS needs to deal high damage, either enough to defeat B10 mobs in one hit one by one or is AOE, otherwise, it might not be easy to defeat all 4 mobs that you have to defeat in 3 turns. High speed helps with defeating the mobs quickly.

These 2 are quite common and boosts damage dealt. Any other artifact that boost damage is viable but the suggested ones are the best. Of course, other niche artifacts that helps with cooldown, debuffs or buffs helps if you don’t have the suggested 2.

These stats would guarantee success, then again, lower stats might succeed, just not as consistent.

Molagora: Any that boosts damage dealt or effectiveness will help smooth your run.

Healer with CLEANSE OR IMMUNITY is MANDATORY for safe runs. Cleanse and Immunity deals with the various debuffs in this stage and helps your allies survive the constant aoe damage.

Healers Viable: All soulweavers that is not fire elemental with cleanse or immunity.

All these artifacts has cleansing ability or helps with granting your healer more turns for more healing and cleansing. Niche artifacts are viable, just not as effective.

With defensive buffs and debuffs, these stats will guarantee success. Lower stats lowers the consistancy.

Molagora: Any skillups that decreases cooldown for more healing and cleanse will be ideal.

A support is not mandatory, but they will help a lot to either boost your damage output or decrease your damage received.

Supports Viable: Any hero that buffs or debuffs that is not fire elemental. (The boss is immune to Sleep, Stun, Silence and Provoke but the mobs isn’t)

Dizzy aoe debuffs, Diene aoe buffs and cleanses, Vivian aoe buffs with immunity. They all either mitigates damage or prevents persisting debuffs which is essential for B10 success.

Pretty much same as your tank, that makes your support sustain longer and allow it to support your run longer.

Molagora: Any decrease cooldown skillups are ideal, it means that your support gets to buff or debuff more often.

The 3 team comps above focuses on completion and consistency, not speed of completion. So, they are slower but they sustain better.

Make sure your healer is capable of keeping everyone alive.

Make sure your DPS does enough damage to kill all 4 mobs spawned by the boss.