The Full Moon Festival kicks off all across Ritania, and Reingar's Moon Coin Hunt begins. Yuna jumps headfirst into the fray...

Check out the last story of Reingar’s Chaotic Full Moon Festival!
The “Chaotic Afterparty” has begun!

Players can access the third week story, Chaotic Afterparty, by preceding to the area on the map or by using the zoom out function on the world map. In order to proceed to Chapter 3, Chaotic Afterparty, players are required to complete [13. Infinity Clock Tower] in Chapter 2, Boisterous Festival.

Exchange Henchman Insignia you collect for great prizes at the Exchange, and collect even more rewards from Quests, Reputation, and Region Rewards! 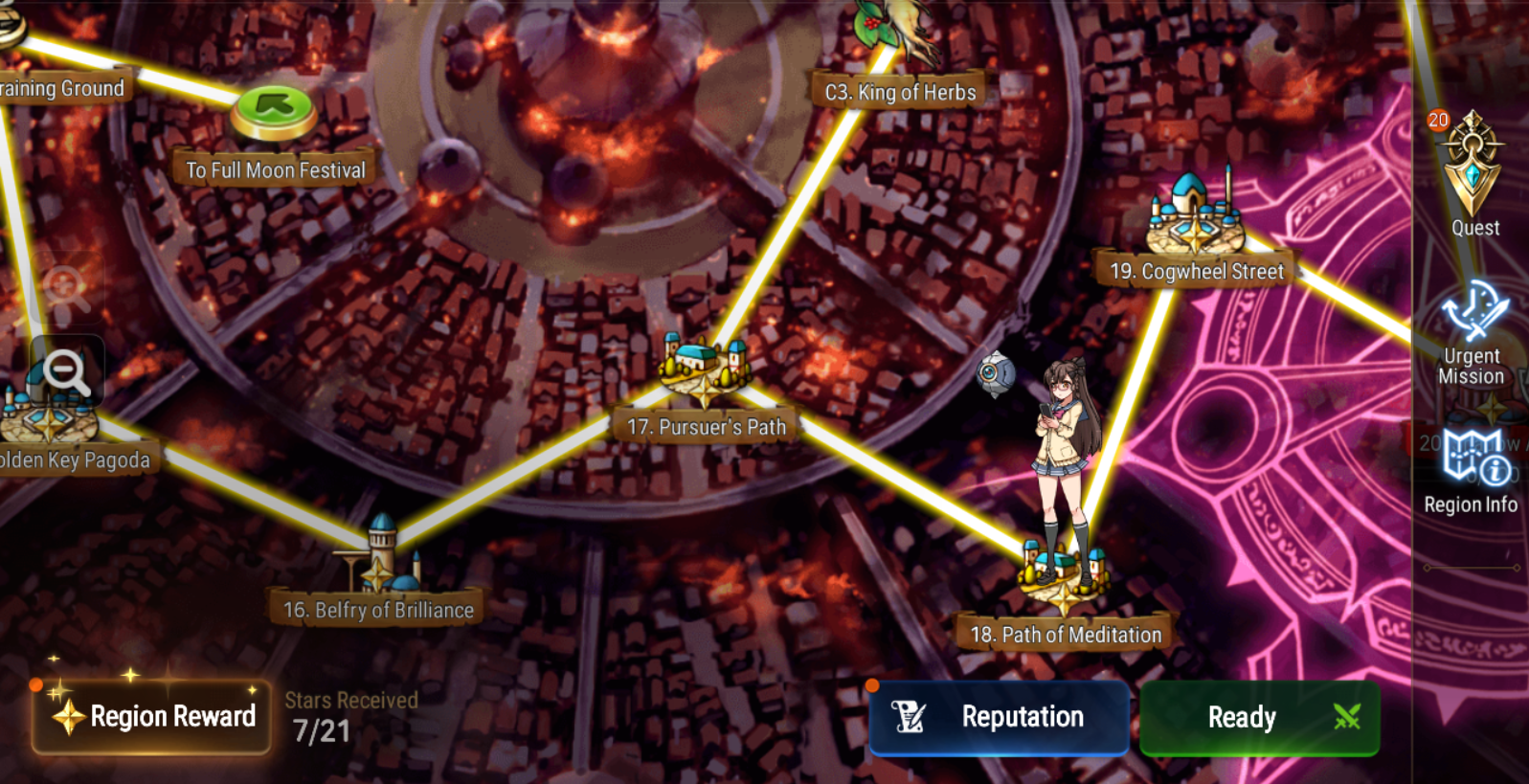 - Chapter 3. Chaotic Afterparty - Stage [20. The Street of Darkness] is comprised of various difficulty levels that players can select.

- At Normal difficulty and above, players have the chance to obtain the Epic Catalyst, Demon Blood Gem. 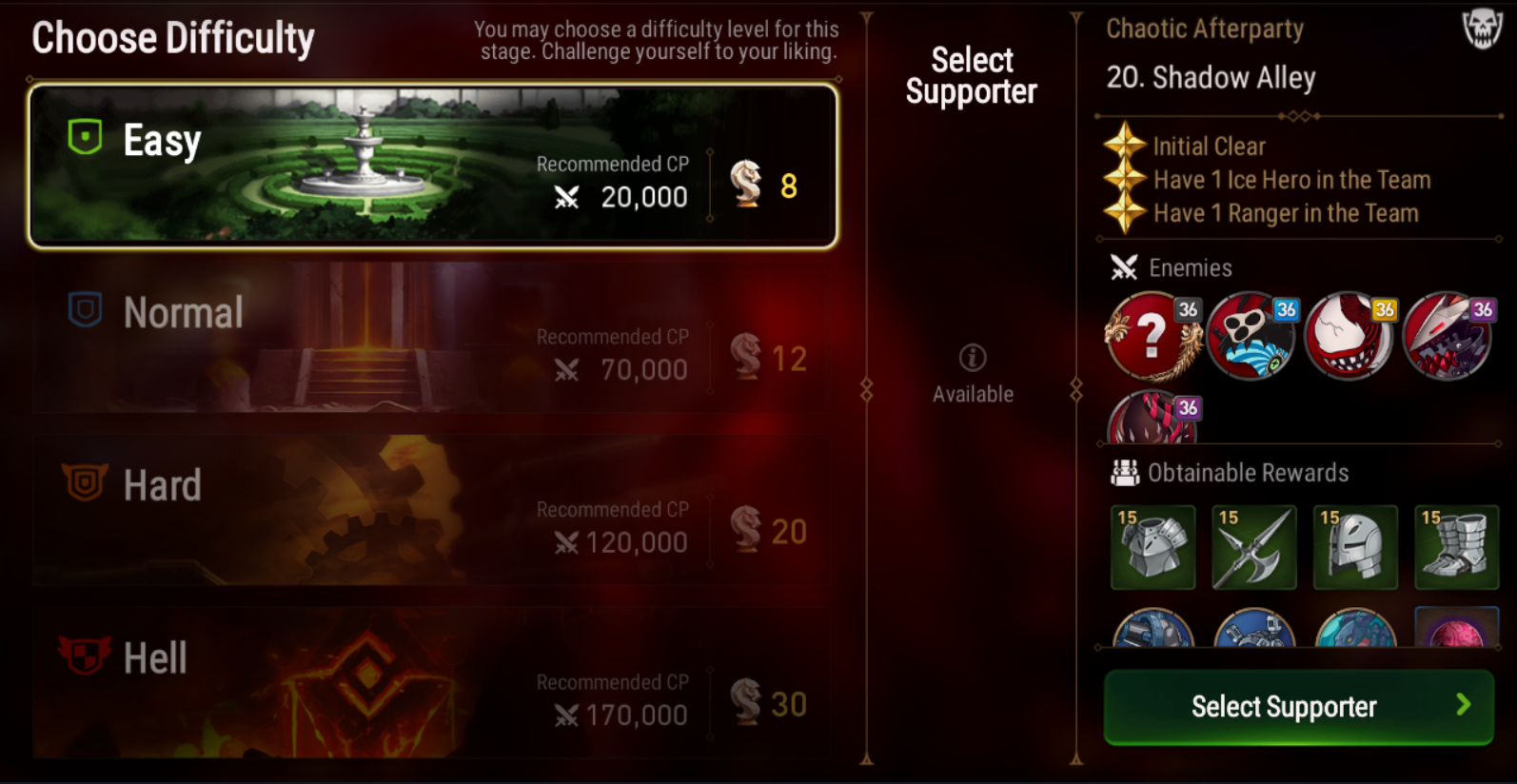 Players have the opportunity to attempt the MolaGora Challenge once again in [C3. King of Herbs] in Chapter 3.

- This stage can only be cleared once during the event period.

- After defeating XXL MolaGora, players will obtain Molagora as a reward. 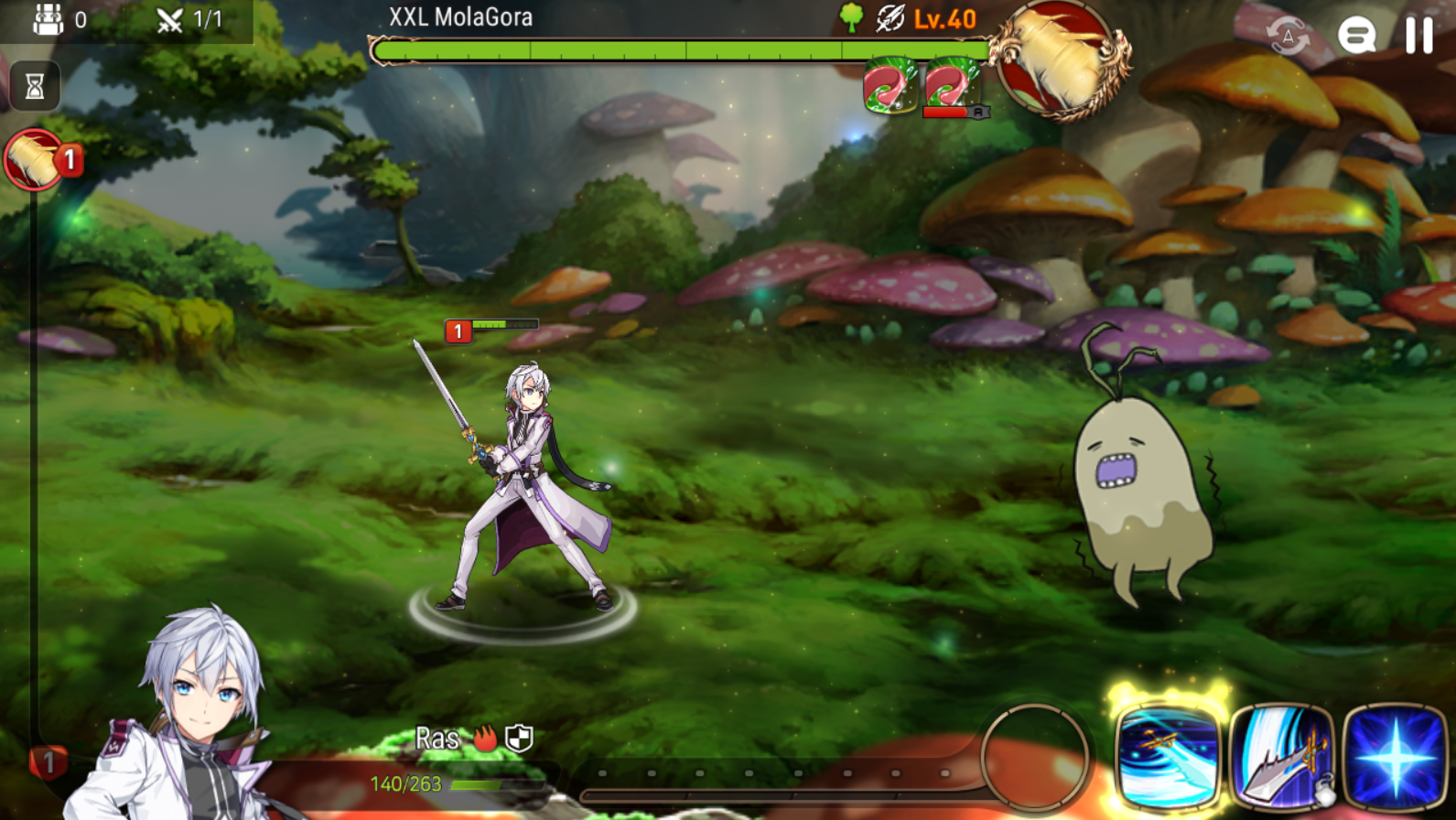 - Locked Stages will require the player to clear a certain Reputation before they may proceed to the next stage.

- [S3. Farewell Hill] in Chapter 3, Chaotic Afterparty, is a stage with a Hidden Story that players can enjoy.

✓ S3. Farewell Hill: Clear the Reputation, You Really Know How to Press My Buttons! 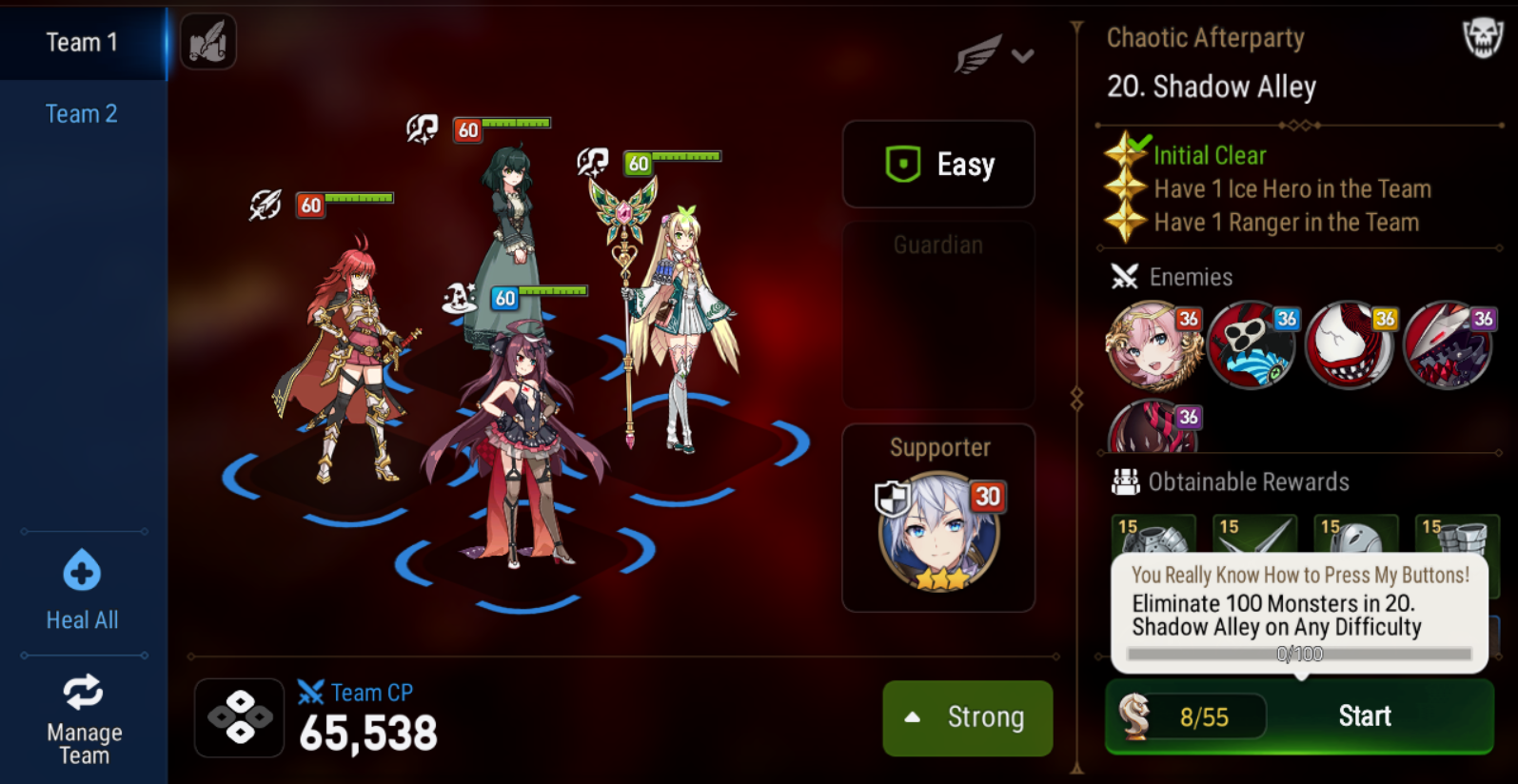 Chapter 3 [D3. Valley of the Autumn Star] is a stage which has a restriction on the number of entries allowed per day.

Players can receive an increased amount of event currency here and can only enter 5 times per day.
This restriction is reset at your daily server reset time. 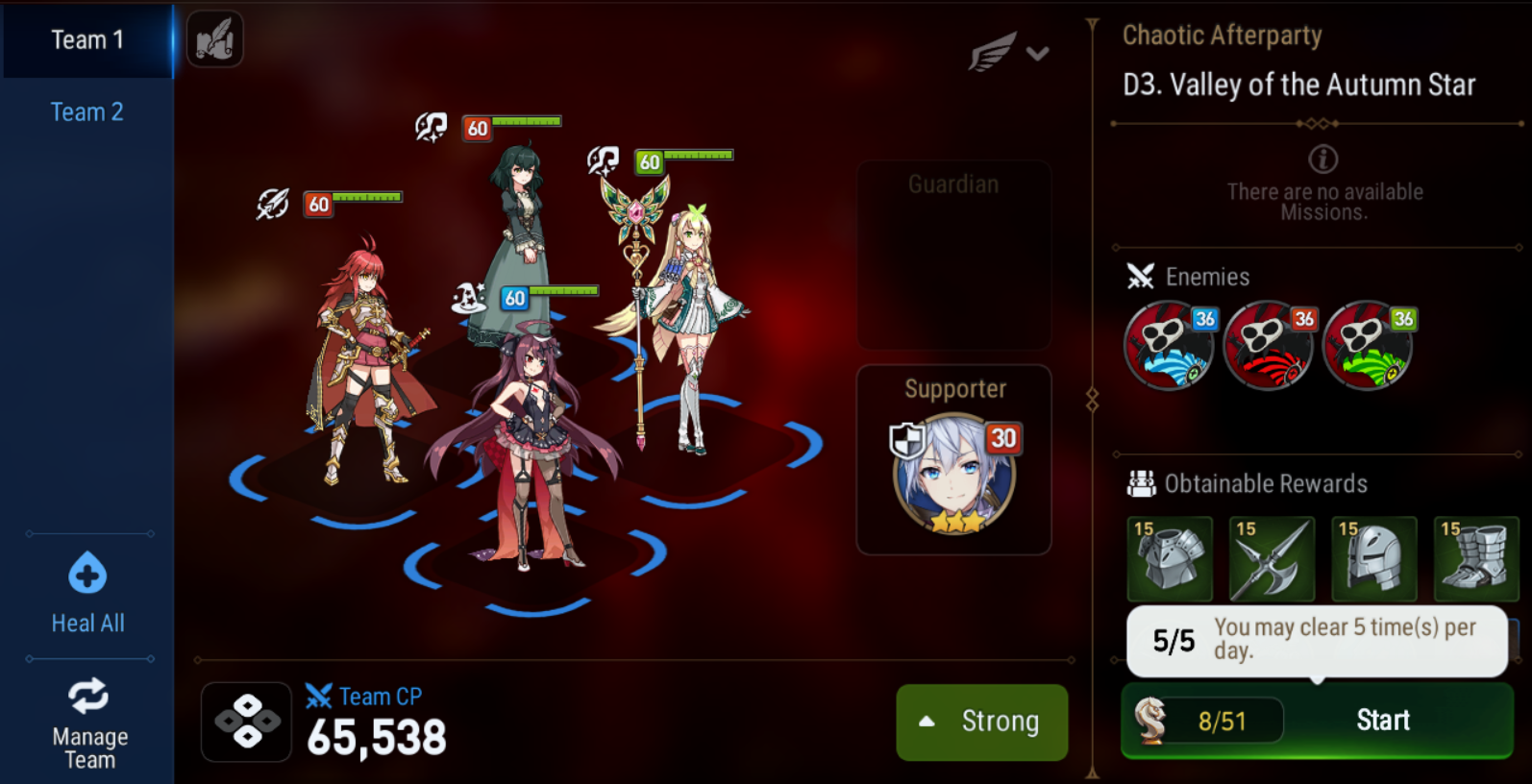 - In Chapter 3, Stages 14 to 20, there are 3 missions per stage that can be cleared, which, upon completion, will provide players with Skystone as a reward.

Players will be able to access Huche’s Pop-Up Shop!

*Huche will disappear once the period is over.

- Players can access the Pop-Up Shop by tapping on Huche in the lobby.

- This Pop-Up Shop is only available for the period that Huche is visiting.

- The item list in the Pop-Up Shop will not change during this period. However, there is a purchase limit.

- The item list in the Pop-Up Shop may change when Huche visits next time.

- Exclusive equipment can be crafted when the Alchemist’s Steeple Laboratory Building is at Level 3.

- Exclusive Equipment can be crafted once per day.

(The amount of Gold required can be differ depending on the level of Alchemy Academy.)

- There is no limit on the exclusive equipment used for the ingredients.

- With ‘Epic’ quality grades, the player will be able to craft an exclusive equipment with maximum stat possible, as well as skill enhancement effects of player’s choice.

(* The number of ingredients needed to increase the quality grade to Epic differs depending on the level of Ingredient Storage.)

- All players will be able to purchase Yuna in Reingar’s Chaotic Full Moon Festival’s Exchange. (Players who already purchased Yuna from the Exchange cannot re-purchase.)
- An issue where, Fallen Cecilia’s Strong Instinct skill tooltip for skill enhancement not showing when skill has not been awakened, has been fixed.

- The tooltip for Basar’s skill, Hurricane has been improved. There are no functional changes.

- The tooltip for Lidica’s skill, Thornbush has been improved. There are no functional changes.

- Equipment inventory size will increase to 450. The expansion cost is the same as before.

- Rose’s exclusive equipment, Valkyrie Wing’s tooltip has been improved. There are no functional changes.

- The rules for barriers casted in battles are improved.

- Seven new 2★ monsters who appear in Witchaven have been added to the Friendship Summon and Secret Shop.

- Typos in Episode 2 Chapter 3 Mining City Aakhen have been fixed.

- In Reputation, NPCs and descriptions about Hall of Trials achievements in Conclave category were adjusted to fit the category it belongs.

- A Replay function is added in Abyss. Entering already cleared Abyss floor does not need Abyss entry tickets, and no rewards will be given.

- The Game Guide that appears after losing a battle is added to the menu when the battle is paused, so that players can find more about the battles.

- A lock icon is added to Great Achievement menu in Guild.

- An issue where certain words not being available in Team names has been fixed.

- A comma is added to the amount of Gold displayed when the opponent list is refreshed in the Arena.

- Fixed an error in the Hall of Fame in Arena on Season 1 period and player’s guild information.