Heirs will now be able to go on adventures in Episode 2, Chapter 4, City of Sorcerers Witchaven!

Researcher Carrot and the Mysterious Transfer Student have appeared in Orbis! Check out Angelica’s new skin in the Epic Pass!

We also have other exciting content for you like the Pop-Up Shop, Quality of Life improvements and more!

Please see below for more details!

The City of Sorcerers Witchaven, where Sorcerers who faced persecution for the fall of the Kingdom of Perlutia found refuge is now open.

- Players will be able to enter this region once they clear Cidonia stage [3-10. Southeastern Outskirts of Aakhen].

- Players will receive a Merchant Guild Request once they clear [4-10. Emerald Garden].

- Players will be able to use AP Exchange when they clear the Merchant Guild Request. 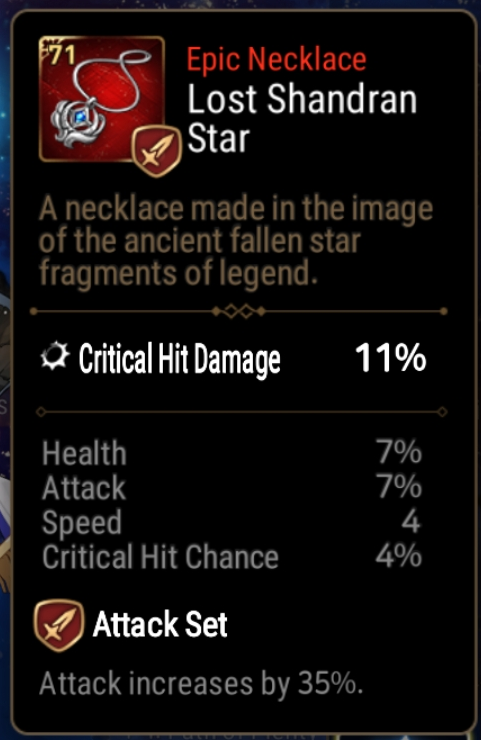 - A story journal for Episode 2 Chapter 4 has been added.

- Players will be able to obtain Tree of Old Memories background pack as a Chapter 4 reward.

The 3★ Hero Carrot can now undergo a Specialty Change!

Also, some of the 3★ Hero Carrot’s skills have been changed!

After completing the Specialty Change, Carrot will be granted a new sprite, new skills, and new animations!
Additional stat changes and skill enhancements can be made via the Skill Tree. 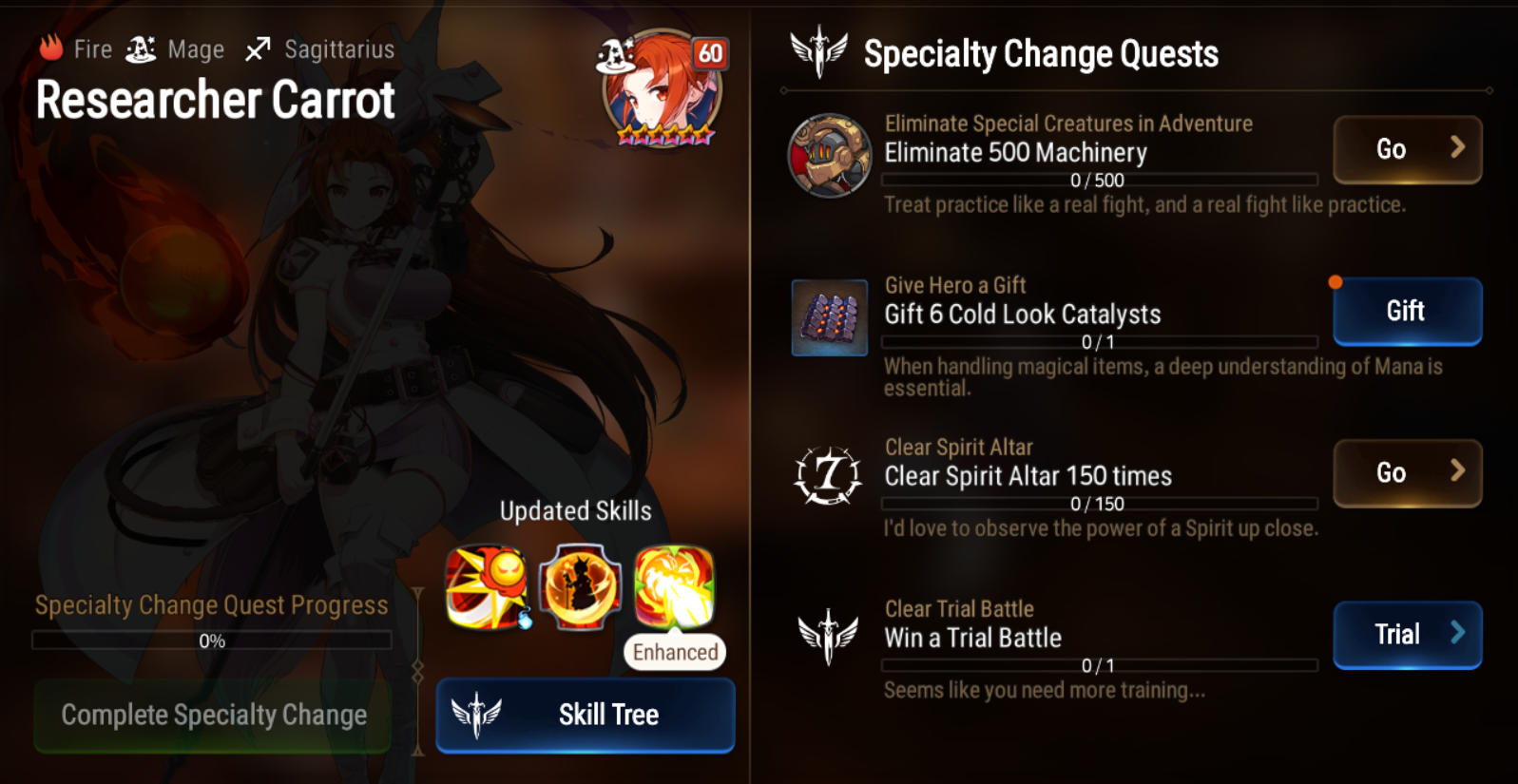 - Increases Effectiveness of allies by 5%.

- The chance to dispel one debuff inflicted on the caster when Flame Barrier is activated is increased by 50%.

- When the caster is attacked at max Health, decreases damage received by 25%.

- Adjustments have been made to the skill, Swing.

- A Soulburn effect has been added for the skill, Swing.

- Adjustments have been made to the skill effects for Flame Barrier and barrier strength has been increased by 50% compared to before.

- Skill enhancement adjustments have been made for the skill, Flame Barrier.

- The Soulburn effect for the skill, Blaze Explosion, has been removed.

Receive a variety of rewards with the “Epic Pass” which also includes a unique Epic Pass Season 2 Frame as well as Angelica’s “Mysterious Transfer Student“ skin!

Use the designated currency to obtain a variety of rewards!

On the left side of the lobby, players can enter the Epic Pass area by tapping the icon.

As you increase your Season Rank, you can earn a variety of rewards!

1. Standard Reward: Players can receive basic rewards by increasing their Season Rank during the season.

2. Premium Reward: Reward that can be acquired when the Pass is upgraded to Premium Epic Pass.

3. Special Reward: Reward that can be acquired when the Pass is upgraded to Special Epic Pass.

- Players can receive season EXP by spending the following currencies in different game modes. For every 5,800 EXP you obtain, the season rank will increase.

- A new currency, Book of Retribution has been added.

Players can tap the icon shown below in order to view the EXP granted by using the various currencies in the game.

Players can use 100 Skystones to increase their Season Rank by 1.

Players can upgrade to the Premium Epic Pass or Special Epic Pass by using Skystones. 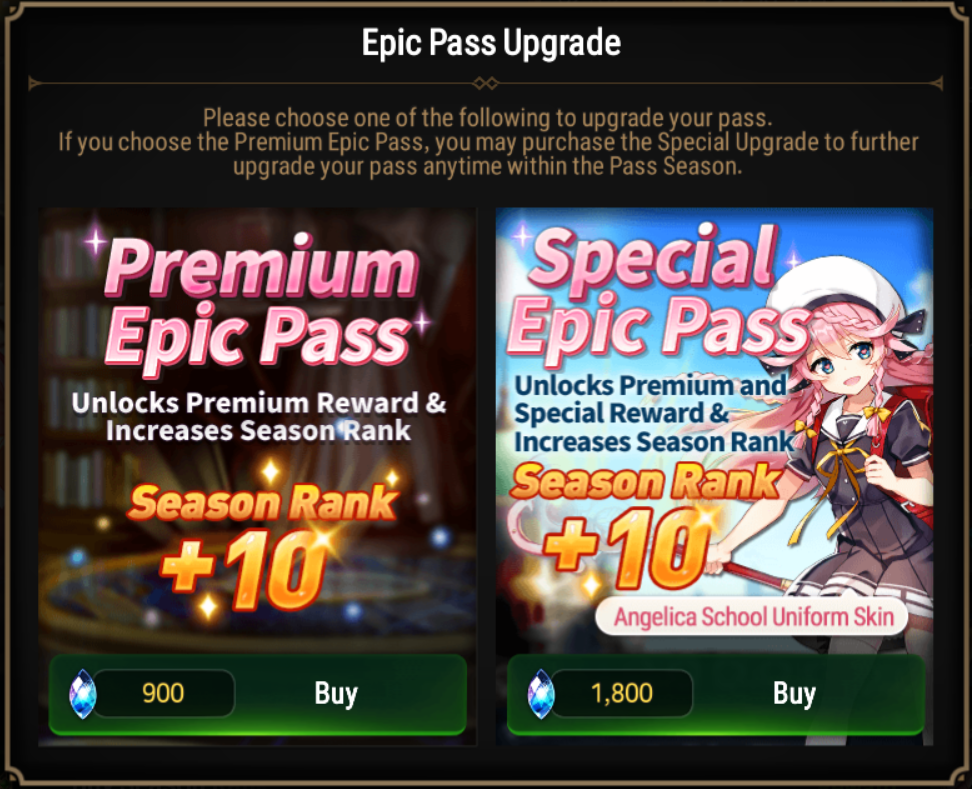 The illustration and cut scenes will change when this skin is equipped on the 4★ Hero, Angelica.

A new Boss, Nilgal, will be added in Hall of Trials for the Pre-Season.

As well as a new boss, new sets of exclusive equipment will also be added at the Hall of Trials exchange.

After clearing [6-1] Northern Wind Corner in Ritania, go to the Lobby and tap [Battle]> [Hall of Trials].

- The Hall of Trials is weekly content and players can enter using Book of Retribution.

- You can battle with bosses that appear following the weekly schedule.

It will reset every Monday at the server reset time.

- Book of Retribution is a ticket required to enter the Hall of Trials.

- 3 Book of Retribution will be distributed every week on Monday at the server reset time.

- Players will be able to purchase Book of Retribution from the shop using Skystone.

- A new boss Nilgal will be activated.

- Nilgal’s advantages and disadvantages will be changed as stated below:

- The number of points and rank will increase according to the amount of damage dealt to the Boss.

- The Hall of Trials consists of 3 battle phases and 2 weakened phases.

- You can obtain additional points when you defeat the Boss.

- The effects of Berserk and weakened states will be applied as it did with Kayron.

- The Boss will be in a state of Berserk when their Berserk Gauge is full.

- When the Boss is in a state of Berserk, their stats will greatly increase and they will become even more powerful.

- When the boss's Health reaches 0, they will become paralyzed and receive increased damage.

- If the Boss’s gauge fills up when they are weakened, they will be released of their paralyzed state and become even stronger.

- Once the Boss is out of a weakened state, all effects applied to the boss will be dispelled and their Health and Combat Readiness Gauges will be restored to 100%.

- Exclusive equipment for Guider Aither, Yufine, and Armin is added.

- Exclusive equipment Stats and skill effects will be randomly applied when this equipment is purchased. 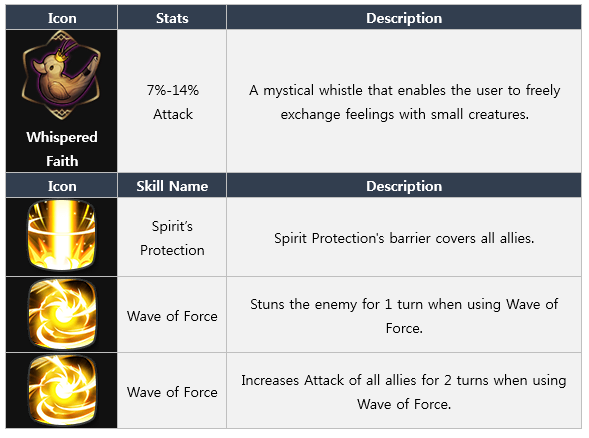 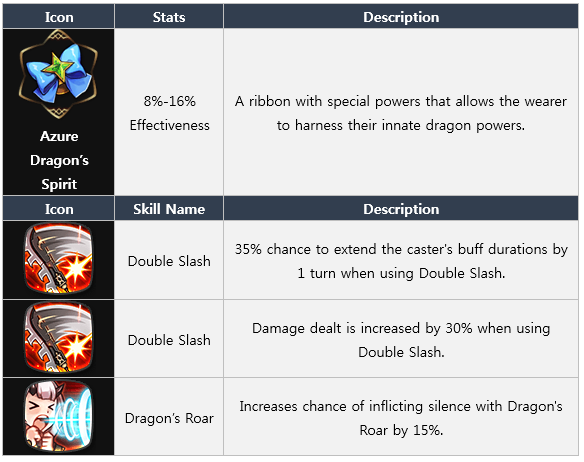 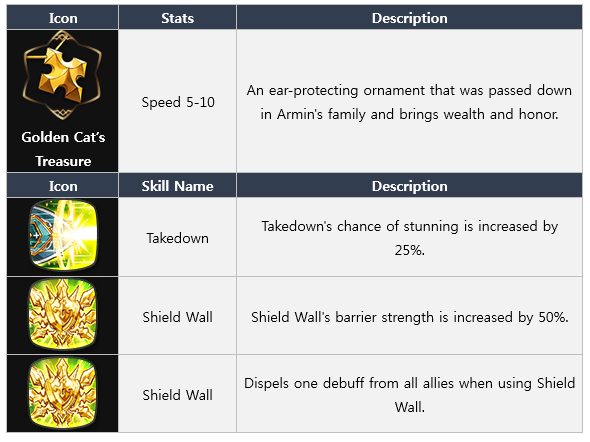 The Boss monster’s advantages/disadvantages descriptions in the Hall of Trials are improved. There are no functional changes, but just the words are edited for better understanding.