Furious, the stubborn Citylord of Aakhen has been added. Players can obtain Furious through connections or summon.

Players can obtain Furious by completing all connection missions.

Players will be able to begin the connection quest once they clear Cidonia stage 3-10. Southeastern Outskirts of Aakhen.

The [Challenge] Training Grounds has come to an end and Hall of Trials has been added. During the Pre-Season, the Boss, Kayron, will appear and will have different characteristics every week.

After clearing [6-1] Northern Wind Corner in Ritania, go to the Lobby and tap [Battle] > [Side Story].

- The Hall of Trials is weekly content and players can enter using Book of Retribution.

It will reset every Monday at the server reset time.

- Book of Retribution is a ticket required to enter the Hall of Trials.

- 3 Book of Retribution will be distributed every week on Monday at the server reset time.

- Players will be able to purchase Book of Retribution from the shop using Skystone.

- Select the Boss that is currently active.

- Players are able to see the advantages and disadvantages of the Boss. Form a team that will cause the most damage!

- Currency that is required to enter will be deducted at the end of battle.

- Players will not be able to use Guardians or Supporters in their team.

- In the Hall of Trials, players will not be able to use Soul burn skill as the Soul Gauge will not fill.

- If you select Practice Battle when entering, then no Book of Retribution will be consumed and no rewards will be received.

- Use practice battles to come up with the best team.

- The number of points and rank will increase according to the amount of damage dealt to the Boss.

- The Hall of Trials consists of 3 battle phases and 2 weakened phases.

- You can obtain additional points when you defeat the Boss.

- The Boss will be in a state of Beserk when their Berserk Gauge is full.

- When the Boss is in a state of Berserk, their stats will greatly increase and they will become even more powerful. Defeat the Boss before he goes Berserk!

- When the boss's Health reaches 0, they will become paralyzed and receive increased damage.

- If the Boss’s gauge fills up when they are weakened, they will be released of their paralyzed state and become even stronger.

- Once the Boss is out of a weakened state, all effects applied to the boss will be dispelled and their Health and Combat Readiness Gauges will be restored to 100%.

- The battle ends when all allies are defeated or when the Boss is defeated.

- Players will obtain the currency, Wisdom’s Gaze, according to the result grade.

* Rewards according to grade

- Wisdom’s Gaze is a currency required for the Hall of Trials Exchange.

- The higher the grade, the more Wisdom’s Gaze a player will obtain.

- Exclusive equipment Stats and skill effects will be randomly applied when this equipment is purchased. 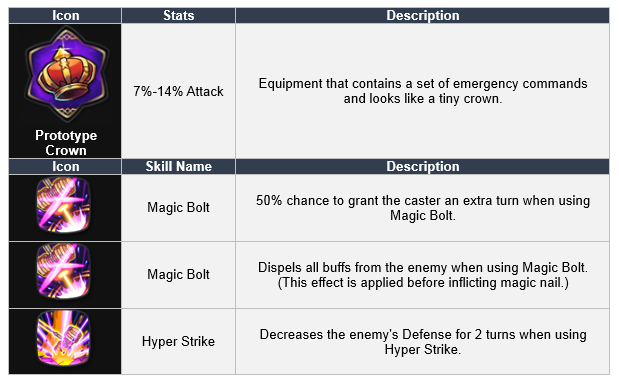 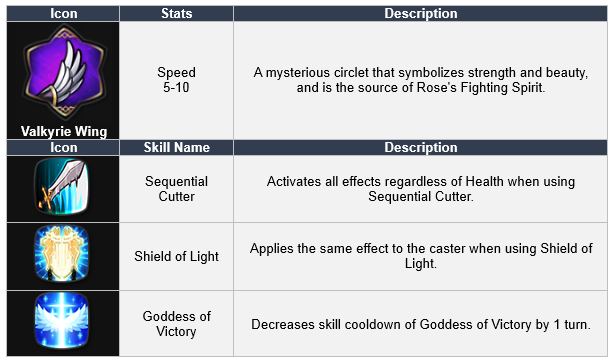 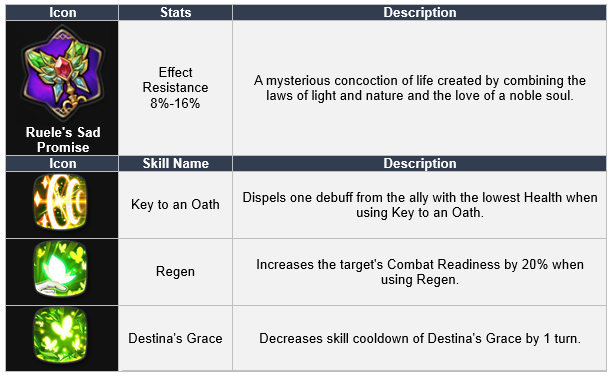 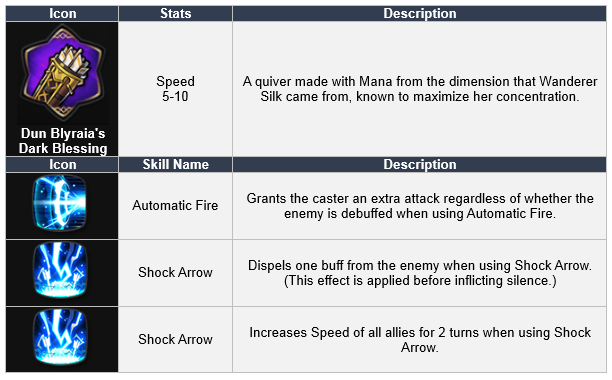 - Previously obtained rewards and achievements will be maintained.

- The regular season will begin once the pre-season ends and a new boss will be added.

- Please note that once the regular season begins, there may be some balance adjustments made to the Boss’s characteristics, battle, and rewards.

- We have made plans so that once the pre-season ends, players may craft exclusive equipment in the Alchemist’s Steeple that has a skill they desire.

Certain Heroes will be able to use Exclusive Equipment with this update.
Exclusive equipment can be obtained in the Exchange area in the Hall of Trials

The applicable Hero must have been 5★ Awakened or higher.

- Players can view and equip the Exclusive Equipment that is owned.

- When equipped, the Exclusive Equipment will provide a benefit to a certain skill and stat. 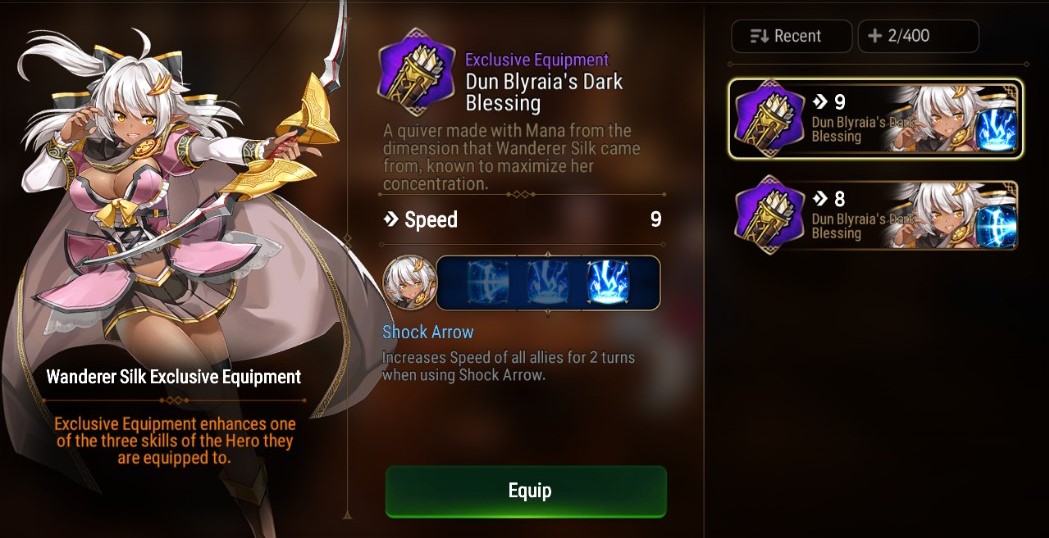 - Skills enhanced via Exclusive Equipment can be identified by a unique icon frame.

- The cost to unequip Exclusive Equipment is 25,000 Gold.

The buff/debuff skill description has been improved to show the actual values now.

10. Bug Fixes and Other Improvements

- Violet’s relationship has been added.

- Fixed skill description for skills that apply an effect to the ally with the least Health. There are no functional changes

- The tooltip for Ken’s skill, Celestial Kick has been improved. There are no functional changes

✓ Kicks the enemy, increasing Speed of the caster for 2 turns, with a 75% chance to decrease Defense of the target for 2 turns. Gains 40 Fighting Spirit when an enemy is defeated. When the caster is granted vigor, chance of decreasing Defense becomes 100%, ignoring Effect Resistance. Damage dealt increases proportional to the caster's max Health.

- The text “Damage dealt increases proportional to the caster’s Defense” has been added to Rose’s skill tooltip. There are no functional changes.

- The text, “Damage dealt increases proportional to the caster’s Defense” has been added to Fighter Maya’s skill tooltip for the skill Strike of Provocation. There are no functional changes.

✓ Attacks with a blunt weapon, with a 50% chance to provoke for 1 turn. Damage dealt increases proportional to the caster's Defense.

- An issue where Sol’s skill, Volcanic Viper, did not receive the effect of the Artifact, Uberius's Tooth, has been fixed.

- An issue where, Chaos Inquisitor, when dispelling an enemy’s buff by counterattacking, did not receive an increase in his Combat Readiness has been fixed.

- An issue where, Seaside Bellona’s skill, I'm with My Friends, shared damage with a character that was not the foremost Ally has been fixed.

- An issue where, Seaside Bellona’s attack, You’re Not Cute, would not target stealthed enemies has been fixed.

- An issue where Apocalypse Ravi would not gain Fighting Spirit after using her Soulburn has been fixed.

- Improvements have been made to show the number of stacked effects instead of text.

- Text will be displayed at the start of battle for Oath Key when activated.

- Text will be displayed when Sigurd Scythe is activated when the player’s health is below 50%.

- Text will be displayed when Holy Sacrifice is activated.

- Text will be displayed for Rosa Hargana before the start of the turn and at the end of the turn.

- The skill tooltip for the monster, Blood Slime, has been improved. There are no functional changes.

✓ Weighs down the enemy, decreasing the enemy's max Health by 5%. Each time this skill is used, the amount decreased is increased.

- An issue where, some passive skills/Artifacts which were triggered based on Health, were not immediately applied in certain situations has been fixed.

✓ Artifacts: Egg of Delusion, Sword of the Morning, Mighty Yaksha

- The Soulburn effect text when decreasing skill cooldown has been improved by specifying the number of turns by which cooldown is being decreased. There are no functional changes.

✓ All skill cooldowns decreased by 2 turns.

- An issue where the effects of Magic Nail were not being immediately applied when inflicted targets are attacked has been fixed.

- An issue where, after a passive skill has been activated, skill text would display incorrectly has been fixed.

- An issue where a stage would not unlock when traveling from Ritania’s Levulin area to Ezera has been fixed.

- Some typos in Episode 2’s main story have been fixed.

- An issue where, in the Royal Capital Azmakalis, when Sol used his skill, Volcanic Viper on Secretary Vera after its transformation, and caused the silence debuff to be inflicted even when Vera is granted with immunity has been fixed.

- An issue where, in the Royal Capital Azmakalis, when Sol used his skill, Volcanic Viper on Juleeve Council after merging and caused the silence debuff to be inflicted even when Juleeve Council is granted with immunity has been fixed.

- The timer for Protector's Punishment now displays during the Arena.

- An issue in the Automaton Tower where, Jealous Aztesta skill, Mana Explosion, had a 1 turn skill cooldown reduction applied at the start of battle has been fixed.

■ Guild
- Improvements have been made so that when a player is selecting teams for a Guild War, the scroll of the Hero list has changed so that it will remain in a fixed location.
- An issue where the Guild War Result did not display the ranking range has been fixed.

- When the game crashes during the middle of a Guild War battle, the results of that battle will no longer be recorded regardless of whether the player has won or lost.

- An issue where, in certain situations on Defense, when moving Heroes in a new location, slots for a team for one round would be empty has been fixed.

- An issue where, upon touching the Mystic Medal icon while in the Mystic Summon area, the player would be moved to an empty store has been fixed.

- Dates displayed in game had typos corrected and the notation style for the dates have been unified.

- Penguin levels will no longer display when receiving them as a reward.

- The help icon [?] button location has been adjusted.

- Improvements have been made in the Equipment upgrade tutorial, where the player no longer has to upgrade Equipment by using Charms.

- The Preview and Details button for Specialty Change have been changed so they display depending on the situation.

- The push notification that is sent after 24 hours of not logging in has been changed.

- An issue where, when moving to another Hero’s page via relationship page in the Hero Journal, the Hero’s stars would flicker has been fixed.

- An issue where in the Manage Equipment section, under certain situations, the secondary filter did not work has been fixed.

- An issue where, after an attempt to make an in-game purchase on an Android device, the back button did not work as intended has been fixed.

- An issue where Hero promotion materials were not displaying at the top of the list has been fixed.

- Typos and overlapping text have been fixed in various languages.