Bellona came to provide Reingar PSC with any help they needed to assist visitors from Reingar. Although she says she's here to watch over Sez, it seems that her true goal is to relax in the resort.

A ranger exclusive Artifact which causes additional damage when attacking all enemies has been added! 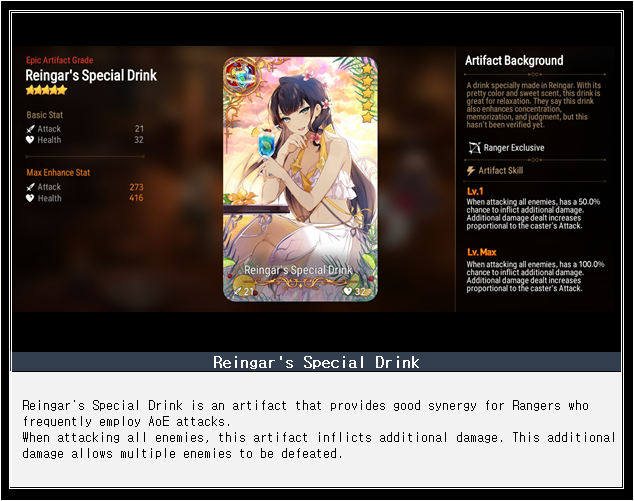 Meet Seaside Bellona, who sprays her enemies with a powerful blast of water and the Artifact, Reingar’s Special Drink, which causes additional damage when attacking all enemies in this special Drop Rate Up event!

The Drop Rate Up applies during the event period only. Players are able to use both the Limited Drop Rate Up Banner as well as regular covenant summons. The 5★ Hero, Seaside Bellona and the 5★ Artifact, Reingar’s Special Drink are both limited summons and will not be added into the Covenant Summon after the event has ended. During Seaside Bellona’s limited Summon event, when using her banner, the drop rate is increased to 1% and no other 5★ Heroes can be summoned. This Hero and Artifact may be sold in the same or similar form in the future.

1) For this Drop Rate Up banner only, the limited summon system in effect.

2) When players summon during the banner, the summon counter will decrease by 1 for each summon that does not yield the banner Hero (max 120 summons).

3) If the Hero has not been summoned after the listed number of summons (120), the next summon is 100% guaranteed to be the banner Hero.

4) Summoning the Hero in the banner will result in the guaranteed summon counter being reset to the original number.

4. Special Side Story - 'Song of the Sea' Ending

Week 2 and 3 of the special side story, Song of the Sea, has begun.

■ How to Enter
After reaching Account Rank 9, go to the Lobby and tap [Battle] > [Side Story].

- Treasure chests and Goblin Gates that appear in this side story will not contain event currency.
- The Achievements and the Summer Pass provide the same rewards that the Exchange would have provided.
- From Normal difficulty and higher, players have the chance to receive the catalyst, “Fused Nerve” after defeating a boss.

- [17-S1. Salt Pillar Passage] is a defense stage that consists of Easy, Normal, Hard and Hell difficulties. Players may only choose a higher difficulty level after completing the preceding difficulty level. Depending on the difficulty level selected, the number of battles as well as the monster compositions will vary.

The accessories granted by successfully clearing certain stages of the Automaton Tower have been improved.

■ Accessory Reward Changes
The accessories granted to players for clearing Floor 65 and higher have been increased.

※ Four sub-stats will be randomly assigned upon receiving the accessory.