In these dev notes, we will discuss the launch of Arena Season 2, Hero rebalancing, and further improvements to Hero development.

Our intention and hope has always been to encourage players to not only enjoy the process of developing different Heroes, but also to feel value from the results. We accordingly made MolaGora requirement adjustments and improved Equipment farming in the past. However, we still believe that there is more room for improvement.

We intend to encourage the use of a wider variety of Heroes for Arena Season 2. As a result, we plan on making further adjustments to the MolaGora requirements and streamlining Catalyst farming. Along with the start of Arena Season 2 and the aforementioned changes, we expect to see the development of new Heroes and new, unique team compositions.

Because we are still in the process of implementing these improvements, please note that there may be changes at the time of the actual update.

Epic Seven's Arena is a place where our most dedicated users can showcase their creativity and accomplishments. We believe that the rewards and honor of Arena should reflect the competitiveness and the difficulty of climbing the rankings. However, after reviewing Arena Season 1, we noticed that some aspects of Arena discouraged players from continuously participating and ranking up in Arena. Therefore, we made changes and added new features to Arena to help mitigate these issues.

First, if the player has what it takes, the process and the rewards for ranking up will be improved to offer more gratification.

In Arena Season 2, players will only be dropped down by two leagues after the Weekly Ranking Change in order to minimize the effort required to climb back up. Moreover, we intend to update the upper tier matchmaking system so that players will be up against formidable and adequate opponents. 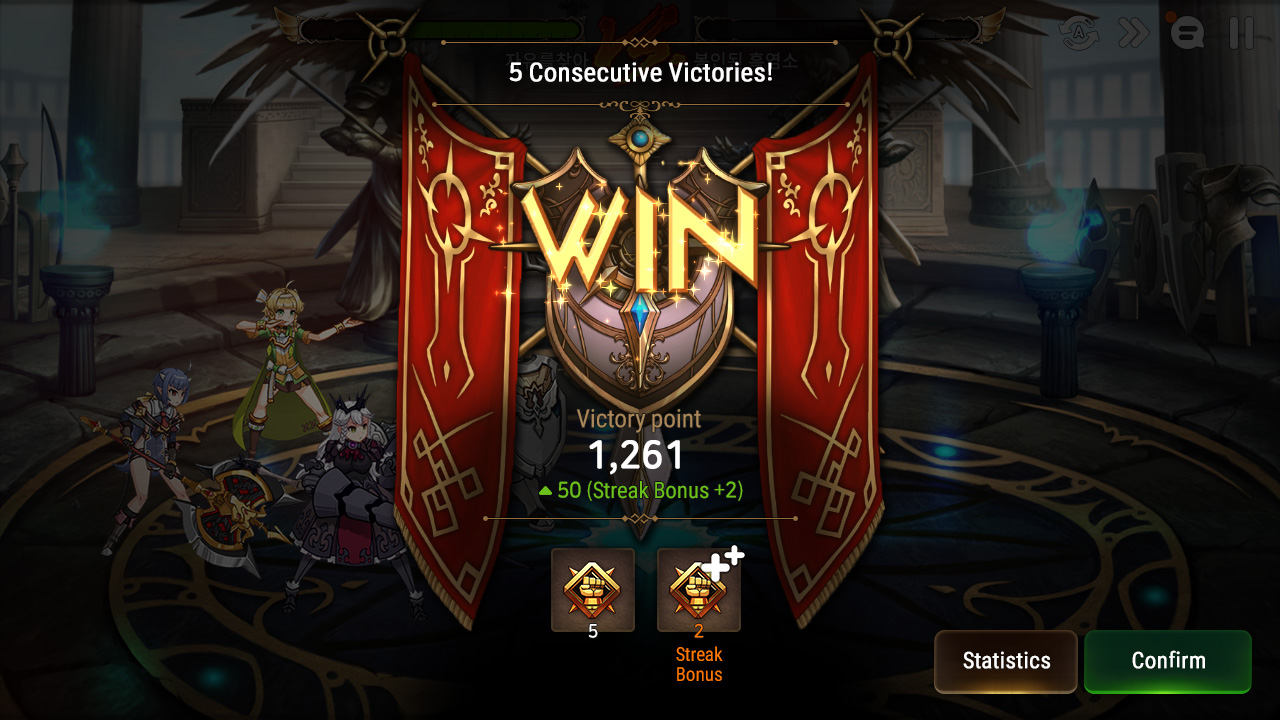 Furthermore, there will now be a win-streak bonus (up to 10 wins) and depending on the tier, the bonus will grant additional points and Conquest Points. With these changes, Heirs with enough skill and capability will be able to reach higher tiers more easily. However, there will be a few exceptions to the win-streak bonus. For instance, the bonus will only apply to attacks and will not be affected by NPC Challenges.

Players will also be able to view their seasonal and weekly win rate and successful defense rate in Arena. This feature will allow players to view their statistics and better organize and research team compositions for Hero development. 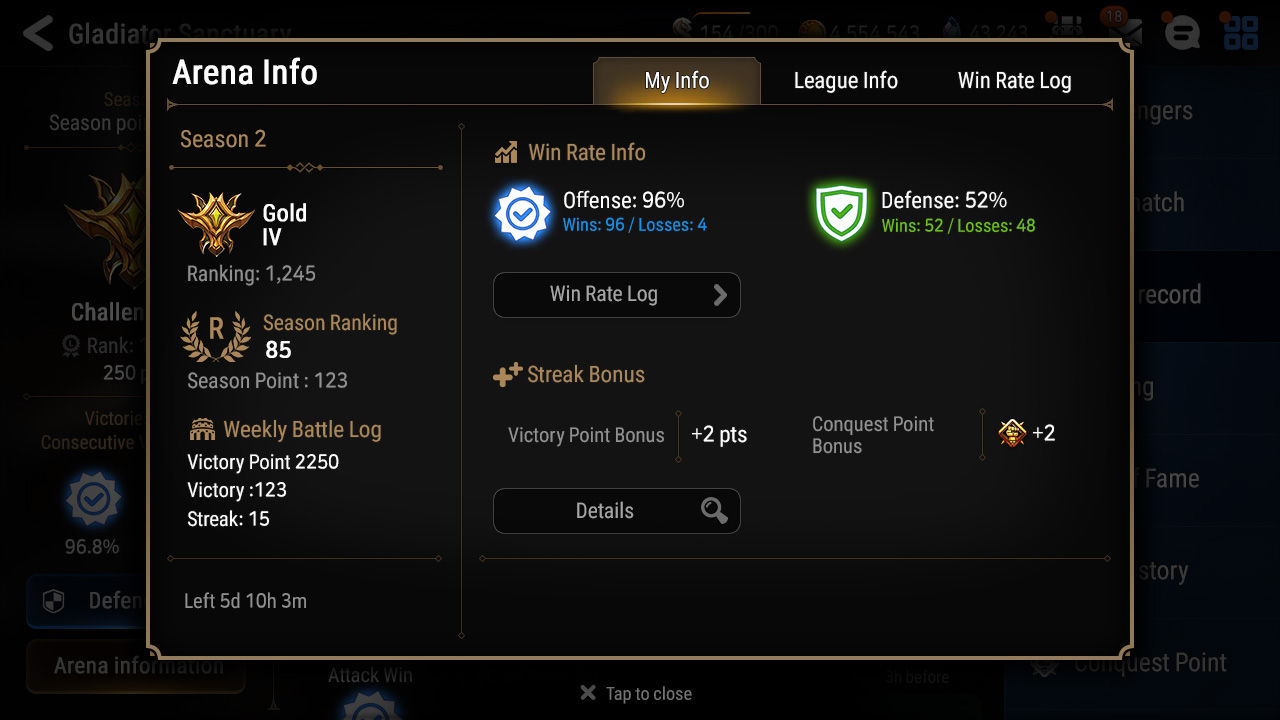 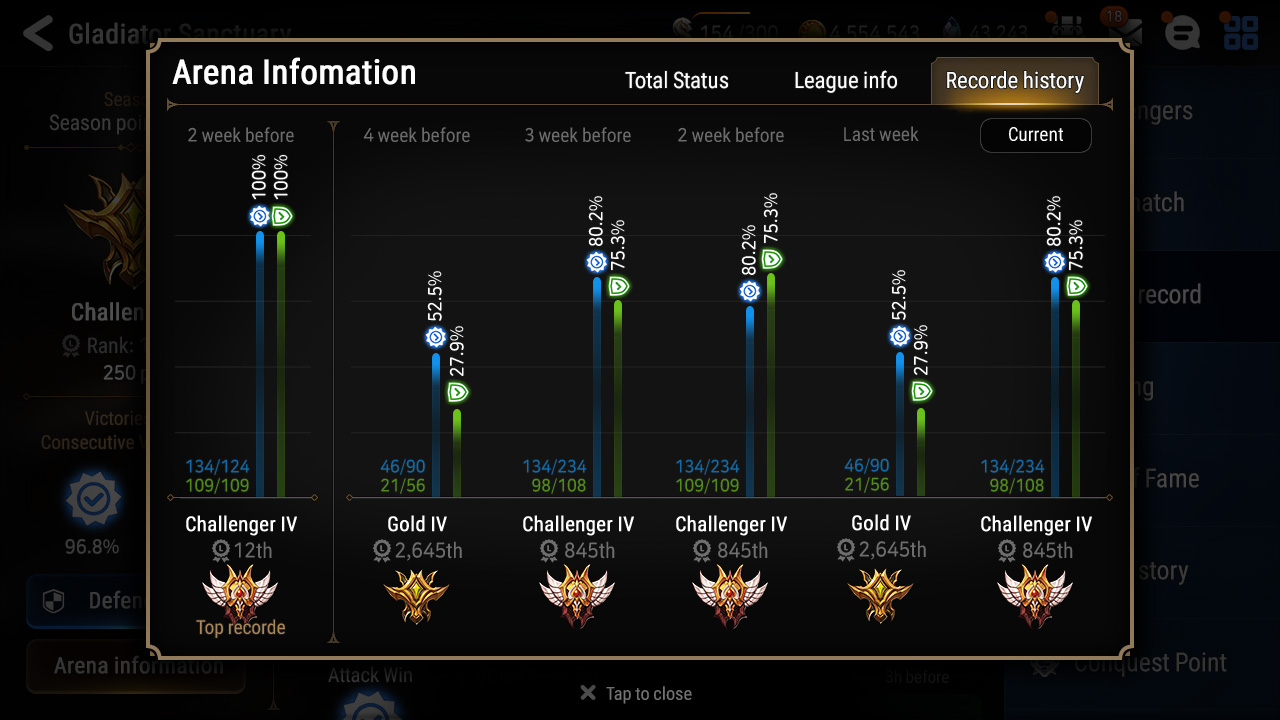 We also can't forget about the Unknown Slate and new Arena Season 2 Equipment. In Arena Season 2, players will need an additional form of Arena currency, Glory Crests, to purchase the aforementioned items. Glory Crests will be given at the end of each Weekly Ranking Change, but can also be obtained by regularly participating in Arena. With these Glory Crests and Conquest Points, players will be able to purchase level 88 Season 2 Equipment and new frame designs for their Rep Heroes. Please note that Glory Crests will be reset at the end of the season. Don't forget to use them before it's too late! 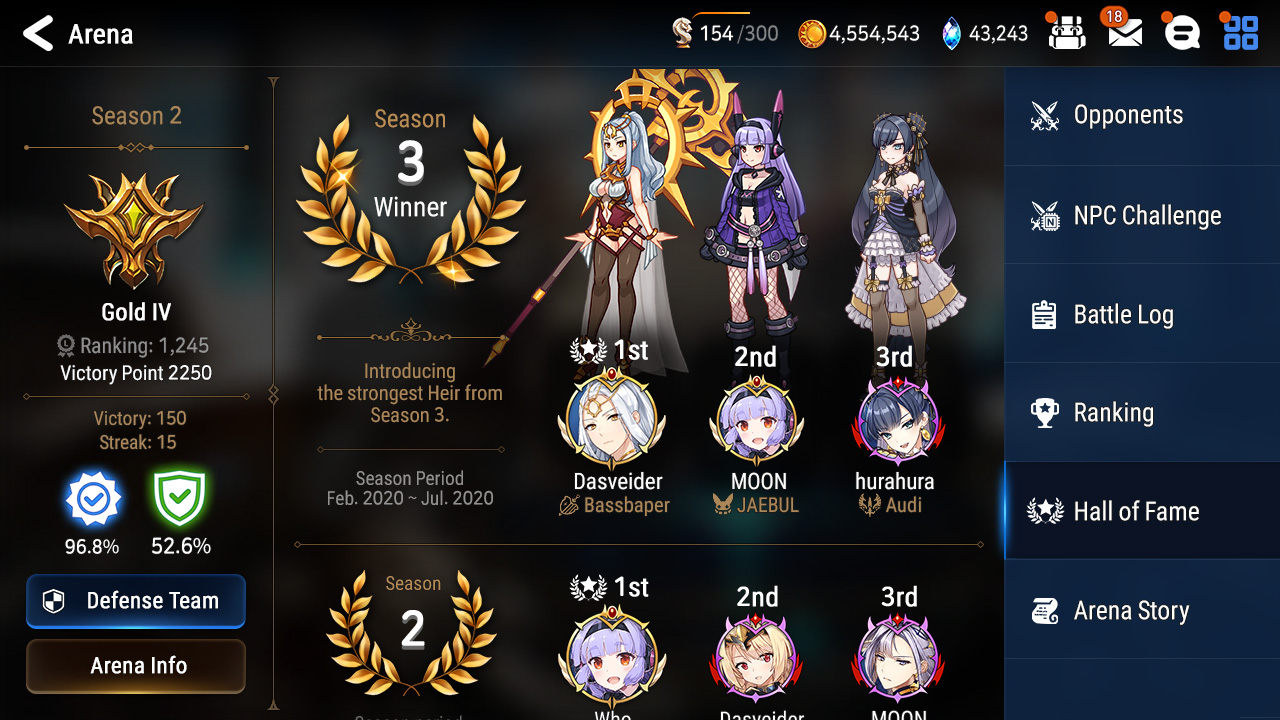 We plan on improving Arena every season and we hope that all of our Heirs continue to support, participate, and enjoy it!

The goal of Hero rebalancing is to encourage players to use different Heroes for different content within Epic Seven. In regards to PvP, players should be able to strategize and battle effectively against certain team compositions.

Our team has been keeping close track of which Heroes are being used the most for each mode within the game. After careful analysis, we have decided to make improvements to increased effect percentages from Awakening for specific Heroes. We also plan to balance overpowered Heroes who severely affect the current meta with no counters. Any Heroes directly affected by these changes will be available for recall, and players will be able to receive all currencies and materials used for these Heroes. Lastly, we plan to improve Heroes who haven't been able to be effective and used as intended.

A more detailed account of the Hero balances will be posted at a later date.

We will try our absolute best to monitor all Heroes to ensure that they all have a chance to be utilized and valued.

After conducting thorough research on the status of Hero development in terms of cost and value, we still believe that some obstacles remain. One of the biggest obstacles is the number of MolaGoras needed to enhance skills.

Epic Seven Heroes were designed to be potent with the assumption that their skills had been enhanced. However, the number of obtainable MolaGoras had been limited. Especially, the higher levels of Skill Enhancement required too many MolaGoras compared to the increase in skill effect. This served as a huge roadblock for attack Heroes who required Skill Enhancements to increase damage and contributed to the stagnant nature of the current meta. Therefore, we plan to make further improvements to the number of MolaGoras needed for enhancing skills. We will post a more detailed account of this improvement at a later date.

The additional MolaGoras will be returned to our players after the adjustments have been made. We hope that this will allow our players to develop Heroes with more ease and make the meta more dynamic.

Therefore, players will now be able to exchange 4 MolaGoras for 1 MolaGoraGo in the in-game shop. Huche will now instead sell Charms at a cheaper price.

The second obstacle in Hero development is the Catalysts. Outside of the exchange shop in side stories, Catalysts drops were rare and were often difficult to farm. Therefore, we plan to add a new system, the Regional Market, where players are guaranteed to obtain Catalysts.

Savara's Emporiums will expand into each region, and players will be able exchange “contributions” in each World Difficulty region for the regional Catalysts. Catalysts available for exchange will have a weekly limit. With this feature, players will be able to obtain the desired Catalysts with enough farming. We hope that this will help streamline Hero development for all Heirs!

This concludes the main talking points for this month.

In regards to the southern continent of Rotted Earth, mentioned previously in our side stories, we plan on introducing its new story journals and Episode 2 at a later date. When the time is right, we will visit you again with another developer's note!

There have also been some big changes around Super Creative. First, we are excited to announce that we have become part of the Smilegate family. We hope this helps us provide better service and the best gaming experience for all of our Heirs! There was also a celebration event in Taiwan where we got to meet around 100 Heirs to celebrate Epic Seven's 100 Days. We are hoping to meet our Heirs from South Korea who have been fans of our game for the longest time.

* GM Note: The images included in these dev notes are preliminary and subject to change.