*2/21 Edit: Unequipping Sword of Judgment does not consume Gold during So the Roses May Bloom. Please see section 4 for more details.

The knight who was expelled from the Rose Apostles and now works with the Phantom CIC investigating the Land of Death! 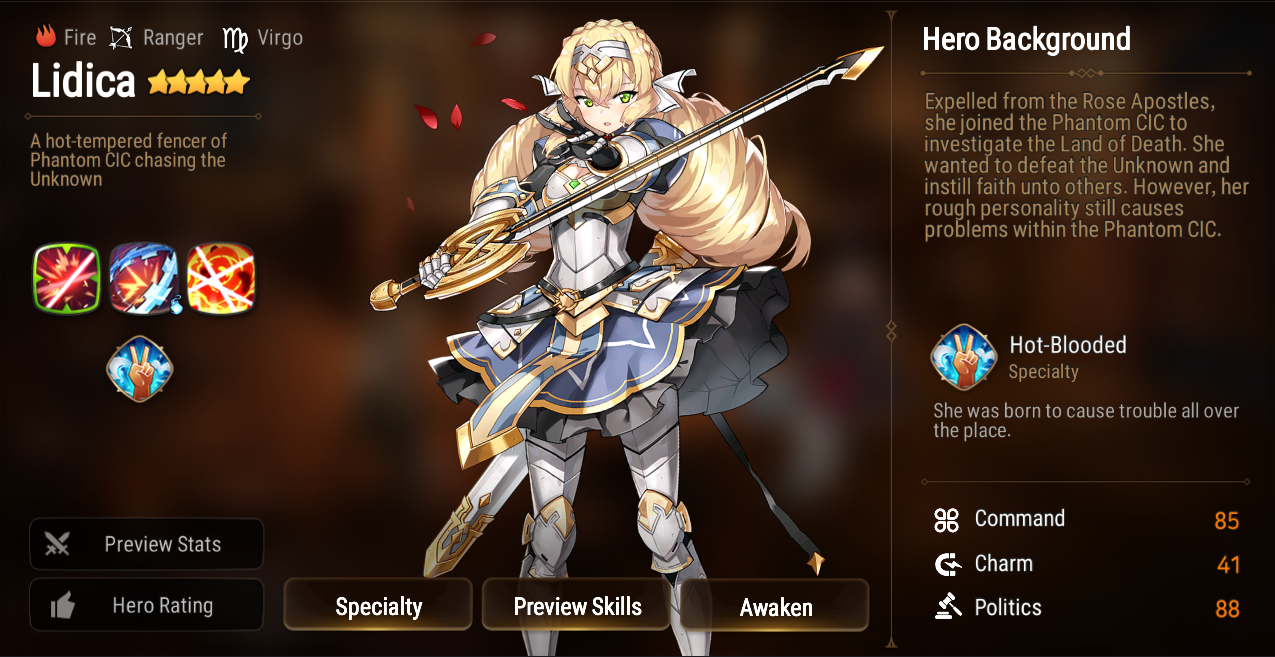 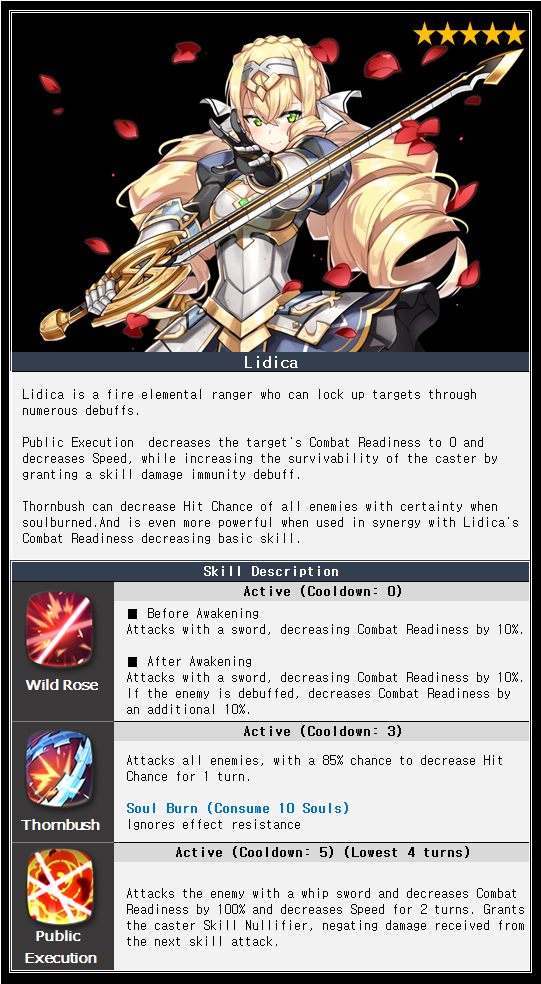 Sword of Judgment is a 5★ Star Ranger exclusive artifact that gives the wearer the chance to attack again with their basic skill if the target survived the initial attack. 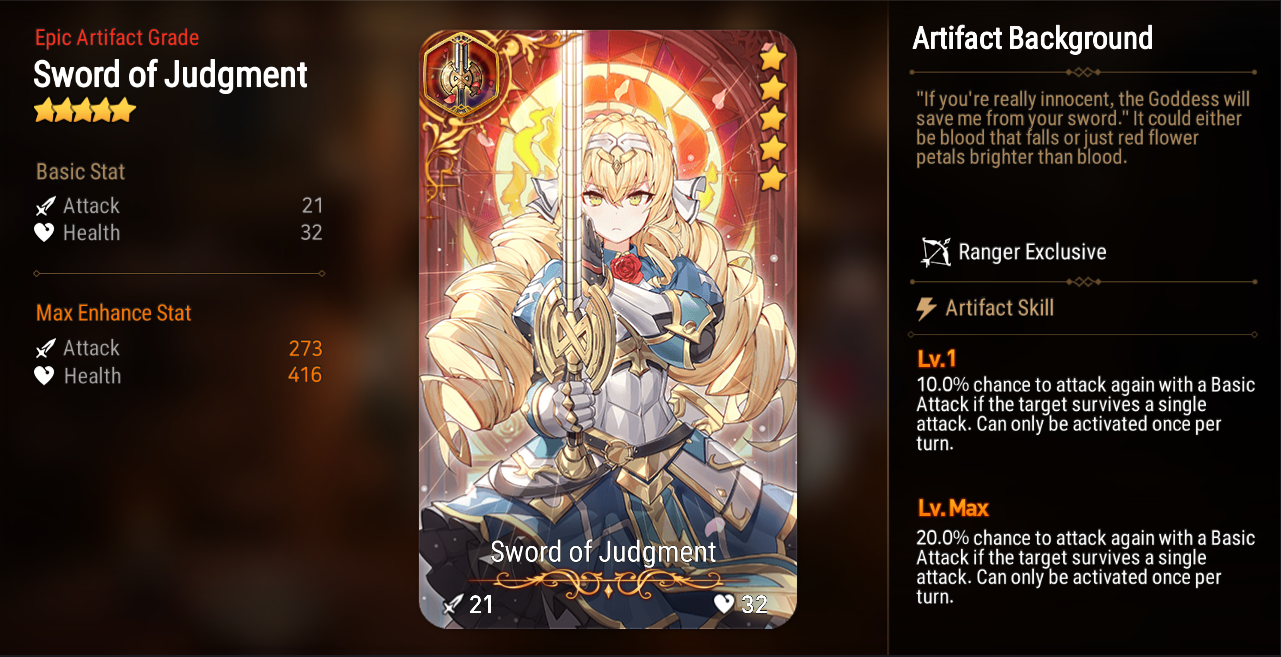 Lidica is a Ranger as well as a member of the Phantom CIC who can block the enemy’s attacks in multiple ways.

Sword of Judgment is an artifact that can allow the wearer to attack again with their Basic Attack.

Investigate the unknown with Lidica by your side and the Sword of Judgment in your hand in this Drop Rate Up event!

※ After the Drop Rate Up ends, both the 5★ Hero Lidica and the 5★ Artifact Sword of Judgment will be added to Covenant Summons and applicable Summon Tickets.

The chaos in Tirel Castle continues in week 2 of the special side story, “So the Roses May Bloom”.

Make your own sweet story with new Heroines in Epic Seven! 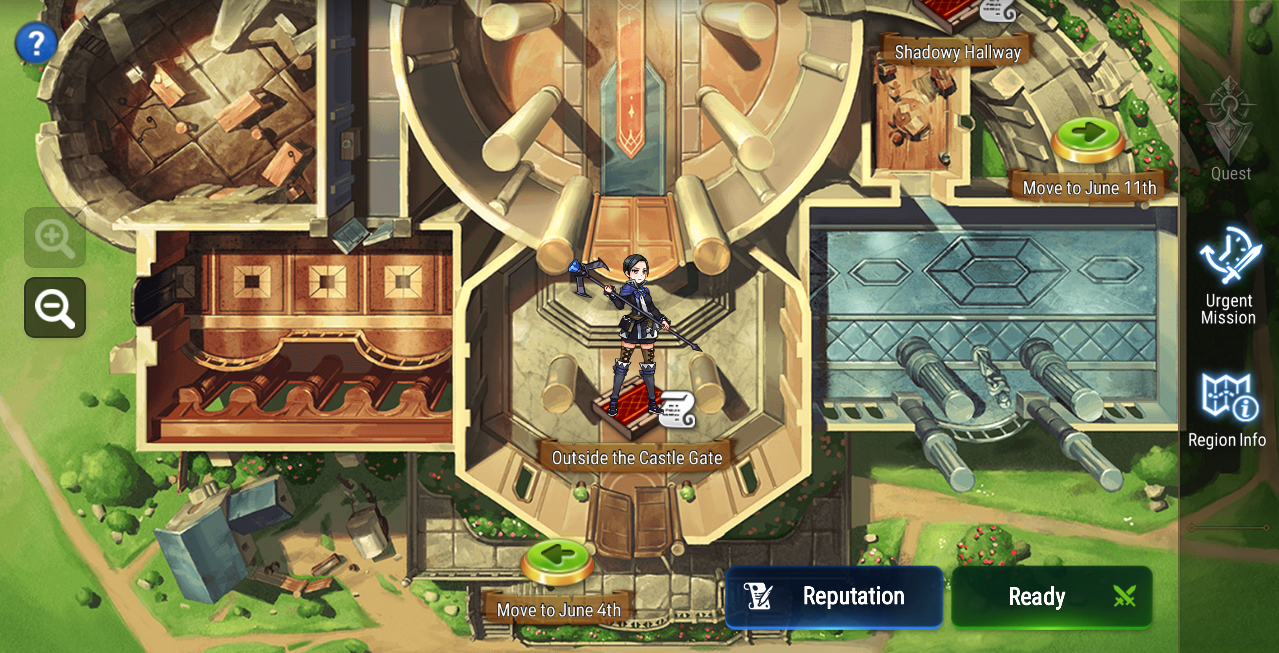 Story stages that have already been cleared can be replayed and new choices can be made.

Use the Map Movement (arrow) button or the World Map to access different days and try to get the bad, good, and special endings! 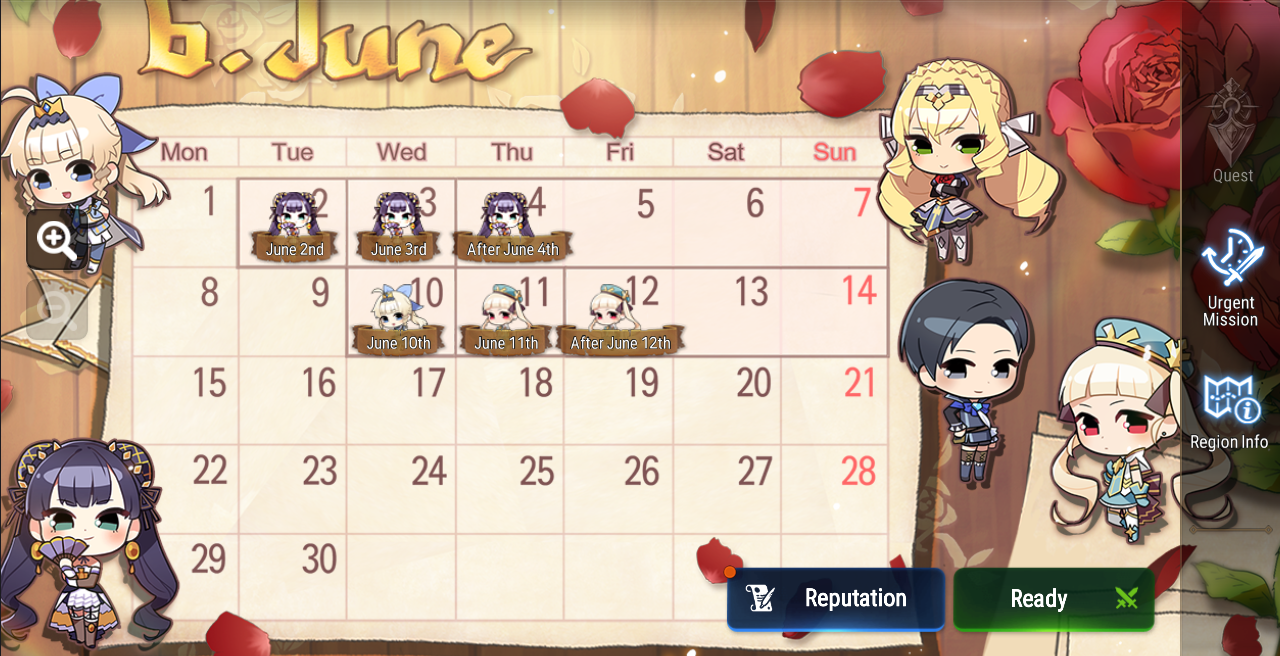 The new hero, Lidica, has now been added to the Enhanced Heroes section and will receive benefits when used in Battle Stages. 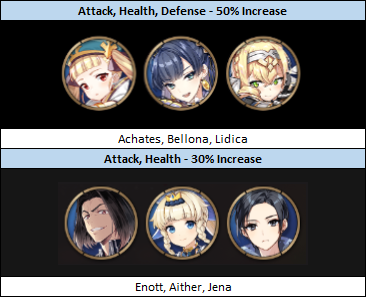 In the 2nd week, players can receive the event currency [Secret Letter] from the Battle Stage.
A variety of items can be purchased from Exchange by using event currency. 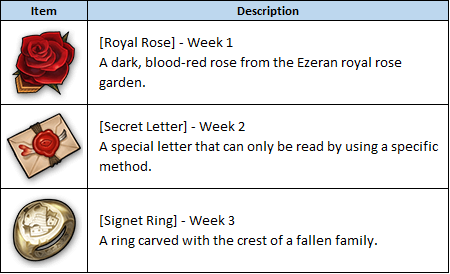 Hidden Achievements will appear upon reaching one of the endings (except the bad ending). 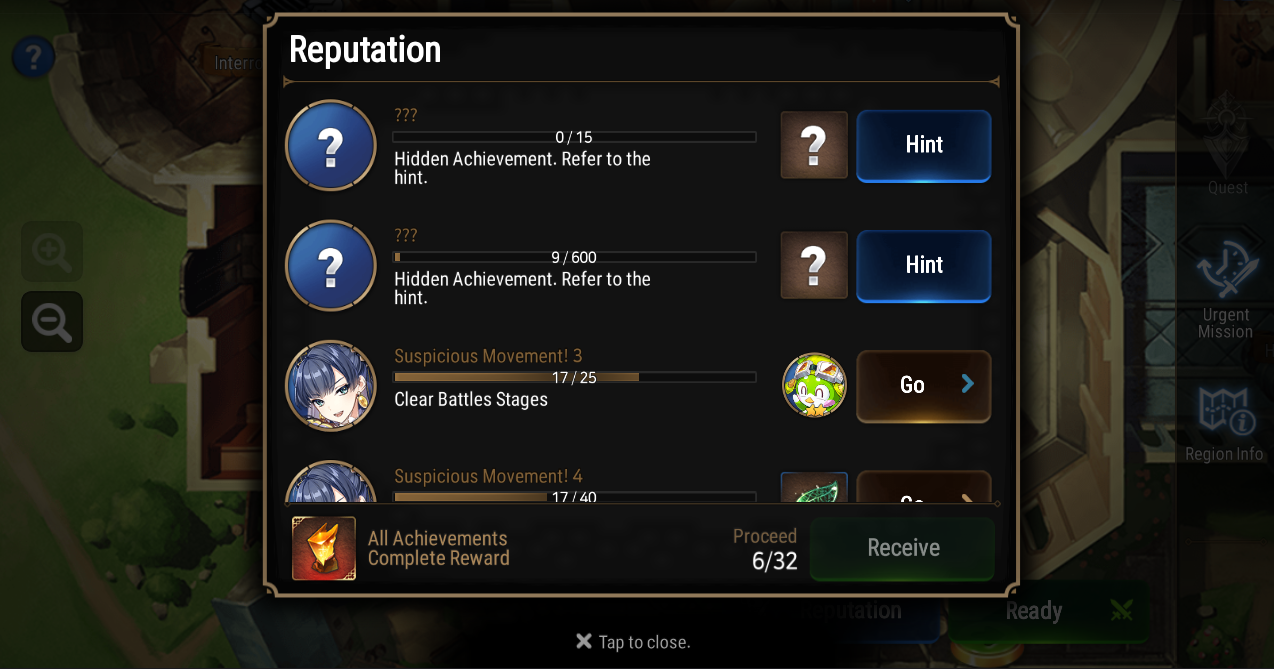 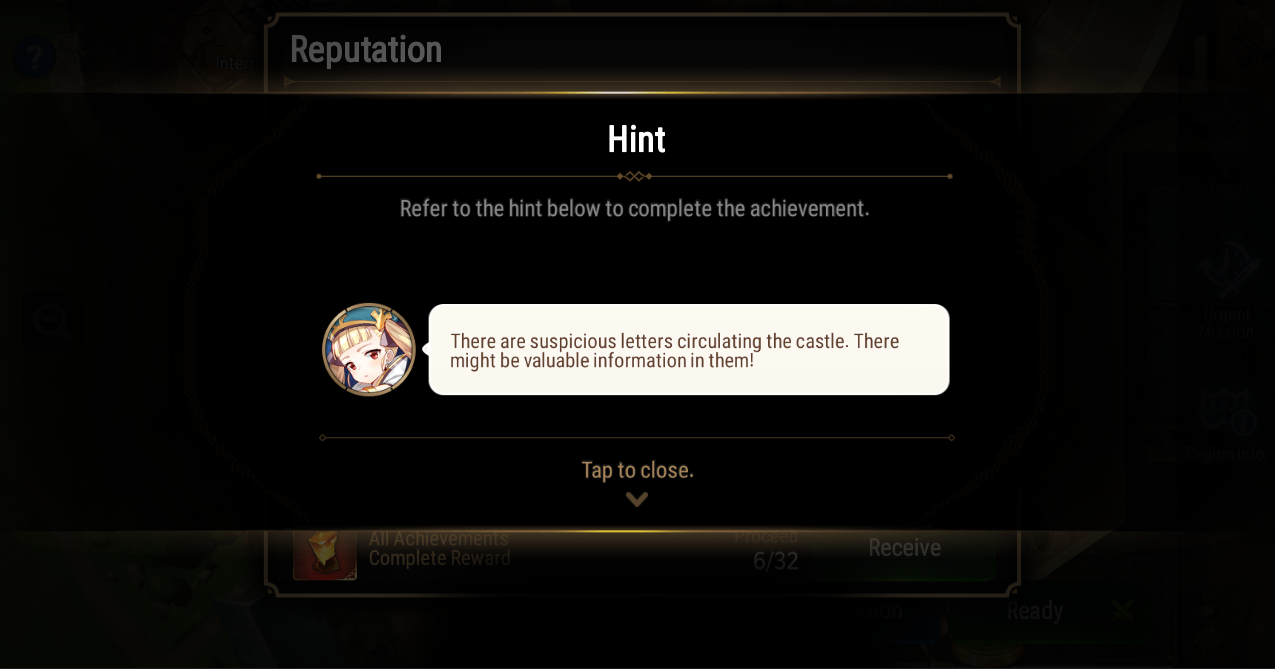 Complete the Hidden Achievements in order to receive your special reward. 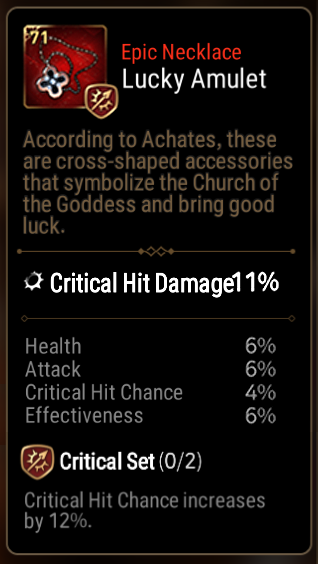 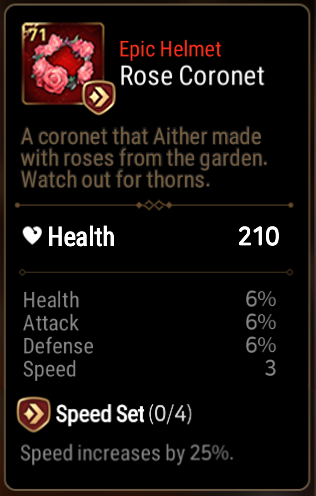 ※ The set, options, and stats are fixed when first acquired. Additional stats will be assigned randomly while enhancing.

Additional Event Currency [Secret Letter] will be rewarded according to the skill level of the new artifact, Sword of Judgment.

To check details about bonus currency, tap on the Bonus icon (plus signs) at the top of the stage entry window. 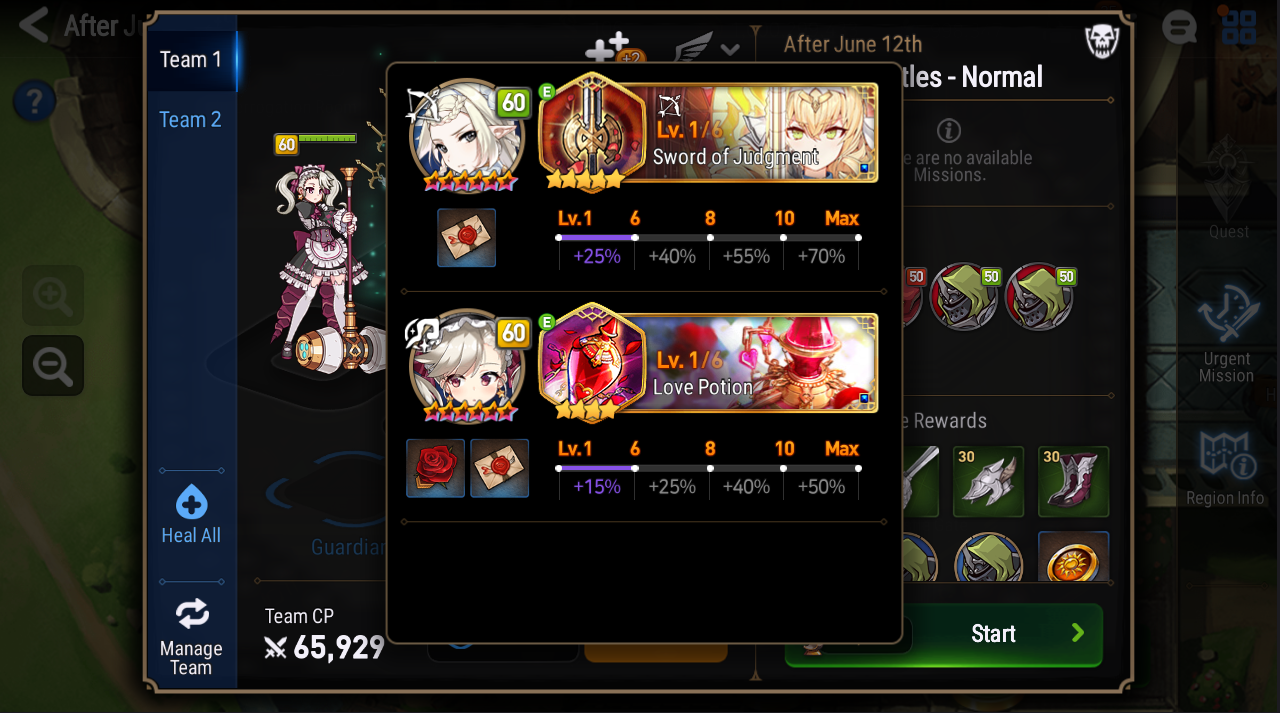 The chapter [Epilogue. Luxury Shopping District] has been added to June 3rd.

This stage can be entered by clearing Bellona’s Hidden Achievement, and this stage may be cleared only once during the event.

- 5★ Hero Tamarinne and 5★ Artifact Idol’s Cheer have been added to the Covenant Summon.

- The refresh time of the pool of Heroes & Artifacts that are available from Mystic Summons has been unified across all servers and will now occur at 18:00 UTC on Wednesdays.

- Information about Season 1’s end date has been removed from the Arena Story menu.

- A timer displaying the next shop list refresh has been added to the Powder of Knowledge Shop.

└ The shop list will refresh at 18:00 UTC on Wednesdays across all servers.

ㄴ Unknown Slate will return to the Conquest Points Shop when Season 2 begins. Players who purchased this item in Season 1 will be able to purchase it once again after it returns.

- When a new pack has been added to the Pack Shop or when the available items have refreshed, the Pack icon in the lobby now displays a notification (red dot).

- UI improvements have been made to categories in Shop, Battle, etc., and spacing of Shop items have been adjusted.

- An issue has been fixed in which, when battling against Devourer Arahakan with Tamarinne in the team, if Tamarinne used the skill "Shining Star" while the "unable to be buffed" debuff was applied, she would not transform into her idol form.

- The tooltip of Mascot Hazel’s skill “A Girl in Unform” has been made slightly clearer.

- When auto battle is active, Rose will now use her skill “Shield of Light” even if no allies have debuffs applied.

- The description of the buff “Stealth” has been updated.

- In the first battle of Banshee Hunt, Mistychain’s skill descriptions have been updated to correctly match their effects. There are no changes to the skills themselves.

- At the start of battle, the Combat Readiness variation that can be gained according to the speed stat of a character has been reduced from 10% to 5%.

- When not in a Guild and viewing the Guild screen, information displaying Activity Rewards has been viewed.

- In Guild War, the effect that displays when a building is destroyed now displays in the correct location.

- An issue has been fixed in which, errors would result when a player tried to leave the Guild at the exact moment they were promoted to Guild Leader.

- Guild War Matchmaking has been improved so as to provide opponents with more similar amounts of Victory Points.

- Achievements for Wyvern/Golem/Banshee stages 11 have been added to Phantom CIC’s achievements list under Reputation.

- In Exchange, the background screens no longer overlap when tapping the “back” button immediately after making a purchase.

- In Bellona's Hidden Achievement, an issue has been fixed in which the story that is meant to appear before the battle did not play.

└ Players who were unable to read this story previously can read it by checking the extra stage [Epilogue. Luxury Shopping District] on June 3rd.

- The readability of stage titles that display on the stage info screen has been improved.

- Players who have reset their account will no longer appear in the Members List of their previous guild.

- An issue has been fixed in which Heirs who are connected to an account that has been reset were unable to access social features.

- Improvements have been made to the tutorial that is played when you first enter the Raid Labyrinth Royal Capital Azmakalis.

- A description of the new enhancement effect "Skill Nullifier" has been added to the game guide.

- Text wrapping is now correctly implemented in the chat window.

- Tamarinne's pre-transformation portrait that appears in Camp and Side Stories is now animated.

- Improvements have been made to Azimanus Hunter’s Web Spray effect in Area 1 of the Raid Labyrinth Royal Capital Azmakalis.

- After Rune Combine, the total number of Runes you have will now automatically update.

- There is no longer text overlap between the stone icon and the enhance effects text on the Awaken screen of a Speciality Change Hero.

- When a Hero receives an effect in battle, the accompanying text effect will now follow the Hero.

- The issue that caused the game to freeze momentarily when entering a Side Story or Adventure after starting the game has been fixed.

- Improvements have been made to the Artifact skill level UI.

- An issue has been fixed in which, when the game's language is set to English, certain text was truncated or overflowed from boxes.