1. The new Hero Violet has arrived!

A narcissistic but incredibly skilled swordsman--

The son of a noble Perland family, meet the 5★ Hero, Violet! 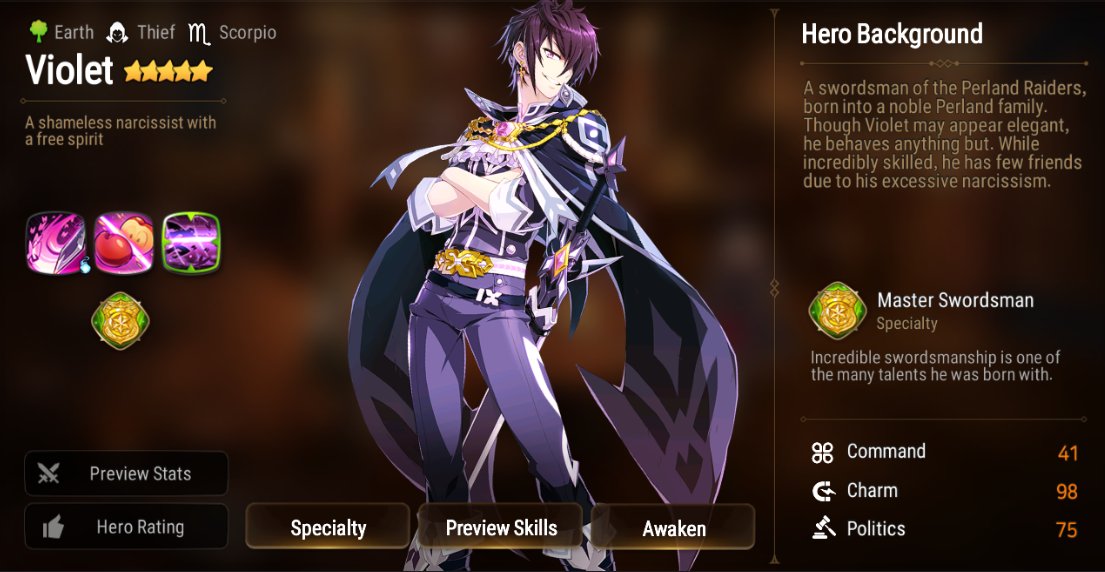 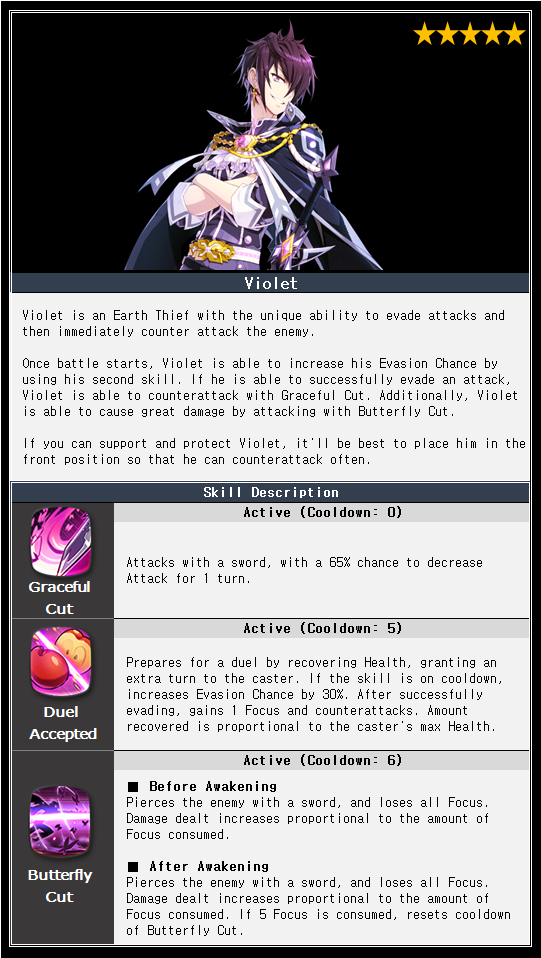 This Thief exclusive Artifact increases the attack and evasion chance at the start of each turn for the Hero who has equipped it. 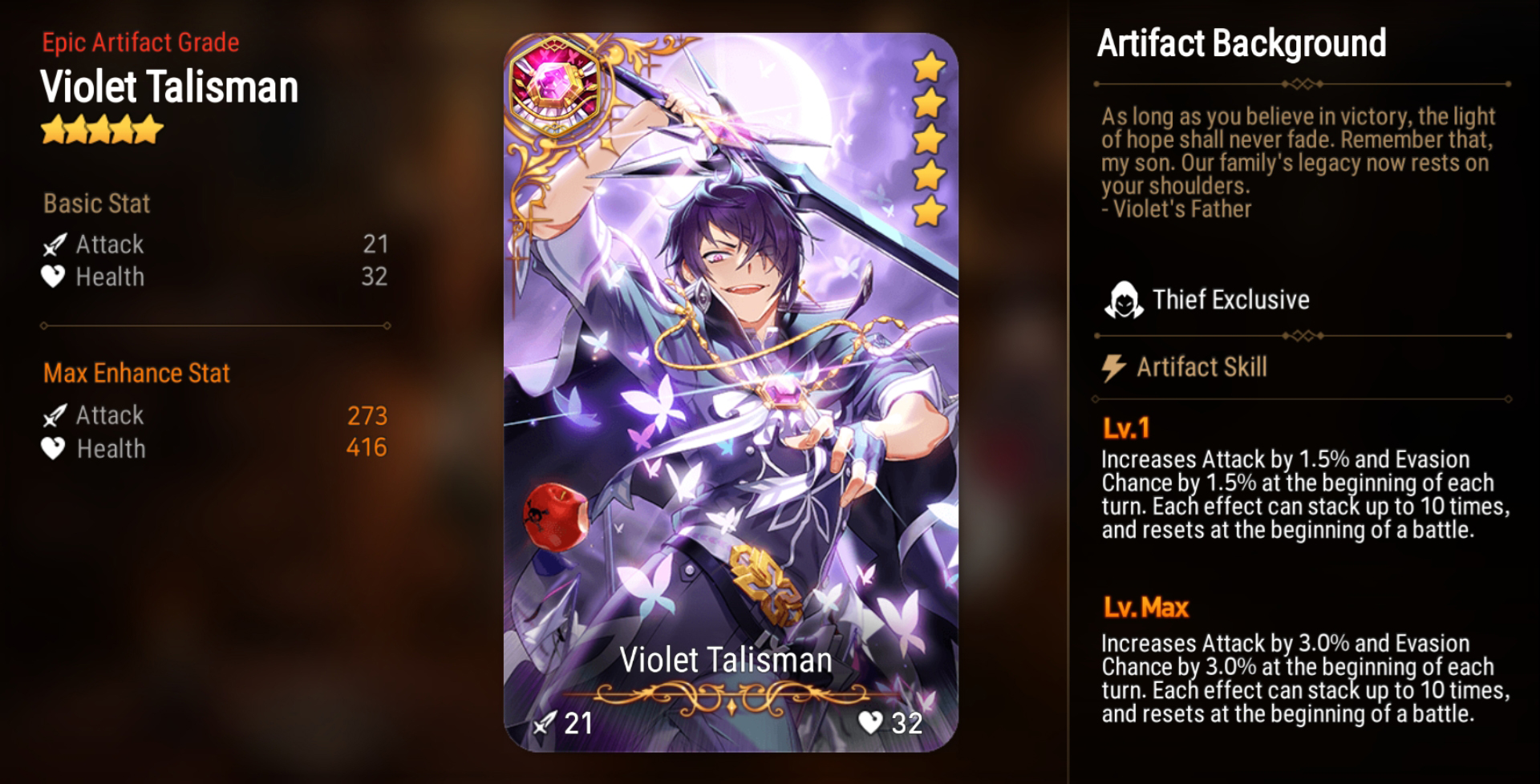 Violet is an Earth Thief whose damage dealt is proportional to the amount of Focus that is consumed, and when successfully evading an attack he is able to counterattack his opponents!
Violet Talisman is an artifact that grants the wearer increased attack and evasion chance at the start of every turn!

Meet the smooth-talking Violet and the powerful new artifact, Violet’s Talisman, during this Drop Rate Up event!

1/23 (Wed) after the update ~ 2/6 (Wed) 14:59 (UTC)
※ After the Drop Rate Up ends, both the 5★ Hero Violet and the 5★ Artifact Violet Talisman will be added to Covenant Summons and applicable Summon Tickets.

4. The Side Story Visitor From Perland is now open!

Violet emerges from a Chaos Gate only to find himself in Ritania - a place only known in tales and histories, where he receives some shocking information...

The man from Cidonia, the land of Rotted Earth. This is Violet’s tale.

Play through the Side Story stages to collect the event currency “Indecipherable Journals” and exchange them for great rewards! Additional rewards can be collected from Region Rewards, Quests, and Reputation. 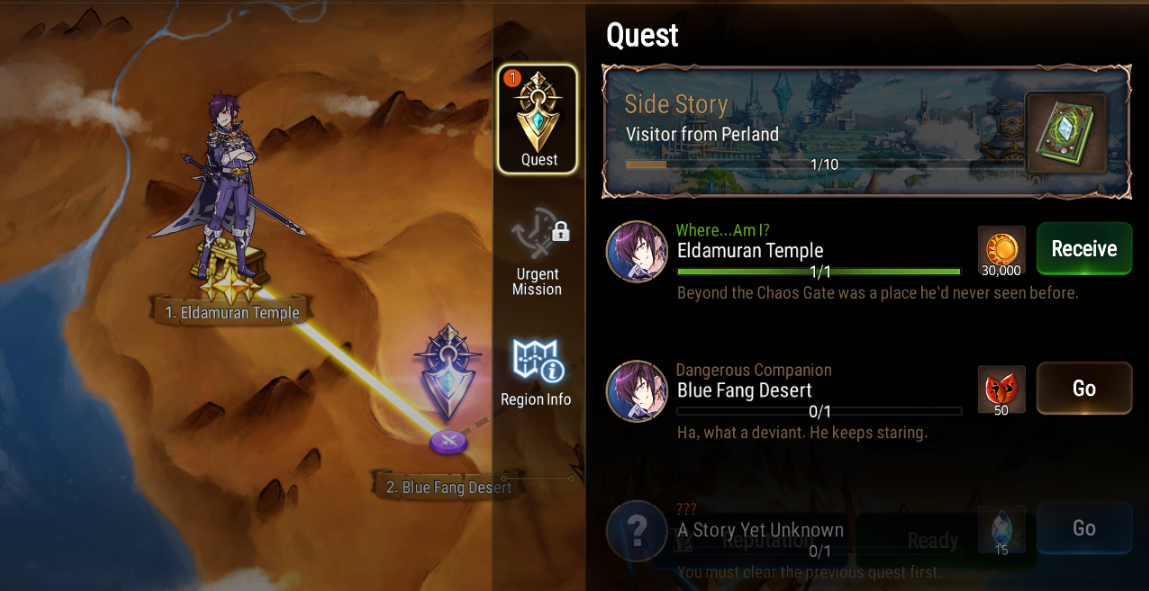 1) Violet and the following Heroes receive benefits when used in Visitor From Perland:

3) In the Side Story region, players can acquire 2★ Monsters and Catalysts. Players can see this information by tapping the Region Info icon.
4) Once players clear the stage [Eastern Outskirts of Tirel Castle] they will be able to select higher difficulty stages.

■ Locked Quests
The side story [Visitor From Perland] consists of two areas, Savara to Ezera. In order to move from Savara to Ezera, players must clear the locked quests. 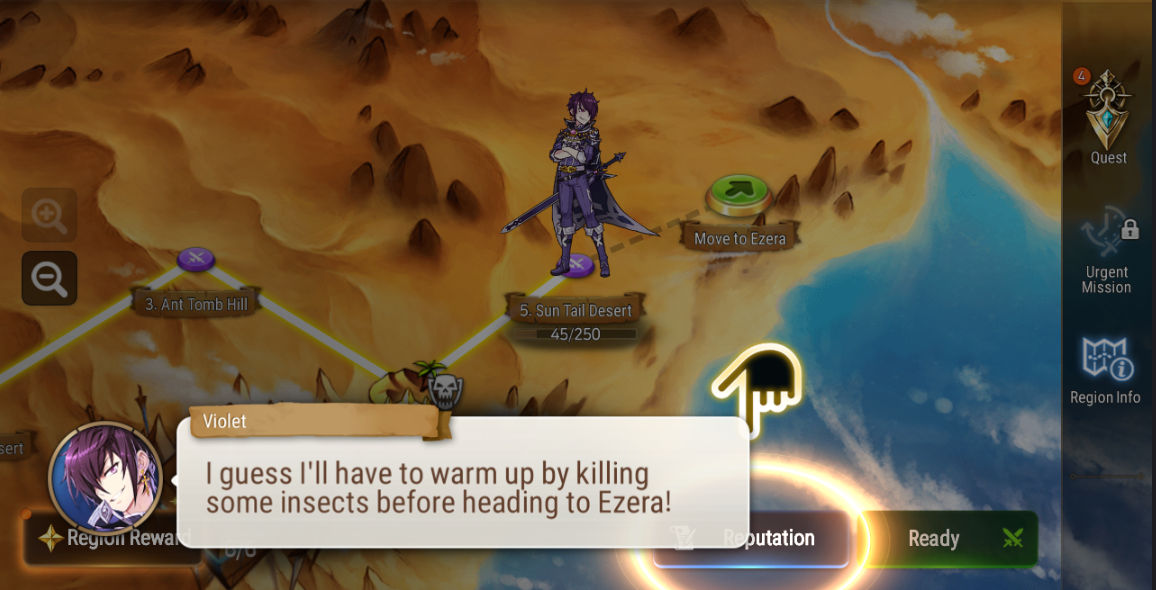 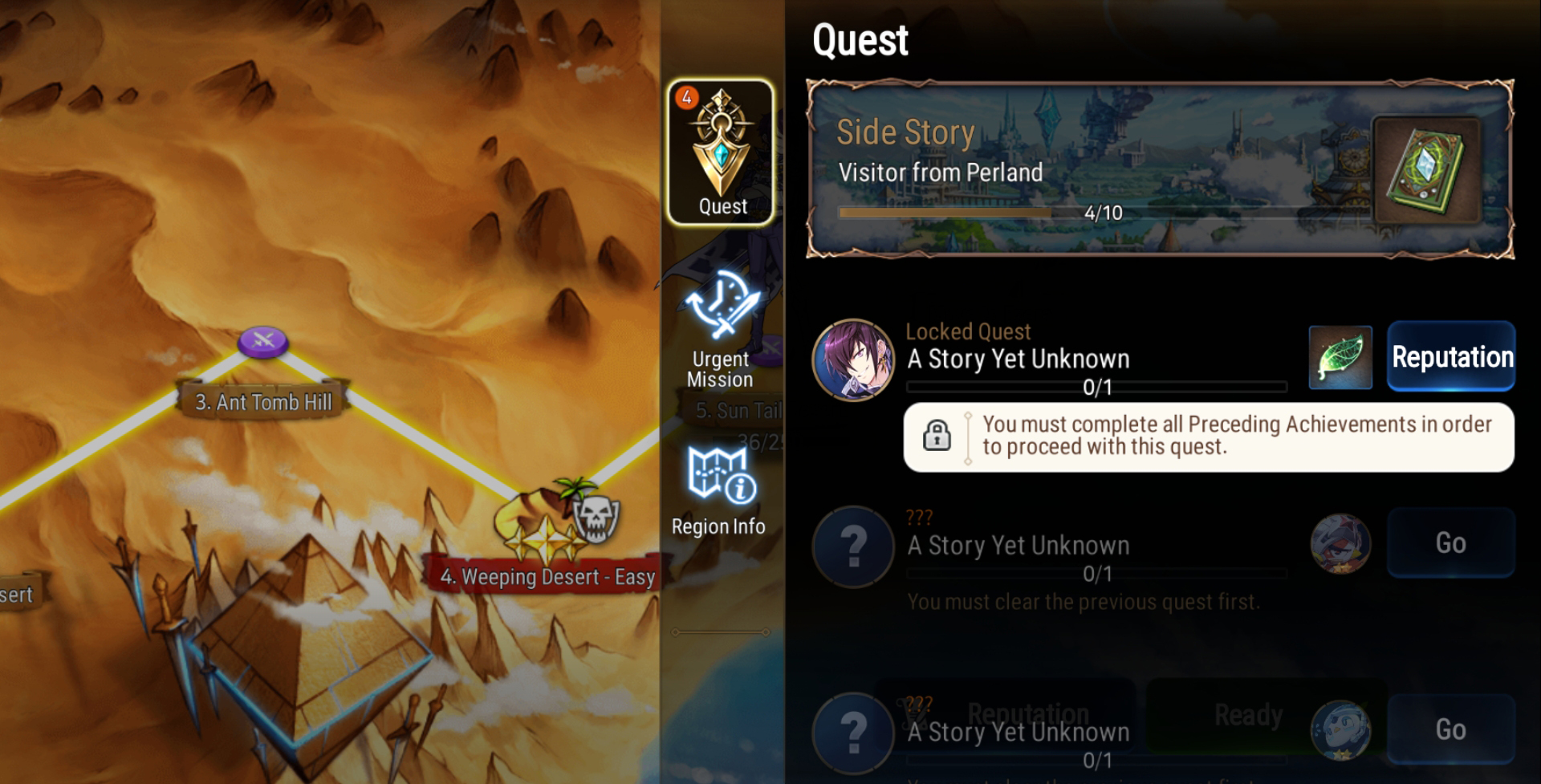 ■ Side Story Improvements: Multiple Difficulty Levels
In previous versions of Side Story mode, players were able to play World difficulty after having cleared the side story on Normal. Now there will be four different difficulty levels players can select from. These levels start from Easy and then go to Normal, Hard, and Hell mode. The highest difficulty, Hell, will reward the player with up to five times the amount of event currency.

Additionally, in order to increase character progression, the rewards that can be exchanged for the event currency include 3 star penguins, as well as an increase in epic and rare catalysts that can be purchased.

Stages [4. Weeping Desert] and [10. Eastern Outskirts of Tirel Castle] allow players to select their difficulty level. Players may only select a higher difficulty level if they successfully cleared the one before it. Remember, the higher the difficulty level, the stronger the enemies, but the better the rewards! 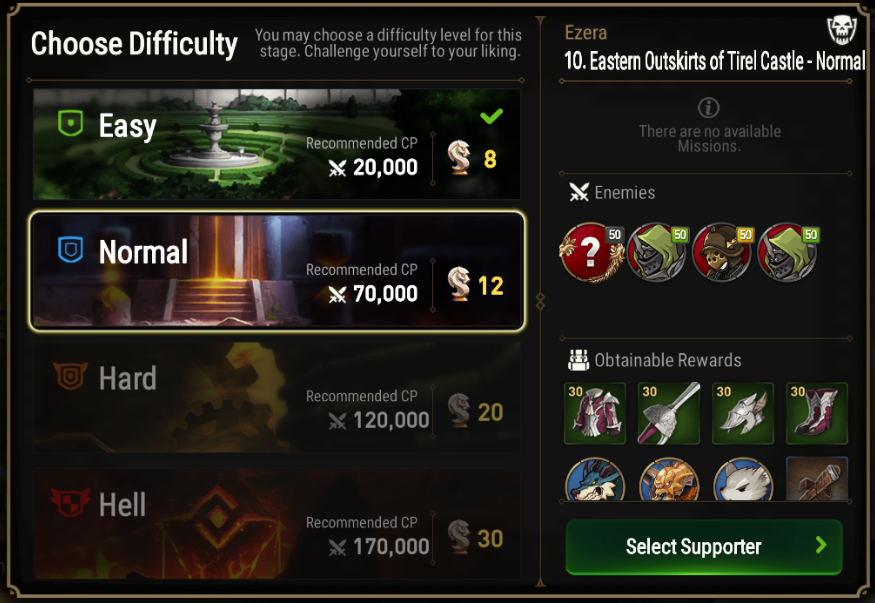 Area 4 of Royal Capital Azmakalis (Hell) has been unlocked.

The ancient Azimanus lord Executioner Karkanis has become even more powerful—he must be stopped! 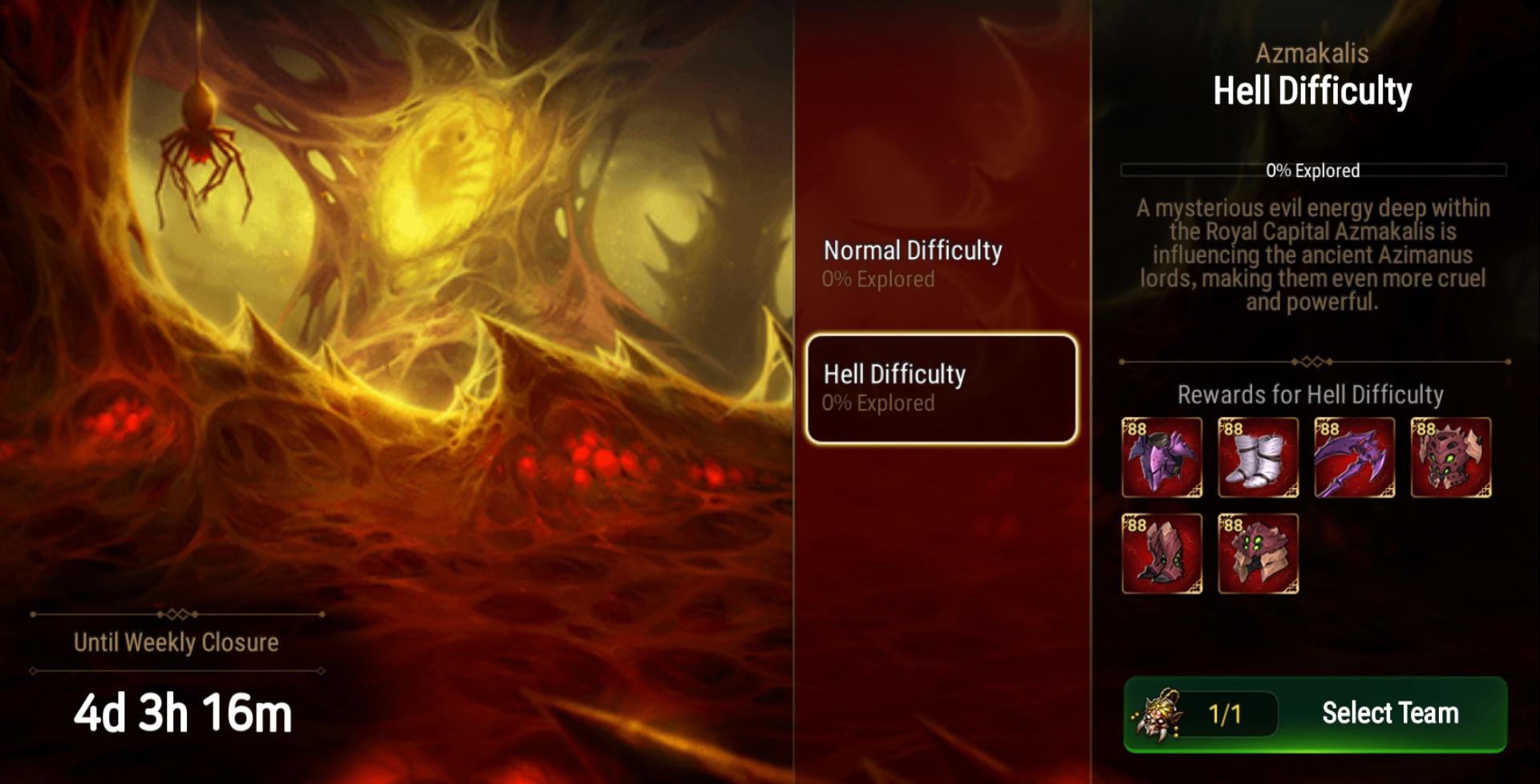 ※ Malicious Bug Charms can be obtained by defeating Queen Azumashik in Normal difficulty or by purchasing them in the Ancient Coin Shop in the Lobby.

2) Entry Restrictions: In order to ensure stability during the reset, players will not be able to enter for 5 hours prior to the reset on Sundays.

- If the reset begins after entrance but the player clears the Labyrinth before Sunday at 13:00 UTC, they will be able to obtain the reward as normal.

- If the reset begins after entrance and the player does not clear the Labyrinth by Sunday at 13:00 UTC, they will be forced to exit the Labyrinth, will not receive a reward, and will have the currency used to enter refunded to them.

Executioner Karkanis can now be found in Area 4 of the Raid Labyrinth “Royal Capital Azmakalis (Hell)”.

Aside from Areas 1 and 4, other Areas are still unavailable for exploration and will be opened at a later date.

Normal/Elite/Boss Monsters will appear and will not respawn until the weekly Labyrinth reset. 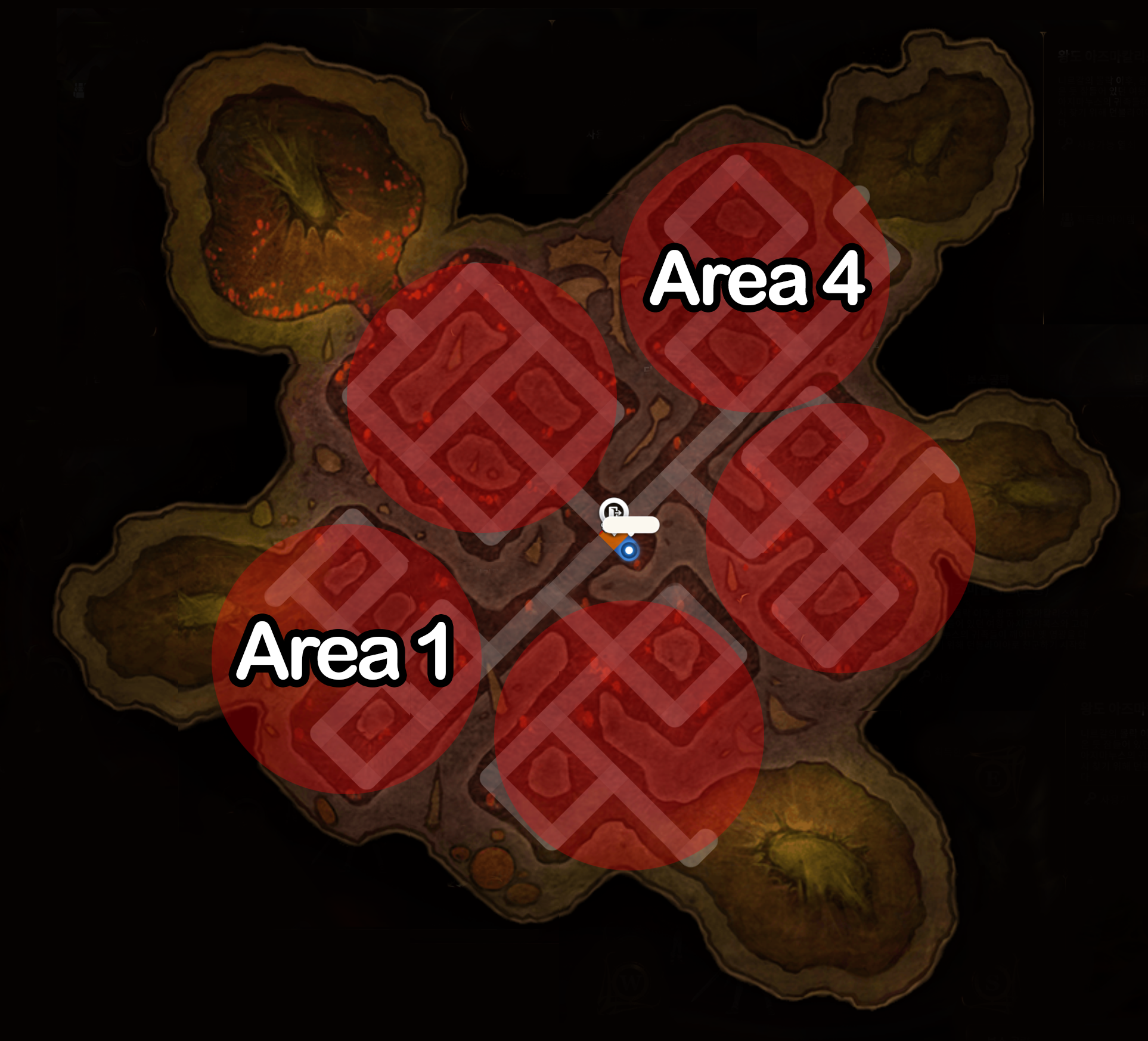 Greater Champion’s Equipment and Azimanus Fighter's Ring can be obtained.

- There is a chance for Greater Lost Warrior’s Equipment to drop after defeating Normal/Elite/Boss Monsters in Areas 1 and 4.

- Main and sub options are assigned randomly upon acquisition.

- There is a low chance for Greater Azimanus Fighter’s Ring to drop after defeating Normal/Elite Monsters in Areas 1 and 4.

- Main and sub options are assigned randomly upon acquisition.

- Collect “Queen’s Guard Badge” dropped by Boss Monsters in Hell Difficulty and exchange them for various items by speaking with Alexa, the Logistics Officer.

- The Logistics Officer will be encountered 100% of the time at her designated location in the Labyrinth.

- The limit on the number of purchases for each item resets every day at server reset. 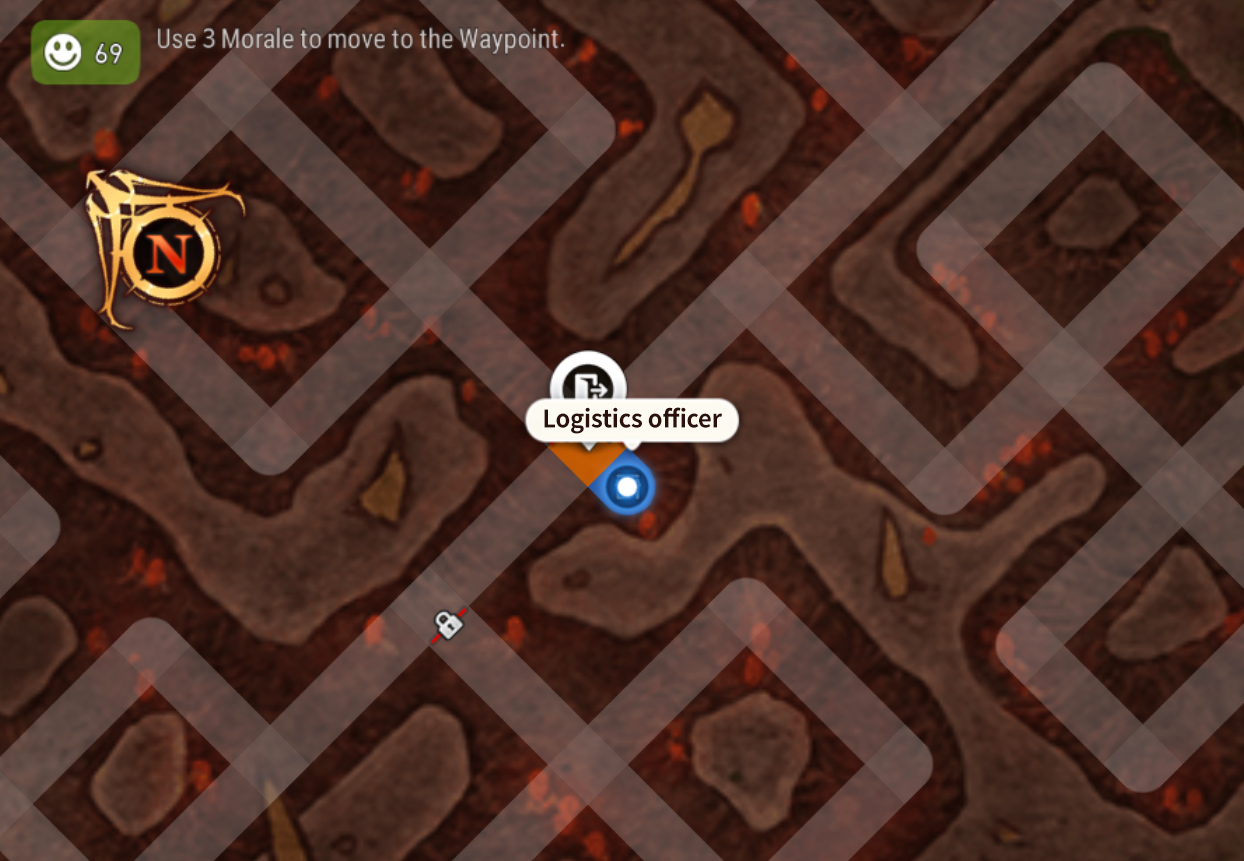 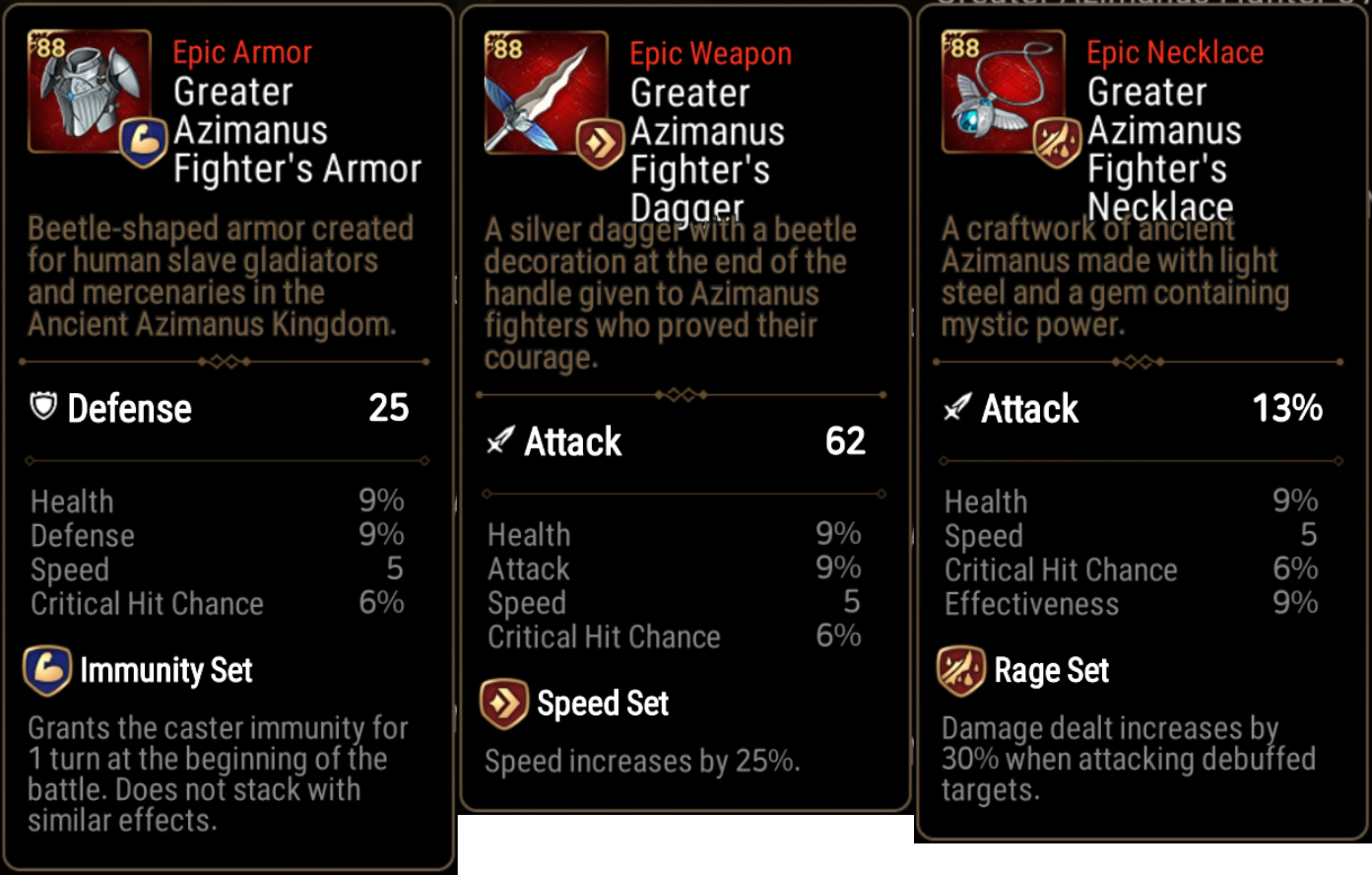 - 5★ Hero Bellona and 5★ Artifact Iron Fan have been added to the Covenant Summon.

- Skill Preview for Summon Rate UP Heroes is now available.

- Ken’s Vigor Buff can no longer be taken away by the enemy.

- An issue has been fixed in which Tywin and Auxiliary Lots’s buff skills did not properly apply to certain Heroes.

- When Bellona’s skill “Windbreak Fan” defeats the last enemy with a total of 5 focus, the focus no longer is lost.

- An issue has been fixed in which, in certain situations, Heroes were able to be placed on the team more than once.

- Improvements have been made to the Artifact tab of the Inventory to make viewing more comfortable when selecting Artifacts to sell.

- Infinity Basket’s attack stats have been improved to match those of other Artifacts.

- Weekly guild contribution now increases according to the amount of Guild Crests received through Gold donations rather than according to Gold donated.

- Players who have been promoted to Guild Captain and attempt to leave the Guild will now receive a notification stating that they cannot leave the Guild.

- An issue has been fixed in which, in Zone 3 of the Great Farche Labyrinth, Burning Eye Lich did not revive in certain conditions.

- The Boss effect resistance tooltip for Wyvern no longer displays ‘Decrease Speed’ immunity when after its barrier expires.

- The description for Silva and Klineode’s skill “Will of Nature” in Golem Hunt has been updated to match the actual effects. There is no change to the skill itself.

└ Before: Immune to Provoke and Silence debuffs

└ After: Immune to Provoke, Silence, and decrease Speed debuffs.

- The description for Zeno’s skill “Transcendent Power” in Arrogant Zeno (Epic Hell difficulty) has been updated to match the actual effects. There is no change to the skill itself.

└ Before: Caster does not suffer critical hits if buffed, and counterattacks when attacked if granted three or more buffs.

└ After: Greatly decreases damage suffered from a critical hit if the caster is buffed. Counterattacks when attacked if the caster has three or more buffs.

- The amount of Energy received from Leifs has been increased from 70 to 80.

- The [Package] category of the Shop is now be located under the [Skystone] category.

- The mini-map no longer displays in Skill Preview.

- Morfid now has an animated portrait.

- Church of Ilryos Axe’s Hero stars no longer spill outside the UI in the Hero Specialty Change menu.

- Players will no longer receive STOVE errors on certain devices and are now able to enter the in-game Lobby.

- Equipment descriptions once again display when enhancing Equipment via the Hero menu.