1. The new Hero Bellona has arrived!

The noblewoman of Ezera who left to find freedom!

Bellona is an Earth Archer whose damage output increases when there are more enemies. Iron Fan is an Archer exclusive artifact which increases damage against Ice elemental enemies. Meet the noblewoman Bellona and obtain this new artifact in our newest Rate Up event!

Bellona has been spending painful days under the pressure of a stepmother who dislikes her and her sense of duty to her family. One day, an intruder brings change to her life…

Find out more in Bellona’s Side Story, Two Keys to Freedom

■ How to Participate
Play through the Side Story stages to collect the event currency “Lost Accessory,” and exchange them for great rewards! Additional rewards can be collected from Region Rewards, Quests, and Reputation.

1) Bellona and the following Heroes receive benefits when used in Two Keys to Freedom: 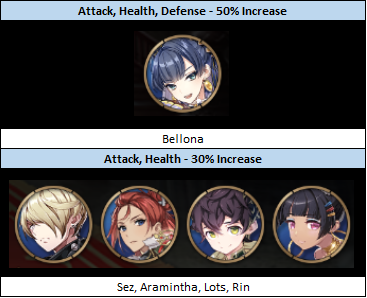 2) Once players clear all the stages on Normal difficulty, they may play on World difficulty.
3) Players can also receive Urgent Missions while playing a Side Story.

4) In the Side Story region, players can acquire 2★ Monsters and Catalysts. Players can see this information by tapping the Region Info icon.

5) In Normal difficulty, certain stages can only be unlocked after completing certain quests.

When selling Artifacts of 3★ or higher, players will now obtain the new resource ‘Powder of Knowledge,’ which can be exchanged in the Shop for the new 5★ Limit Breaker ‘Bottle of Knowledge’ and a variety of other Artifacts.

Players can now obtain a new resource called ‘Powder of Knowledge’ when Selling Artifacts that are 3★ or higher.

Artifacts obtained from Side Stories and Challenges as well as Charms will not issue Powder of Knowledge when sold. 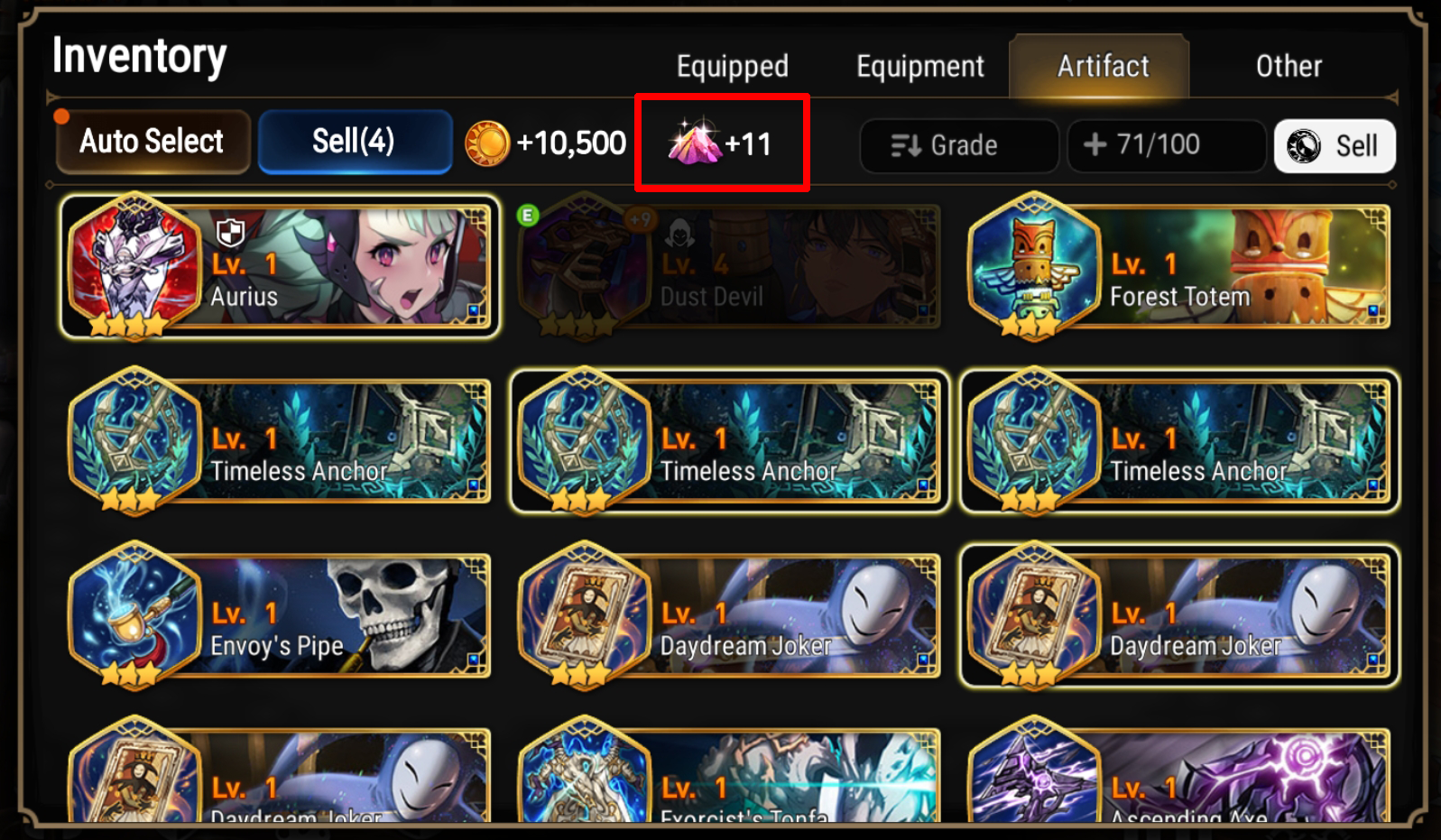 3★ or higher Artifacts issue Gold and Powder of Knowledge when sold.

Artifacts that have been Limit Broken will receive higher amounts of Gold and Powder of Knowledge according to how many times they were Limit Broken.

[Artifacts that do not Provide Powder of Knowledge]

Artifacts that have been obtained via Events and Challenges will not provide Powder of Knowledge when sold.

A new section of the Shop has opened for players to spend their Powder of Knowledge. 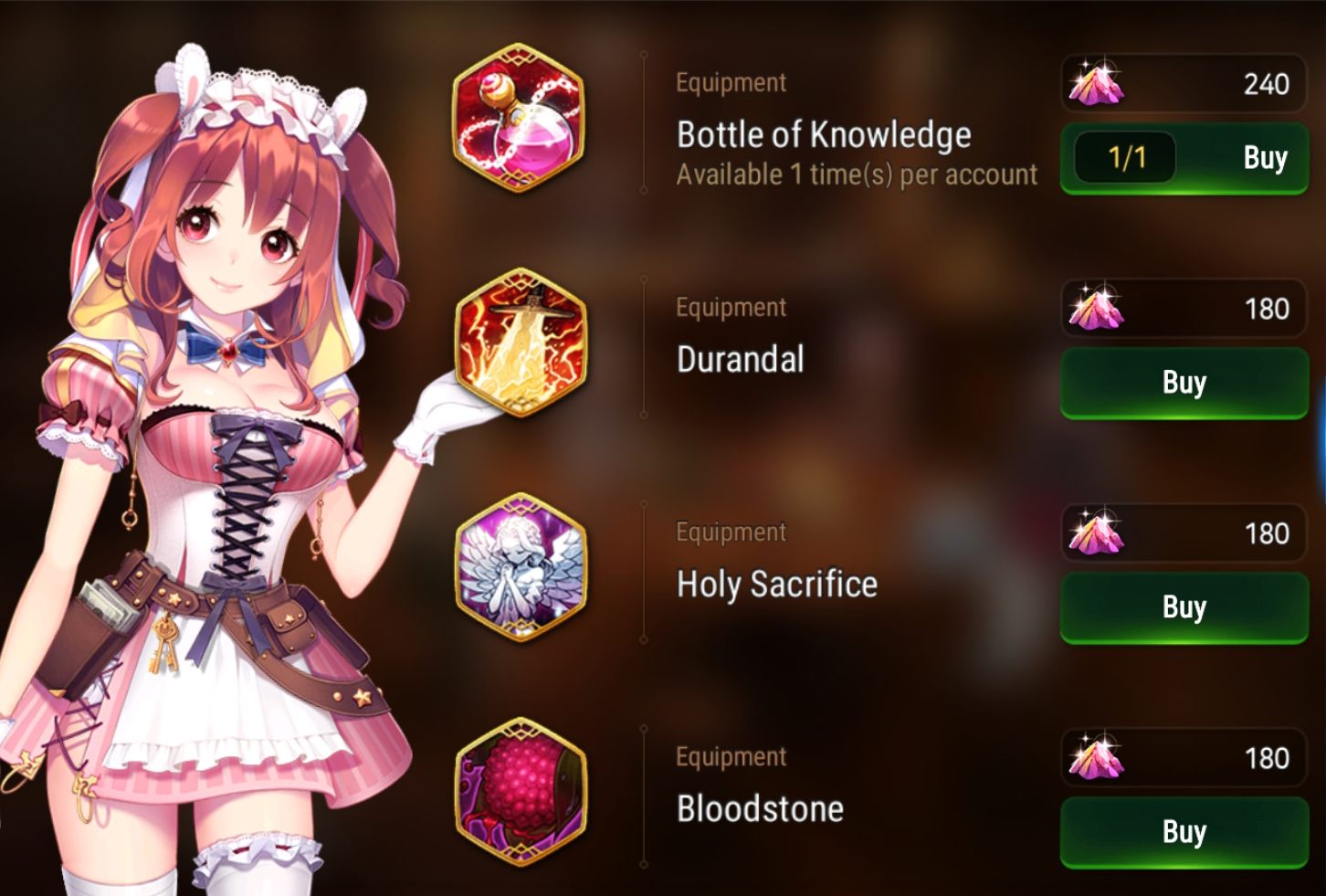 The Powder of Knowledge Shop’s exclusive item ‘Bottle of Knowledge’ as well as different 4-5★ Artifacts can be purchased here. The available items will change every four weeks.

※ These items will change after the update on 2/6 (Wed).

A new item for Limit Breaking 5★ Artifacts has been added.

When using this item to enhance a 5★ Artifact, the Artifact’s max level will increase. 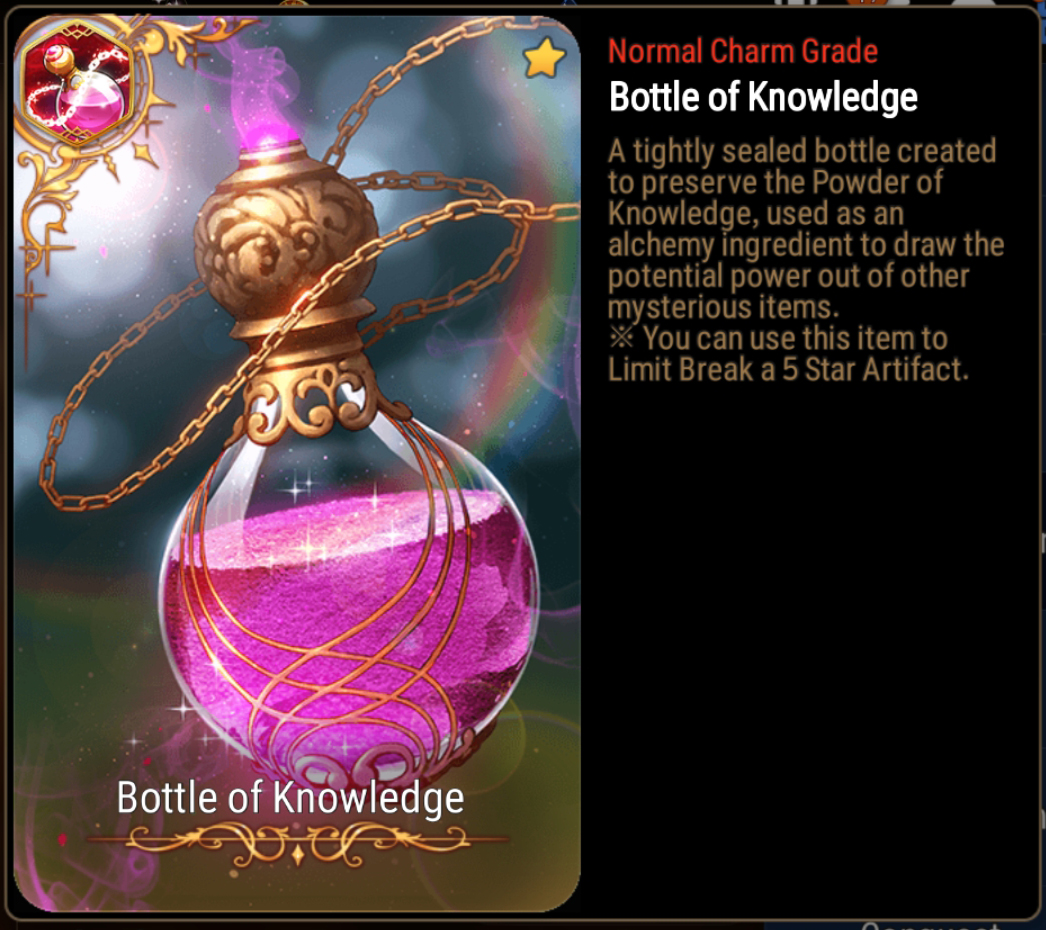 When using Artifacts that have already been Limit Broken to enhance another copy of the same Artifact, the Limit Breaks of the fodder Artifact will also be applied to the Artifact being enhanced.

Item drop rates have been improved, and better rewards are now obtainable in the Raid Labyrinth [Royal Capital Azmakalis].

The drop rates of items in Royal Capital Azmakalis have been improved.

- The drop rate of each Boss’s exclusive Epic Equipment has been increased by 20%.

✓ Instead of the original Labyrinth Equipment, players now have a chance to receive 1 [Coronation Souvenir].

- When defeating a Monster either difficulty, all items will now display as [Sap-Covered Item] except for Ancient Coins, Gold, and Raid Labyrinth-exclusive resources.

✓ The item contained in the [Sap-Covered Item] will be revealed upon viewing the results screen after leaving through the Portal. 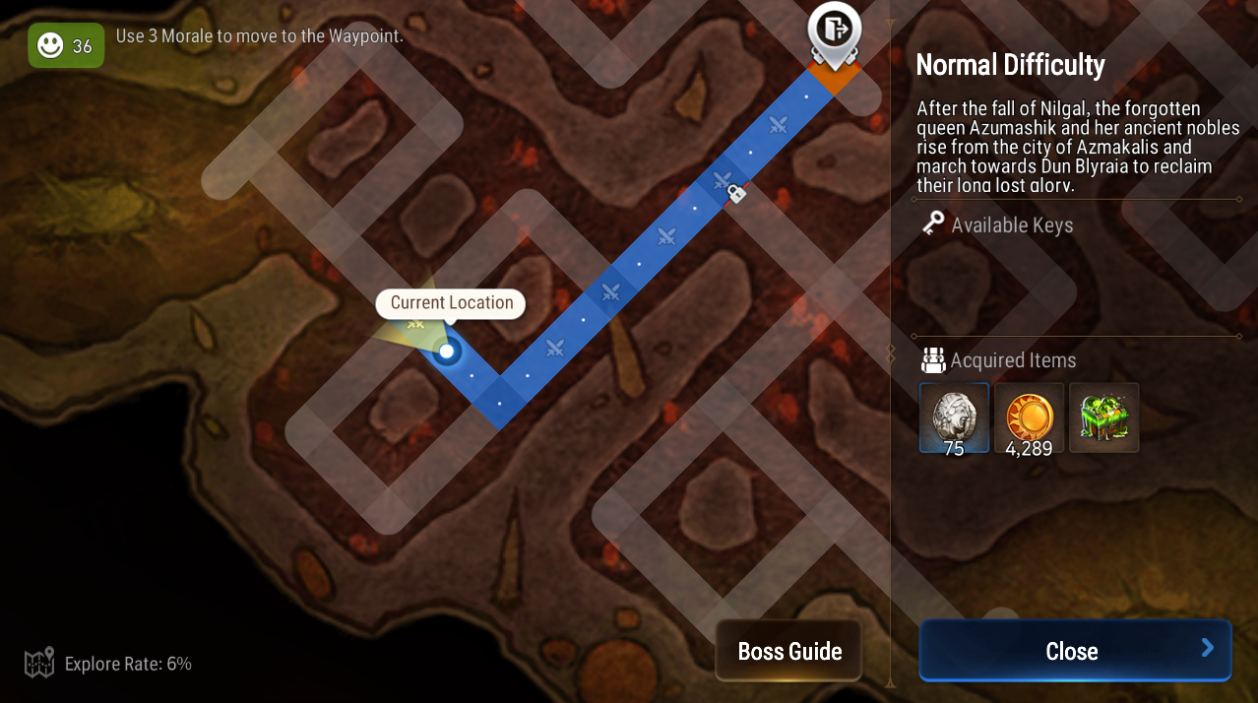 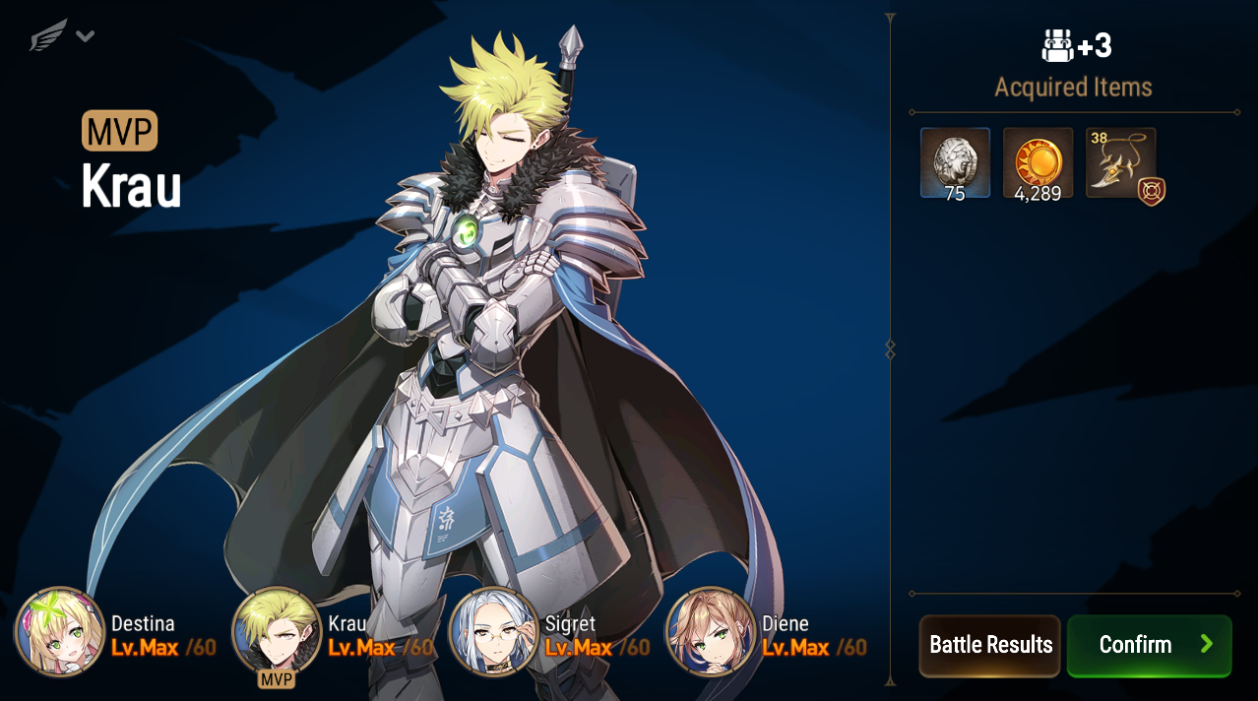 - When Enhancing the equipment after acquiring, additional stats will be assigned randomly. 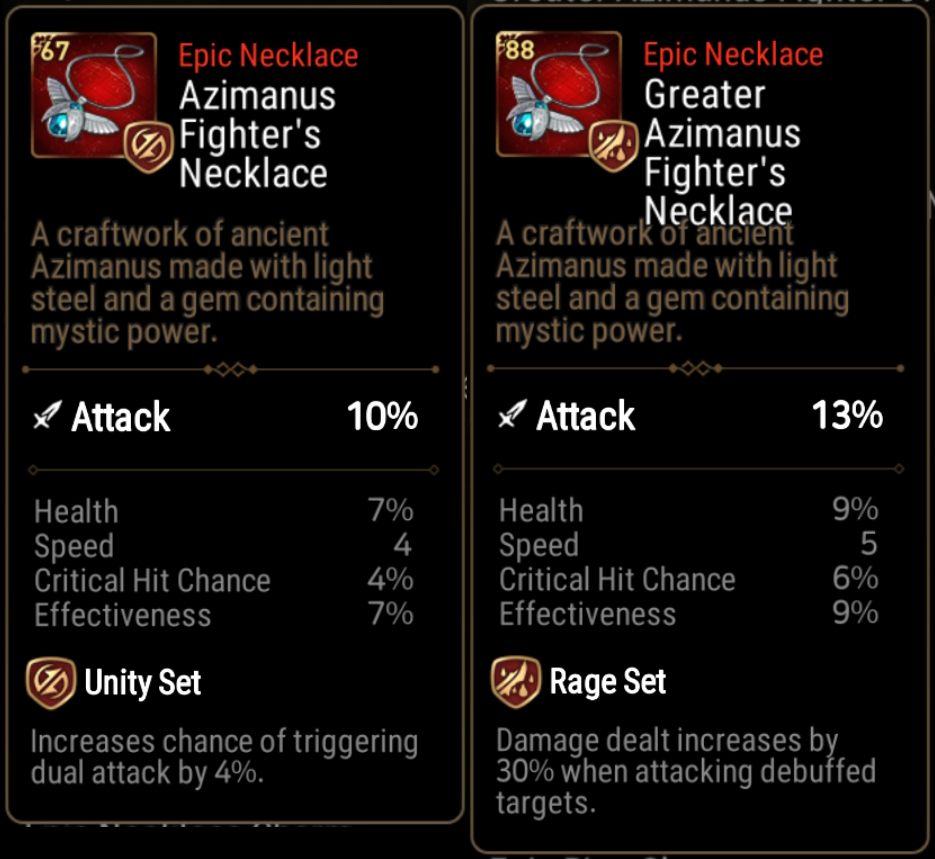 - The Health of Azimanus Hunters that appear before the Boss in the first area has been reduced by 20%.

- The skill description of Azimanus Scout’s skill ‘Corrupted Web’ has been updated to correctly match the skill.

- Azimanus Scout’s skill name has been updated from Mass Enhance to Group Heal in order to accurately reflect the skill.

- The skill description of Area 1 Boss Devourer Arahakan’s skill ‘Crisis Response’ has been updated to correctly match the skill.

- When the Area 4 Boss Executioner Karkanis’s skill ‘Crush’ activates, the target’s current Health is reduced by 99% only when target's Health is below 50%.

- The effects of the Area 5 Boss Queen Azumashik’s skill ‘Queen’s Terror’ no longer persist after defeating her.

- In order to help guide newcomers, players may now access only Area 1 of Royal Capital Azmakalis the first time they enter (normal mode).

✓ Other Areas are unlocked immediately upon defeating the Area 1 Boss Devourer Arahakan. 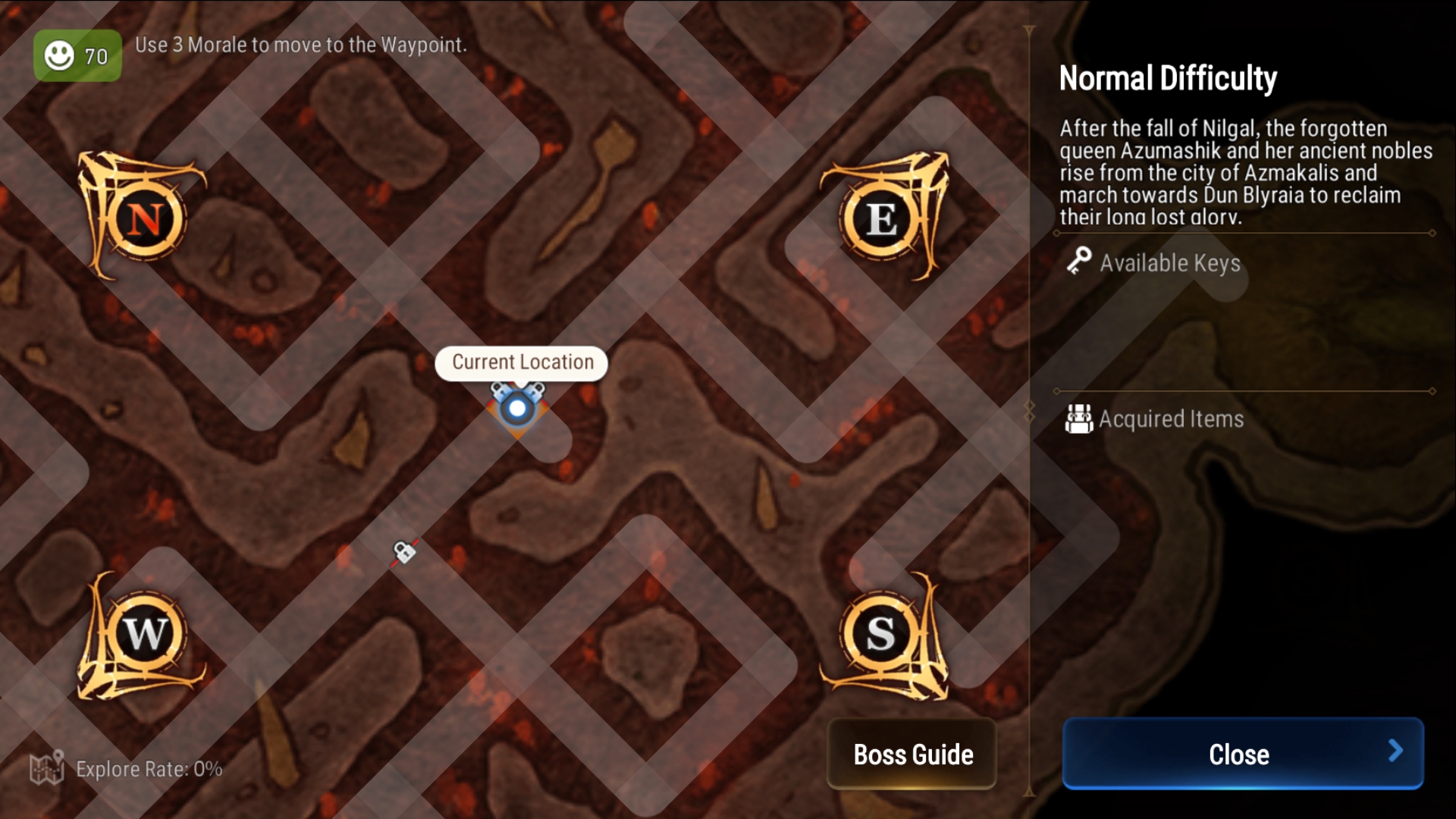 - An issue has been fixed in which, after defeating Queen Azumashik, selecting Retry, and clearing the Labyrinth resulted in the achievement ‘Fall of the spider queen’ not being marked as completed.

A new feature has been added allowing players to view their favorite Heroes in closer detail.

By using the close-up feature, players will be able to admire the full-body art of Heroes in portrait mode. 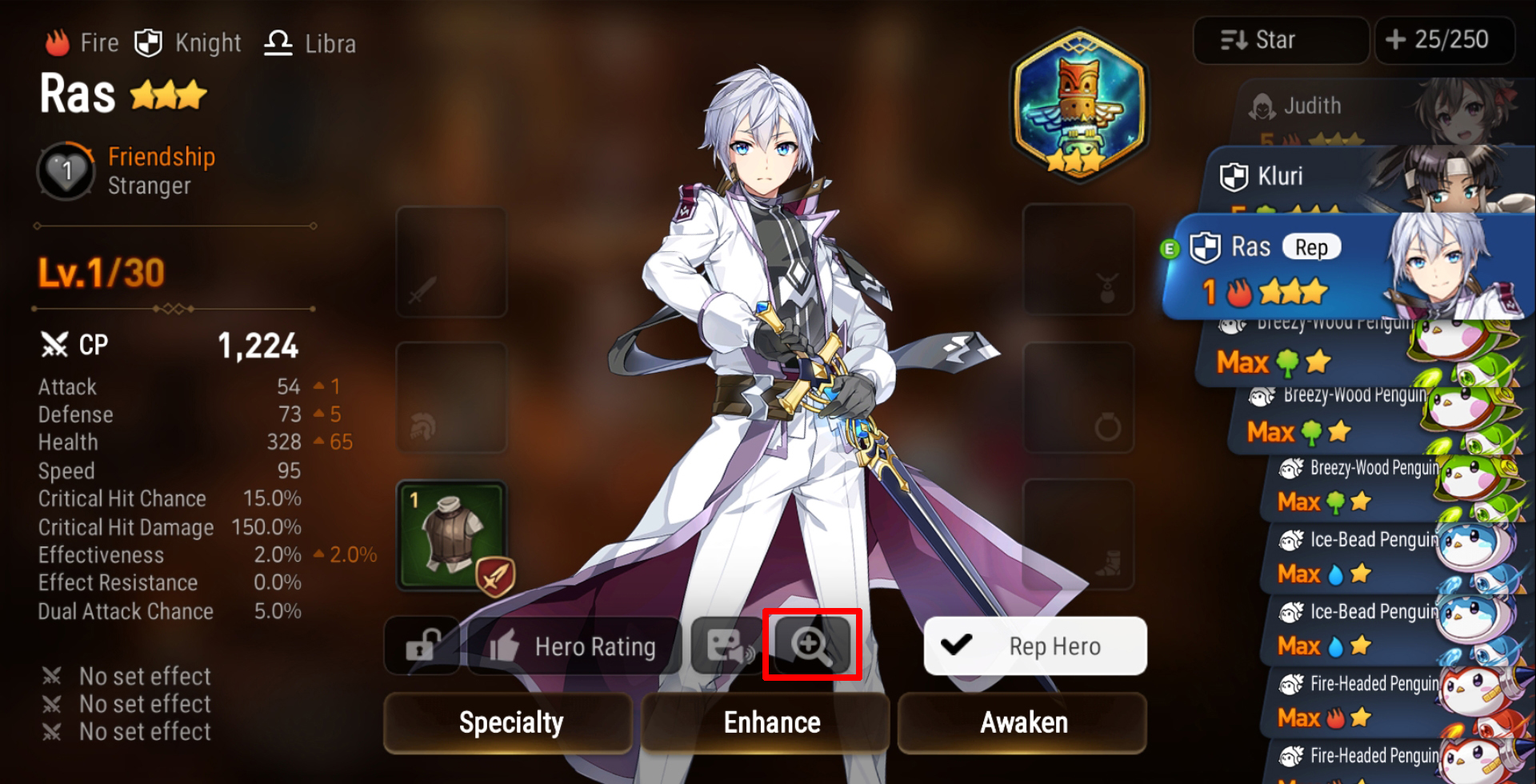 Drag to move the screen, and pinch to zoom in and out.

Double tap to reset the view. 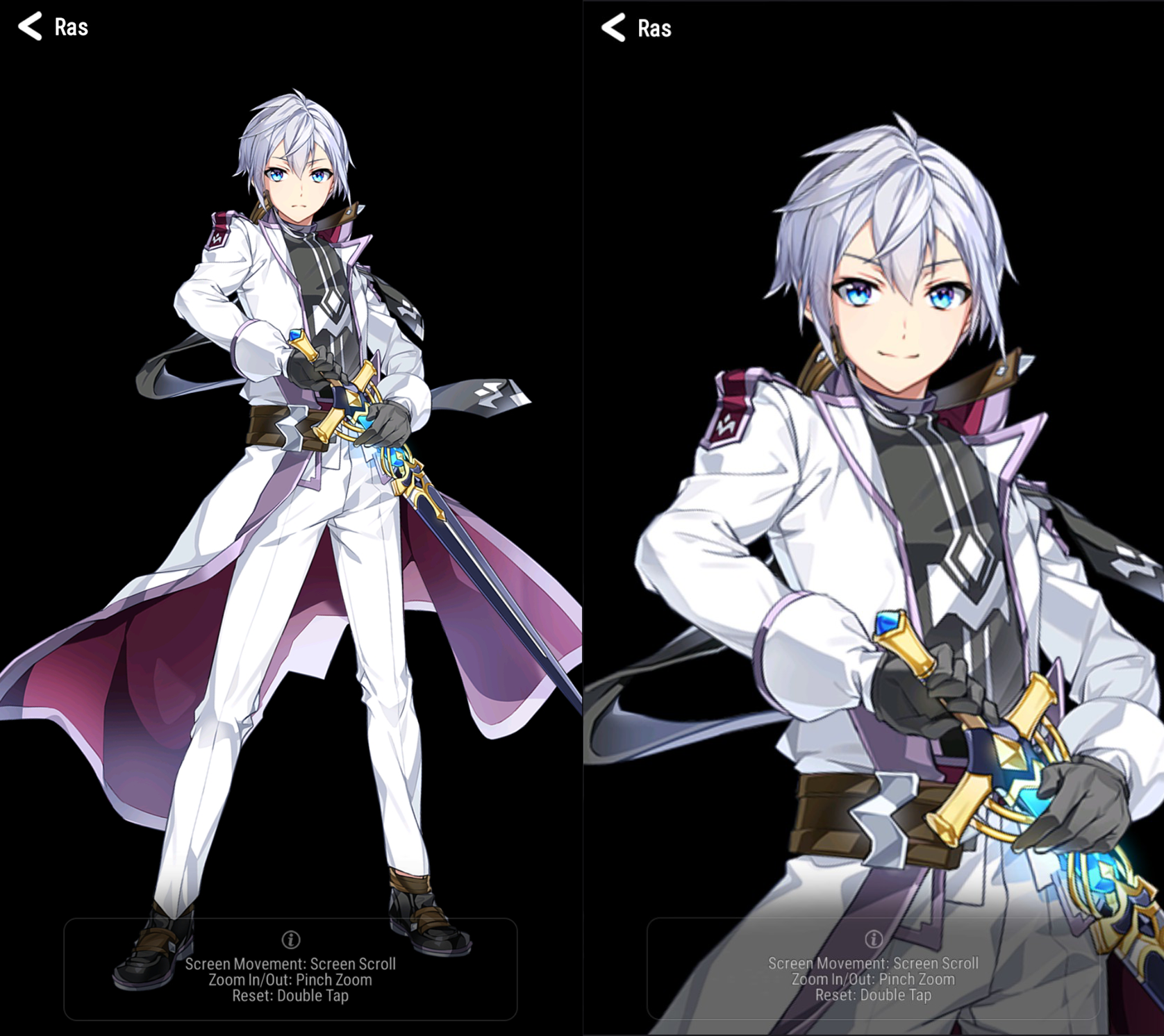 - 5★ Hero Kise and 5★ Artifact Alexa’s Basket have been added to the Covenant Summon.

- The skill description of Karin’s ‘Blade Art: Flash’ has been updated to include information about the ‘decrease defense’ debuff.

- The ‘Vigor’ buff from Ken’s ‘Phoenix Fury’ can now no longer be dispelled.

- The skill description of Ken’s ‘Celestial Kick’ has been updated for clarity.

- When Cidd’s ‘increase speed’ buff expires at the end of a turn, the effects of his skill ‘Wind’s Resolve’ no longer carry over into the next turn.

- An issue has been fixed in which Silk’s ‘Storm Arrow’ did not activate properly at times during Auto Battle.

- An issue has been fixed in which, after dying, Diene’s effects sometimes carried over to the next battle in Hunt.

- The strength of the barrier given to random Heroes by Shooting Star Achates’s ‘Resurrection Magic’ has been doubled.

- In the past, the Klineode and Silva that appeared with the boss in Golem Hunt were not affected by Silence or Provoke because they only possessed one skill. In order to make more sense out of this occurrence, an additional skill ‘Will of Nature’ has been added to their skillset.

- The description of Wyvern’s ‘Fire Breath’ skill has been updated to correctly match the skill. There is no change to the skill itself.

- In Nixied’s Sanctum Zone 3, the enemy no longer receives a barrier when Counterattack Klineode’s counterattack is triggered.

- The window that appears when Retrying in Labyrinth has been improved and additional information has been added.

- On Floor 68, Mucacha’s ‘Surprise Attack’ no longer increases the Combat Readiness of all monsters.

- On Floor 71, Boss Armin’s skillset has been updated to match that of the Hero Armin.

- When a Hero levels up during battle, the Hero’s new, upgraded stats are immediately applied.

- An issue has been fixed in which Boss Monsters’ stun immunity was dispelled after one turn in Adventure and Side Stories.

- In Adventure and Side Stories, Boss Monsters’ skill buff/debuff icons no longer overlap.

✓ Please note that Season 1’s exclusive items (Gladiator's Equipment, Unknown Slate) that were available for purchase via Conquest Points will no longer be available once the season ends.

- In order to allow players to experience the full power of AoE attacks, the number of Sandbags that appear in Skill Preview mode has been increased to 3. 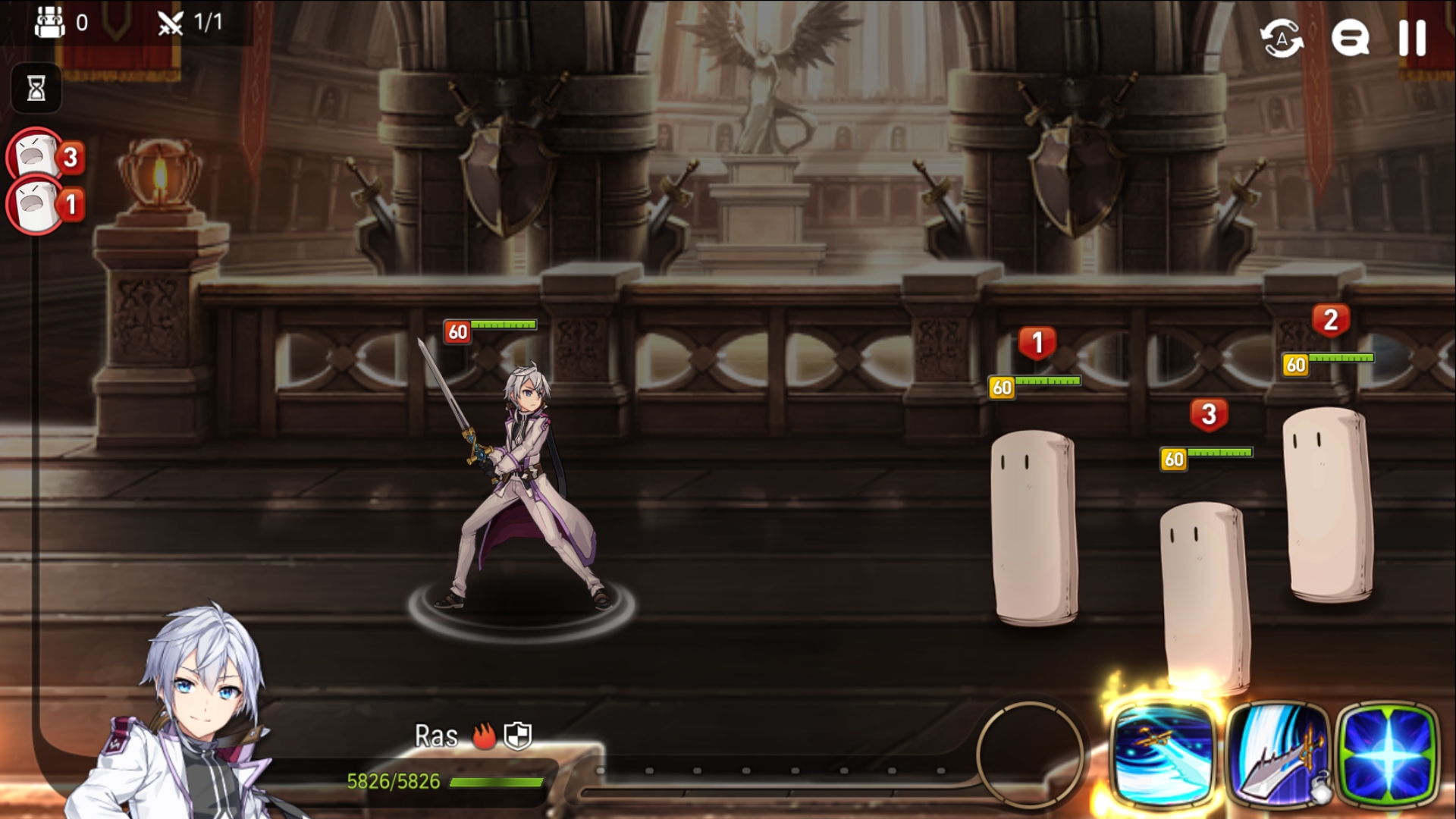 - A notification will now appear on the Hero and Specialty Change icons in the Lobby under the following conditions:

- A notification will now display on the Guild icon in the Lobby when a Weekly Mission has been completed.

- The ‘Vigor’ icon and description have been added to Help.

- An issue has been fixed in which the incorrect background music played during certain stages.

- An issue has been fixed in which, when enhancing Equipment, certain materials were not correctly arranged by level.

- Players will no longer be logged out from other devices when logging onto the same account on two or more devices.