1. Hero Remake - Ken
Ken was designed as an offensive unit whose power increases based on his max HP total that could show great potential near the end of the battle. However, we found that after using Phoenix Flurry, due to losing all of his fighting spirit, his performance fell off dramatically and players were forced to only use his basic skills during battle.
After this remake, we have increased Ken’s skill range and have given him more utility with his second skill, which will allow Ken to be useful in a variety of modes.

At the start of battle, Ken will now begin with 50 Fighting Spirit which will significantly reduce the time it takes to completely fill his Fighting Spirit gauge and therefore allow him to perform better in battle. Previously, it took more than 5 turns for this gauge to be completely full.

If Ken attacks with Burning, he is granted the buff Vigor.

The skill option for Knockout has been changed when awakened.

Celestial Kick is a powerful attack that can consistently increase the speed of the caster for 2 turns while granting them the chance to decrease the target’s defense for 2 turns as well.

If the castor has been granted the buff, Vigor, then the chance to decrease defense for 2 turns increases to 100% and also ignores Effect Resistance, which will help Ken control the tide of battle better.

Due to the change from “Blood Moon” to “Celestial Kick”, the Skill Awakening effect has been changed.

Vigor has been added to the skill Phoenix Flurry.

The skill Phoenix Flurry now grants the caster Vigor for 4 turns while allowing them to gain 15 Fighting Spirit. This change will allow Ken the ability to have a greater effect on the battle for a longer period of time.

The debuffs that decrease the enemy’s attack and then stun them will still be activated by this skill. However, we have moved the defense debuff to the skill Celestial Kick so this hero can assist in battle with more flexibility.

The skill option for Phoenix Flurry has been changed when awakened.

2. Side Story ‘A Small Miracle’ Ending

As Ezerians’ small wishes flew to the sky, a sudden gust of wind blew them away and scattered Wish Papers all over Ezera! As Ras and friends work to recollect the lost Wish Papers and fulfill the wishes on them, not everything goes smoothly...

The third and final week for the Side Story ‘A Small Miracle’ is here!

Once players have cleared all stages on Normal difficulty, World difficulty will be available.

2) ‘Unknown’ Quests are now open. Try to clear them all!

3) Alexa has been added to the list of Enhanced Heroes. 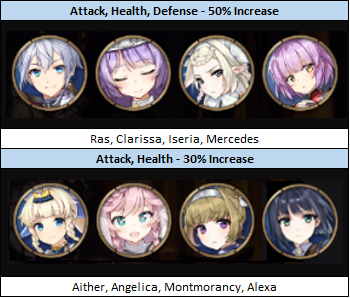 5) Additional Hidden Achievements can be completed.

- When stage 20. [North Tirel Square] is cleared, Hidden Achievements will appear in [Reputation].

Read the hint in the Hidden Achievement and go to the indicated region, and you can find a Wish Paper.

If you make the wish on the Wish Paper come true, you can receive extra Red Socks and Bakery Coupons. 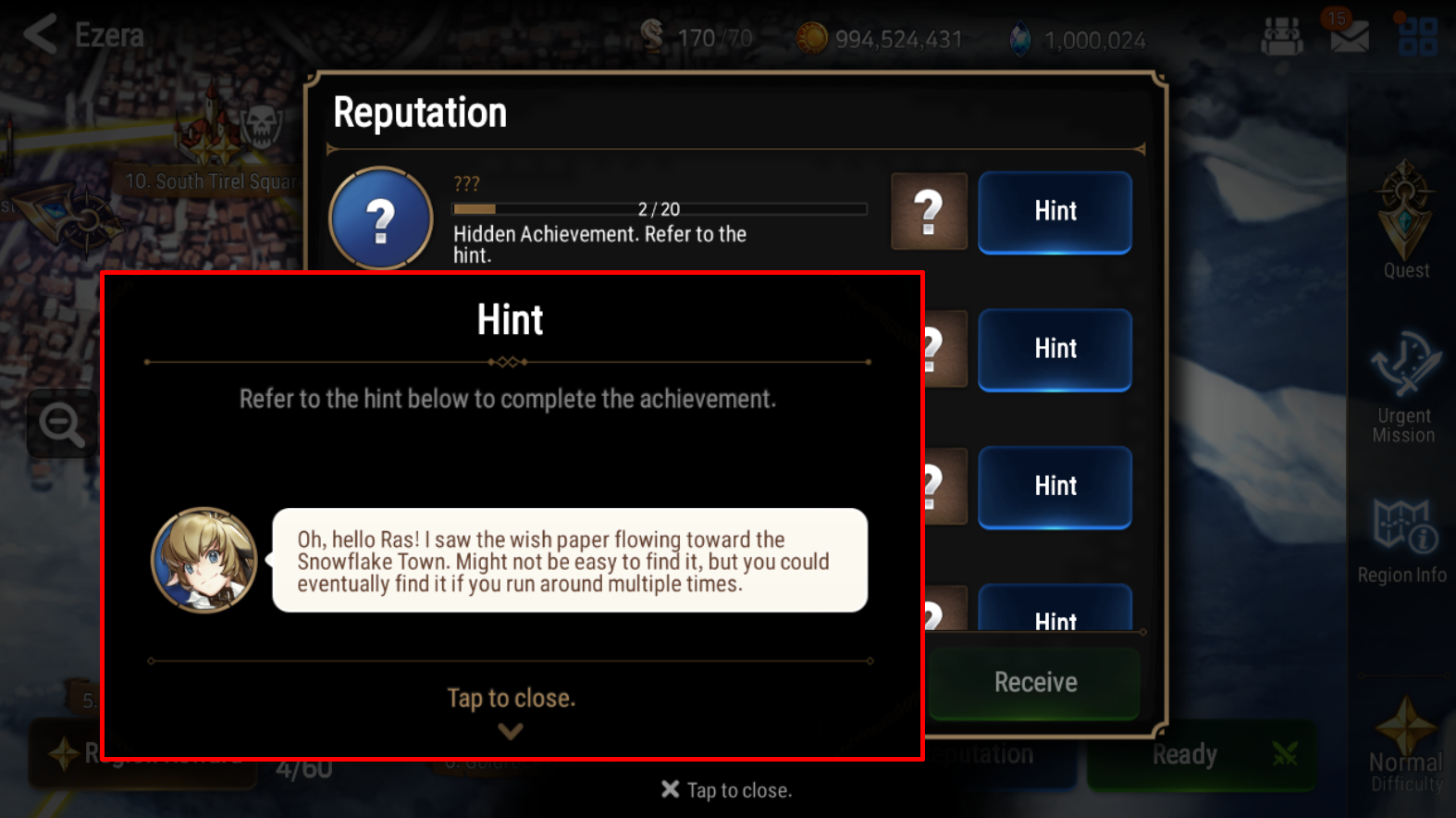 The enchanting witch Serila has come to challenge our Heirs!

Take on the challenge for a chance to receive your own 4★ Hero Serila!

Serila’s Challenge is available in Normal, Hard, and Hell difficulties. Higher difficulties will become available upon clearing the preceding difficulty.

Players have a chance of receiving the 4★ Hero Serila each time they beat the Challenge. 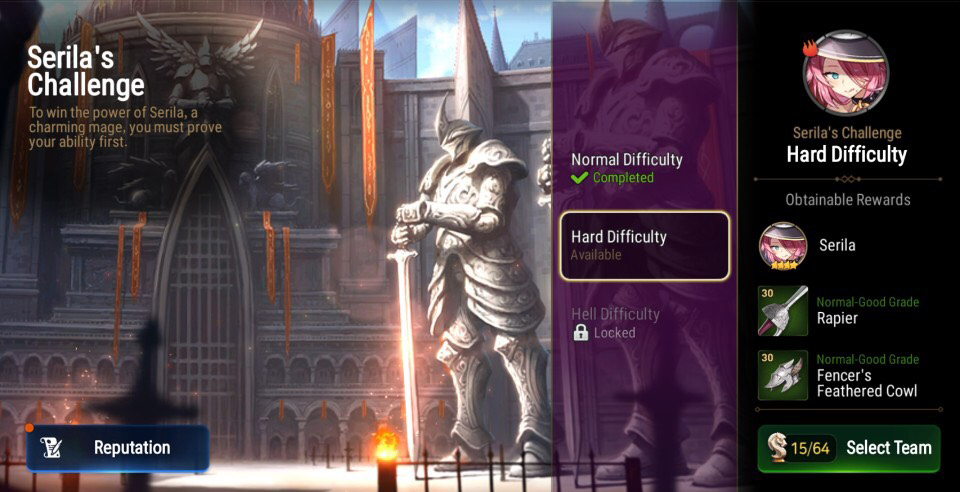 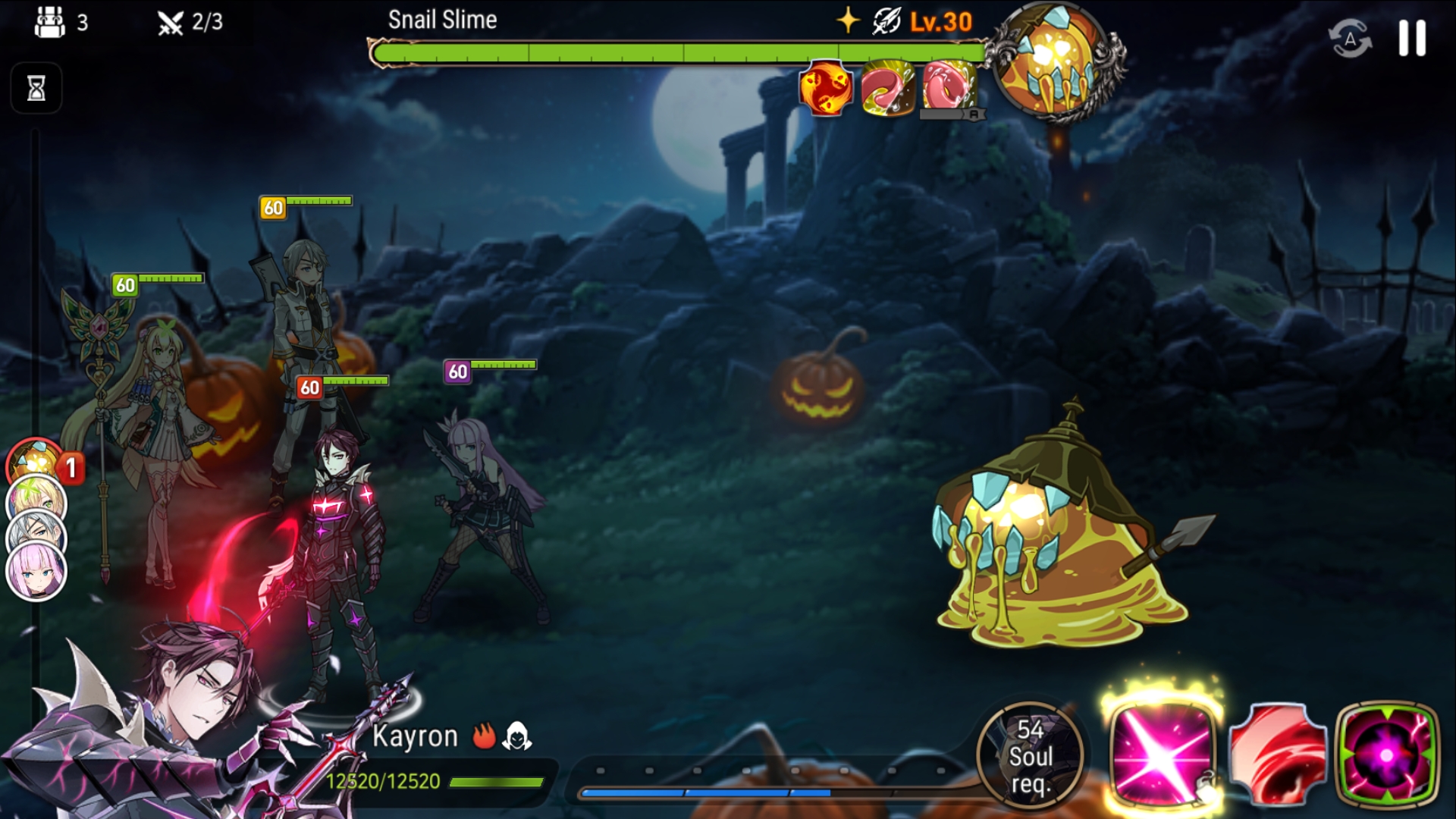 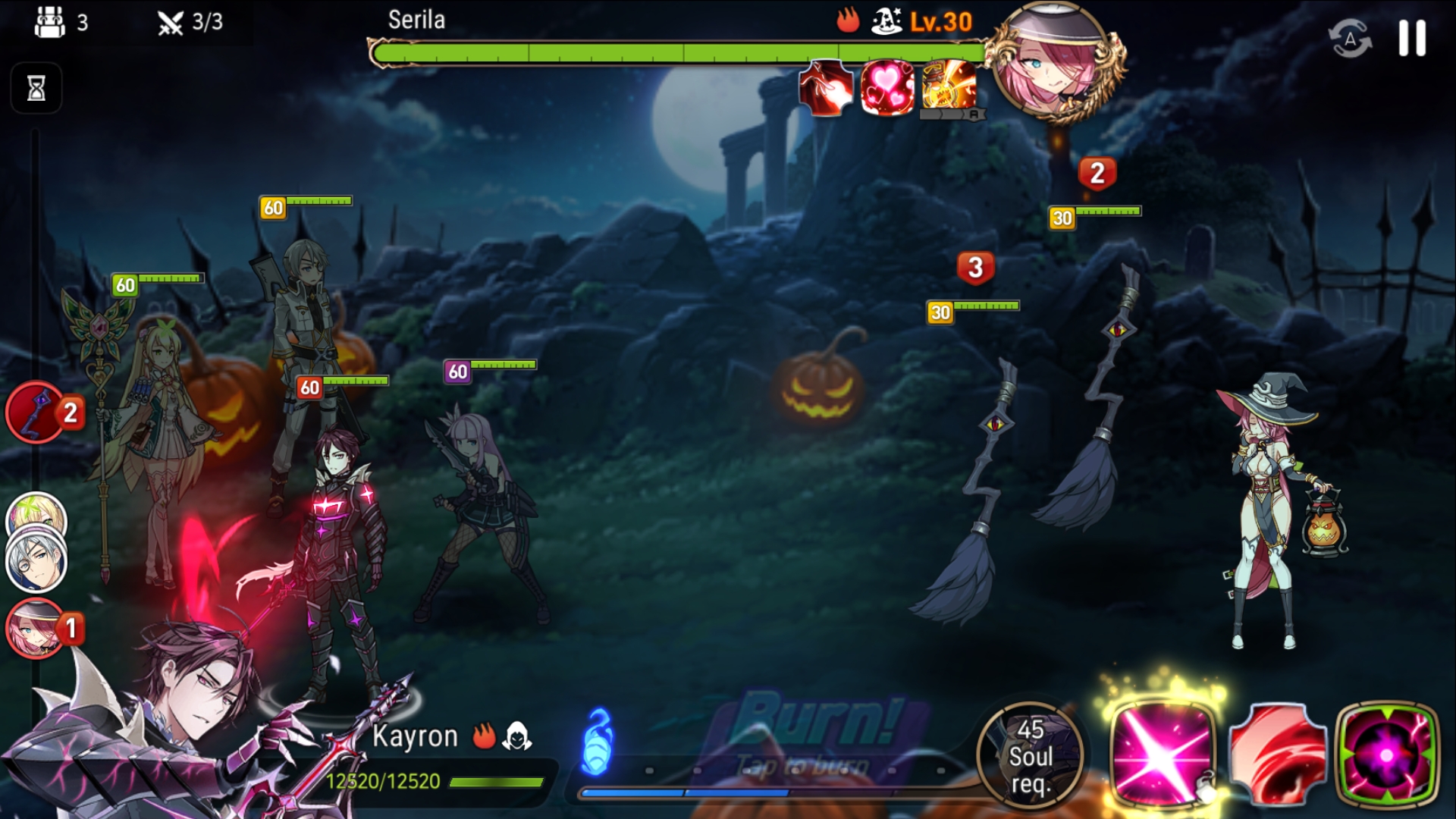 EXP, Stigma, and Gold will be rewarded upon beating the Challenge, and Charms, Equipment, and the 4★ Hero Serila also have a chance to drop.

※ Accessories (Necklaces, Rings) cannot be obtained from this Challenge.

- Serila is an event Hero who can only be obtained during the Challenge duration, and likewise cannot be used to Enhance or Promote other Heroes.

Serila can only be used to Enhance, Promote, and/or Memory Imprint herself. Additionally, Silver Transmit Stones will not be issued upon Transmission.

Reputation has been added to this Challenge. 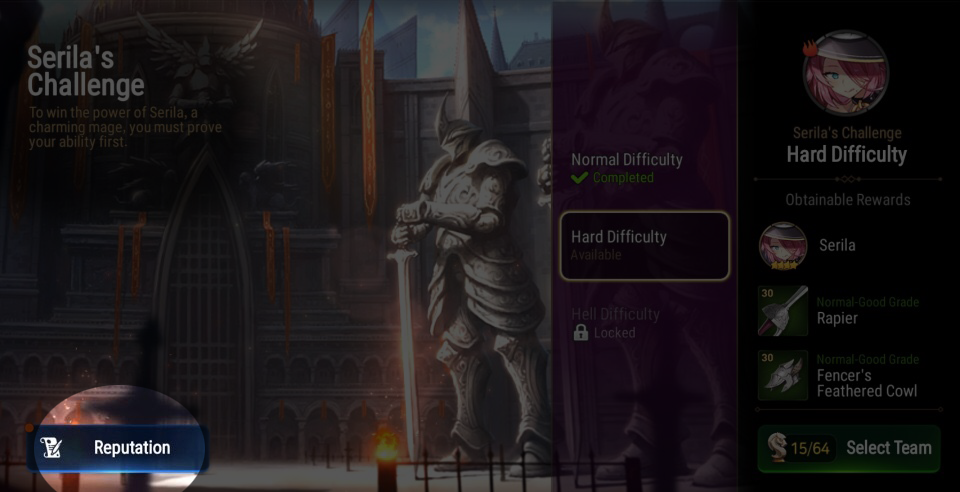 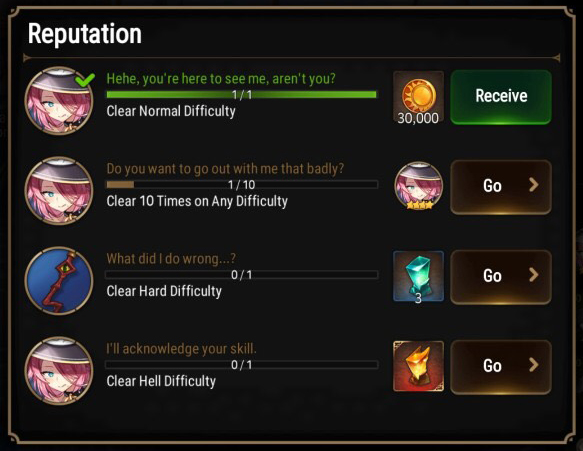 - The rewards that can be obtained from the Raid Labyrinth Royal Capital Azmakalis now changes on a weekly basis. All players will receive the rewards in the same order, regardless of which part of the Raid they complete first. After the weekly reset, new drop items will be decided for the coming week.

- In Zone 1 of Royal Capital Azmakalis (Hell Difficulty), the ‘Cannot Buff’ debuff that is applied to the target of Devourer Arahakan’s skill ‘Crisis Response’ now subsides as intended.

- In Zone 1 of Royal Capital Azmakalis (Hell Difficulty), when the Azimanus Scout appears with the Boss and steals the Revive buff, the buff is now immediately removed.

- Typos in the Boss Guide for Royal Capital Azmakalis have been corrected.

- When a battle begins after selecting [Retry], portraits on the Combat Readiness meter no longer incorrectly displays the death portrait.

- The maximum health and attack of Monsters in Abyss has been decreased by 5%.

- When clearing a stage and moving to the next stage, an [Arrange] button now appears if the player’s inventory has run out of space.

> When players tap on the [Arrange] button, they will be taken back to the previous screen (World Map or Difficulty Select) and the Inventory window will appear.

> As before, the [Arrange] button will not appear for Wandering Merchants, the Logistics Officer, and other merchants that appear in Labyrinth.

- In Transmission, the UI of the first Hero on the list no longer overlaps with its surroundings when the Hero is selected then deselected.

- Tenebria no longer shakes from left to right when using her skill ‘Nightmare’ on iPhone X.

- Line breaks have been added for long lines of text in Side Story Reputation notifications.

- Tutorials have been updated to better match the updated Battle Results UI.