The stats for Heroes at certain levels has been improved and adjustments have been made to certain Hero/Artifacts and buffs.

Bugs that certain artifacts had have also been fixed. Please see below for more information. 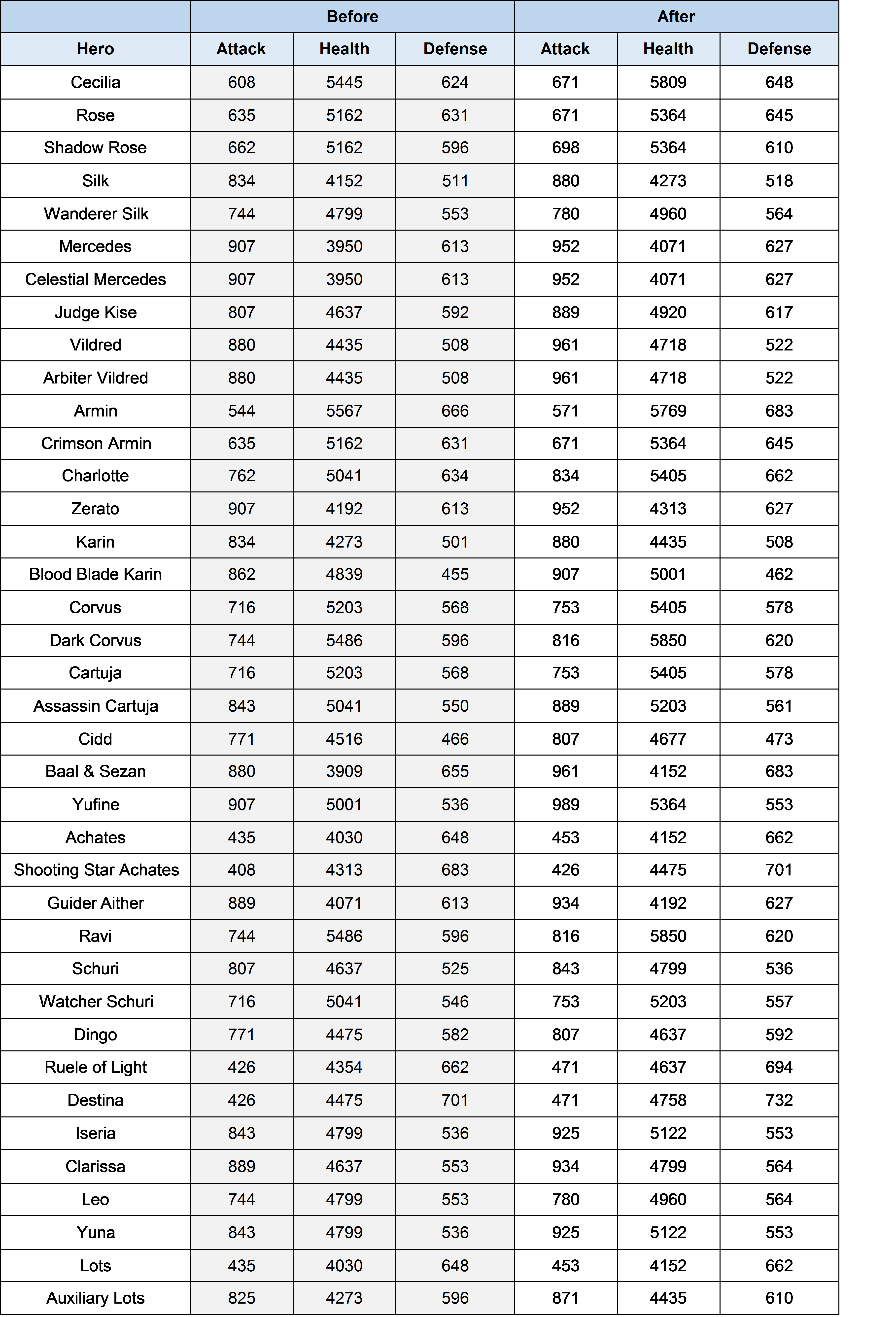 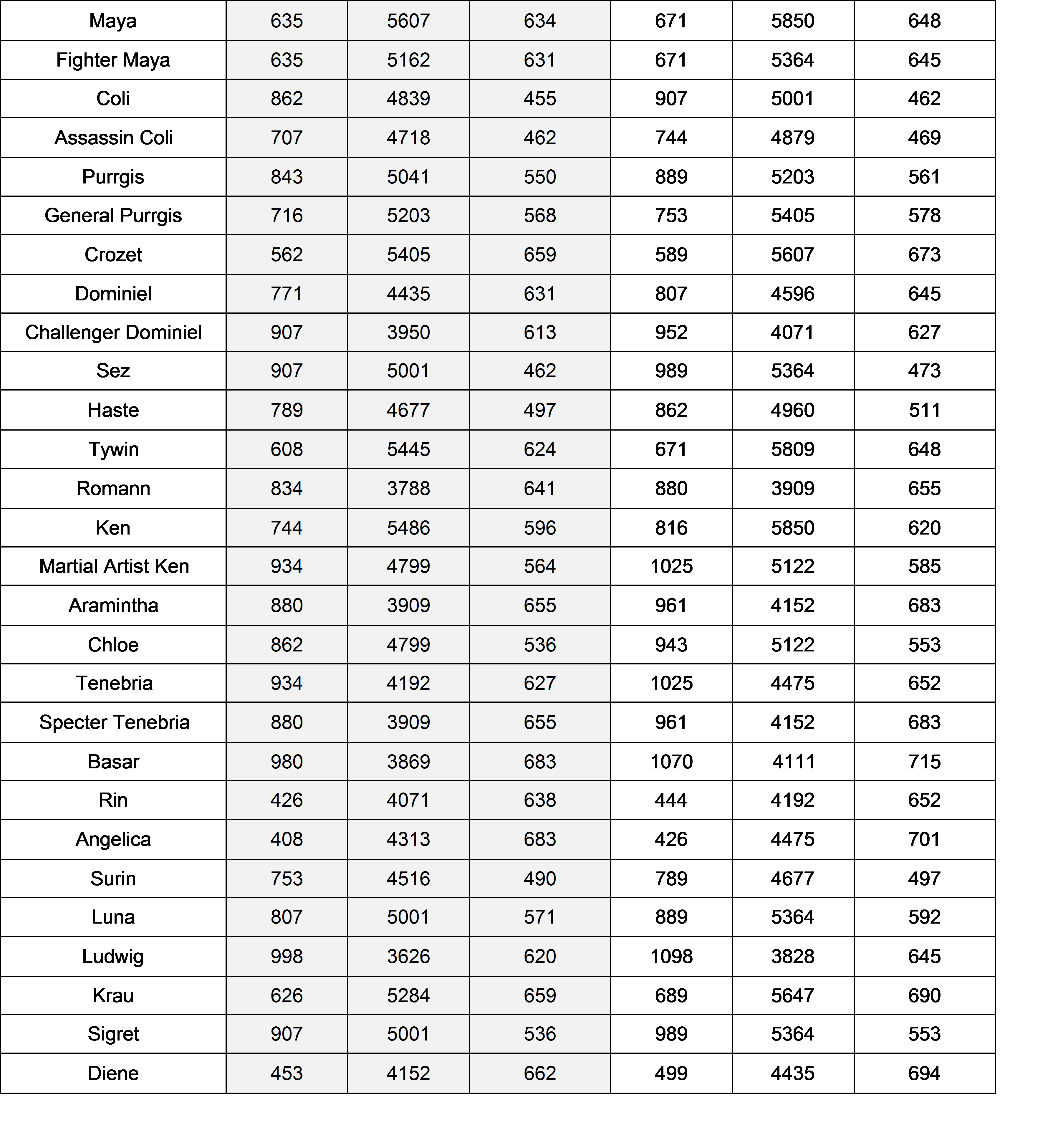 The text that displays when enhancing the skill ‘Material Repair’ has been adjusted from increased effects to increased bleeding effects.

Adjustments have been made so that there is a 40% chance to activate Quick Grill when the skill ‘Material Repair’ is used.

Cooldown for the skill ‘Dark Cloud’ has been reduced for 1 turn.

The chance for all effects of Last Requiem to trigger has been increased by 15%.

Adjustments have been made so that the caster is granted increased Attack and Speed for 2 turns when the skill Dragon’s Roar is used.

Adjustments have been made from dealing additional damage if stealthed to activating ambush again if stealthed when the skill Ambush is used.

Adjustments have been made so that a barrier is granted for 1 turn when the skill Accurate Strike is used.

Adjustments have been made so that Combat readiness is decreased by 25% 3 times and not 50%. Also, the stun conditions have been removed.

The skill Dance of Sands is only applied during attack and excludes the caster.

The caster's Critical Hit Damage and the target's Defense are also affected.

Awakening will now cause the damage dealt to increase.

Changes have been made to the skill enhance effects of the Soul Break skill.

Cooldown for the skill, Light's Protection, has been increased for 2 turns.

Cooldown for the skill Cheer has been increased for 1 turn and continuous healing has been removed.

Changes have been made to the skill Disconnect so that a critical hit inflicts bleeding for 1 turn and does not increase attack.

The cooldown for the skill Plagued Strike has been increased by 1 turn and the effect that caused damage dealt to increase proportional to the amount of the enemy's lost Health has been removed.

Damage dealt by the skill Ancient Spear Art has been increased by 20%.

Adjustments have been made so that the speed of the caster and not that of all allies is increased. The max value for this effect has been adjusted to 10%.

Adjustments have been made so that the speed of the caster and not that of all allies is increased when the skill enlightened bow is used. Also, damage dealt has been increased by 25%.

The issue that unintentionally caused a significant reduction in damage when the passive skill, ‘Butcher Corps Gear’, damage decrease overlaps with the damage reduction effect.

The Combat readiness of all allies when the enemy is defeated has been reduced. Also, adjustments have been made so that it does not overlap with the same effect.

The issue that caused the artifact effects to be cleared when a non-attack skill is used after Time Matter is activated has been fixed.

The artifact skill effects have been adjusted so that they are applied to the ally with the lowest percentage of max Health.

The artifact skill effects have been adjusted so that they are applied to the ally with the lowest percentage of max Health.

11. Improvements and Restoration of Materials used when enhancing skills

The amount of MolaGora required when enhancing the skills of 4 and 5 star Heroes has been reduced.

The amount of MolaGora required when enhancing the skills of a 4 star Hero has been reduced by 43%.

The amount of MolaGora required when enhancing the skills of a 5 star Hero has been reduced by 41%.

- When enhancing a skill, MolaGoraGora will not be used anymore.

- You can exchange the MolaGoraGora that you had in the Normal Shop. Exchanging a MolaGoraGora will give you 25 MolaGora.

※ Following balancing adjustments, we will compensate players via the mailbox for any MolaGora already used to enhance 4 and 5 star Heroes’ skill that are in excess of the new costs.

※ Following balancing adjustments, the amount of MolaGora required when enhancing certain skills of 3 star Heroes at certain stages has been adjusted. However, the amount of MolaGora required to fully enhance a skill has remained the same.
※ If a player has not fully upgraded their 3 star Hero's skill and only upgraded the skill to a level which has had its MolaGora cost reduced, the excess MolaGora spent will be returned via the mailbox. (Note added 12/14 at 02:45 UTC)

12. Other Changes and Bug Fixes

- 5★ Artifact ‘Noble Oath’ has been added to the Artifacts list of Covenant Summons.

- 5★ Artifact ‘Noble Oath’ has been added to all Summon Tickets

- 5★ Hero ‘Maid Chloe’ has been added to the Heroes list of Moonlight Summons.

- 4★ Hero ‘Assassin Cidd’ has been added to the Heroes list of Moonlight Summons.

- A bug where players earned less Gold for transmitting certain heroes has been fixed.

- The bug where the voice actors not being shown in the additional features for Diene and Bask’s friendship level has been fixed.

- The ‘e’ icon vanishing when switching the hero positions in your deck has been fixed.

- The ‘e’ icon visually shown with equipped Artifacts in your inventory has moved to the top left side.

- When switching Artifacts, the ‘e’ icon is now visually shown on the top left side.

- The typo issue, where ‘Magahara’s Tome’ has been shown when the 4★ Soul Weaver exclusive Artifact, ‘Magaraha’s Tome’ takes effect,

This made players prioritize heroes with defense effects, which restricted the variability of team compositions. This change will hope to encourage more dynamic team compositions that accommodate other enhance effects.

- The cost for un-equipping an Equipment will temporarily go down to 0.

└ Reduction Period: After the update ~ Before the 12/20 update

└ When un-equipping, there will be no separate pop-ups, and the equipment will un-equip automatically.

- When you run out of entries for a Challenge, it will be disabled.

- Reputations that are Challenge exclusive has been added.

- The bug where players weren’t able to complete the [Daily] Three Sister’s Quest has been fixed.

- The UI, ‘Battle Start’ does not show when a player yields in the Abyss and the Labyrinth.

- The reward given out on Floor 70 of the Abyss has been changed from ‘MolaGoraGora’ to ‘MolaGoraGo’.

- The visual bug where dead monsters on defense stages in ‘Eulogy for a Saint’ displayed damage taken has been fixed.

- The bug where Heroes weren’t able to switch positions in the team in the Ready Screen in Arena has been fixed.

- Heroes using skills in the WARNING screen has been fixed.

When guild buffs were purchased with an insufficient amount of Guild Coins, there was an issue where players were restricted from purchase upon re-entrance. This issue has been fixed.

- On the normal section of the in-game shop, a feature will be added that will allow players to trade one MolaGoraGora for 25 Molagoras.

- The back button that didn’t function on the home page of the Side Story will be updated.

- The issue where the back button was abnormally shown when players repeatedly opened and closed the battle preparation window will be fixed.

- The arrange button from the ‘Insufficient Inventory’ tab will be disabled when shown while purchasing from Huche in the labyrinth.

- The special character that displayed the range of the hero’s ability will be changed from ‘~’ to ‘-‘.

- The process and system for account reset will be changed.

└ You must now enter your own nickname in order to reset your Epic Seven account. -

- There will be improvements made in how players view each hero’s ability in the hero journal.

└ In the Ability Setting UI, players may now use a slider to change and check the combat stats of different heroes based on their number of stars and how many stones are awakened.

- The Morale status indicator after the camping chat is over has been enlarged.

- The issue in which the light from Challenger Dominiel’s eye in Nixied’s Sanctum did not disappear will be updated.

- When a hero is awakened on the English language, the issue where the ability name overlaps will be fixed.

- The insufficient rune notice UI in the English language will be updated into a more sufficient/adequate size.

- Typos from the story will be updated.

■ Preview for the next Side Story, ‘A Small Miracle’

-Next week, as we shift towards a new year, the side story “A Small Miracle” will begin!

Look forward to our newest side story as Ras strives to deliver happiness to all those around him!