** Additional information about next week’s major update will be announced in Dev Notes later this week.

We have prepared a special appreciation gift for all Heirs.

During the event, log in every day to collect a special gift from your mailbox.

■ New Item “Light of a Million”

- A million lights were released asking for aid. To those heroes who answered that call, a token of thanks. 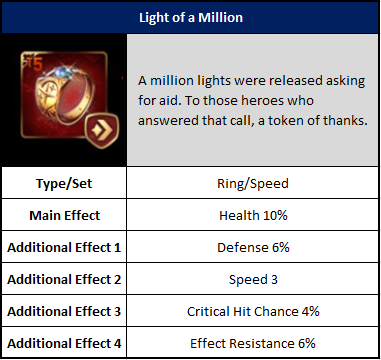 2. MolaGora and Goblin Challenges return for a limited time!

In celebration of 1,000,000 downloads, the MolaGora and Goblin Challenges have returned!

The MolaGora and Goblin Challenges will be of a singular difficulty.

The Challenges will be marked as completed upon defeating all enemies in the Challenge.

Graphics have been improved and bugs have been fixed for certain Heroes.

The skill Light Ascending’s tooltip has been updated to accurately reflect the skill effect.

A bug in which using the skill Sequential Cutter did not give any Soul has been corrected and the skill now provides 1 Soul when used.

The skill Hack’s tooltip has been updated to accurately reflect the skill effect.

The skill Urgent Regen’s tooltip has been updated to accurately reflect the skill effect.

The skill Attack Command’s tooltip has been updated to accurately reflect the skill effect.

The skill Guard’s tooltip has been updated to accurately reflect the skill effect.

The skill Spirit’s Call’s tooltip has been updated to accurately reflect the skill effect.

Fixed an issue in which the skill Discipline occasionally triggered even on counterattacks which were not Dual Attacks.

- Fixed an issue in which enemies flickered right before becoming a star after flying into the sky when using Maya’s Finishing Attack skill. 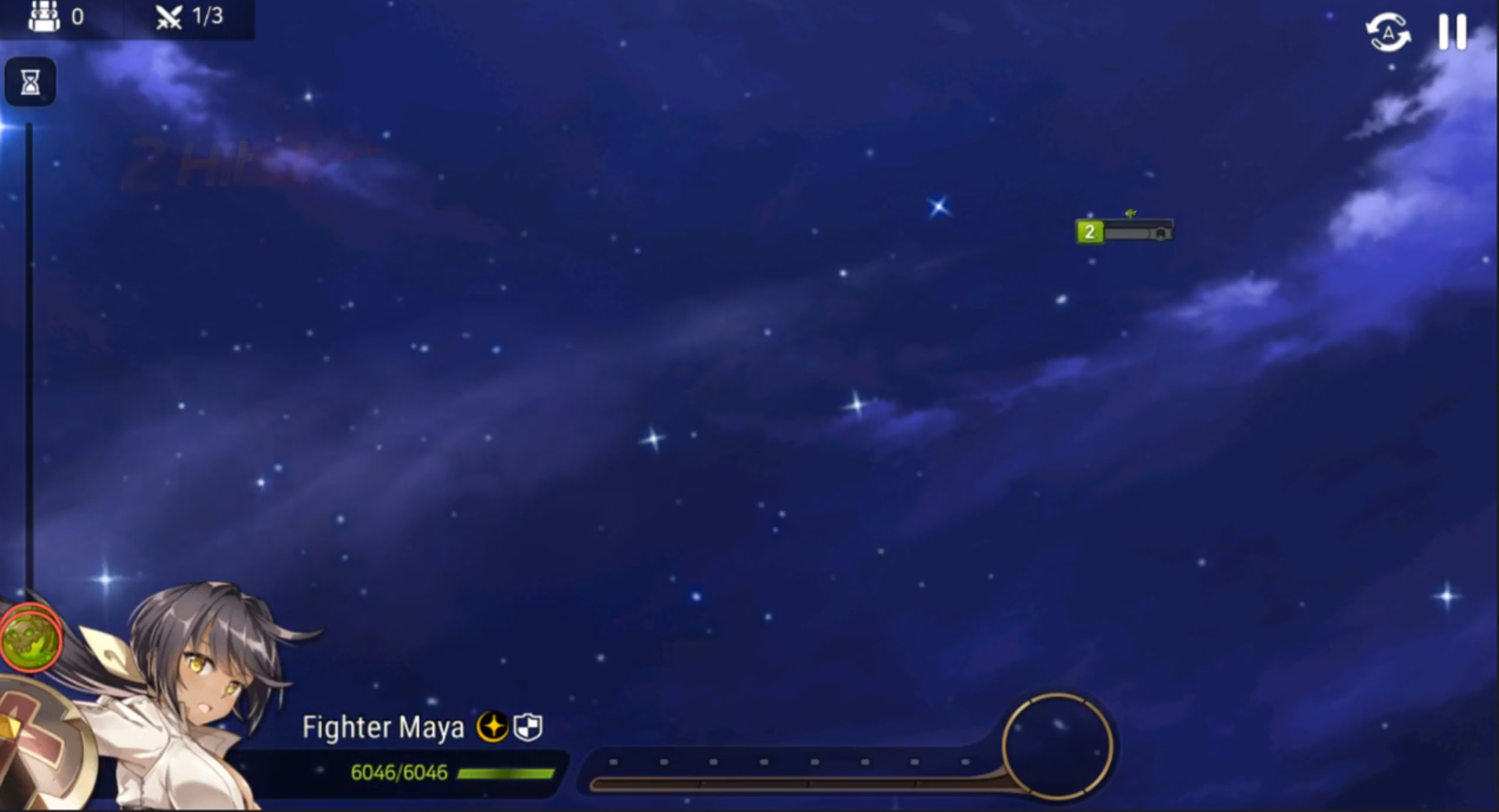 - An effect displaying which buff was applied when using Diene’s Blessings of the Goddess skill was added.

- An effect displaying which buff was applied when using Diene’s Saint’s Prayer skill was added, and her posture was improved. 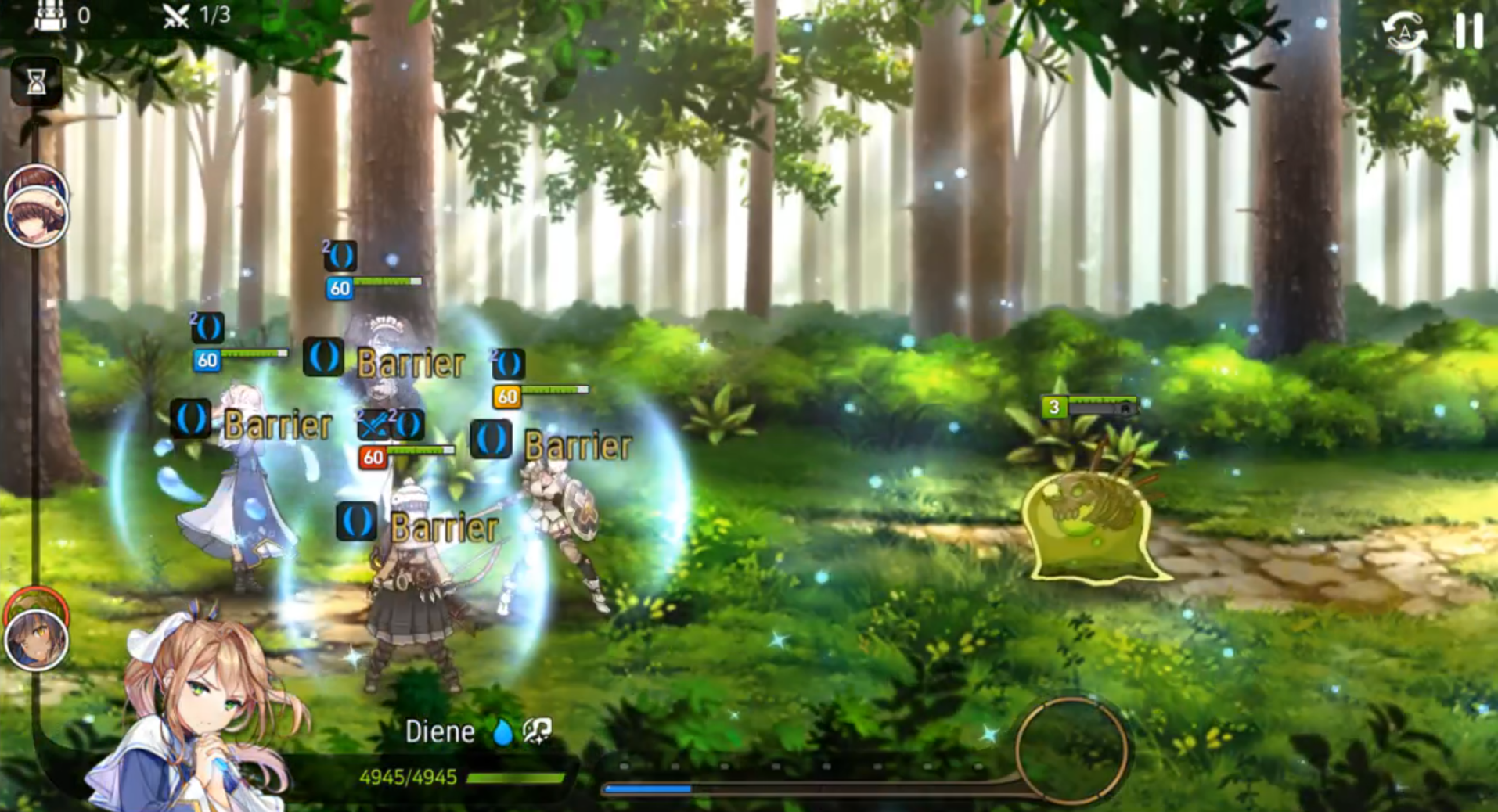 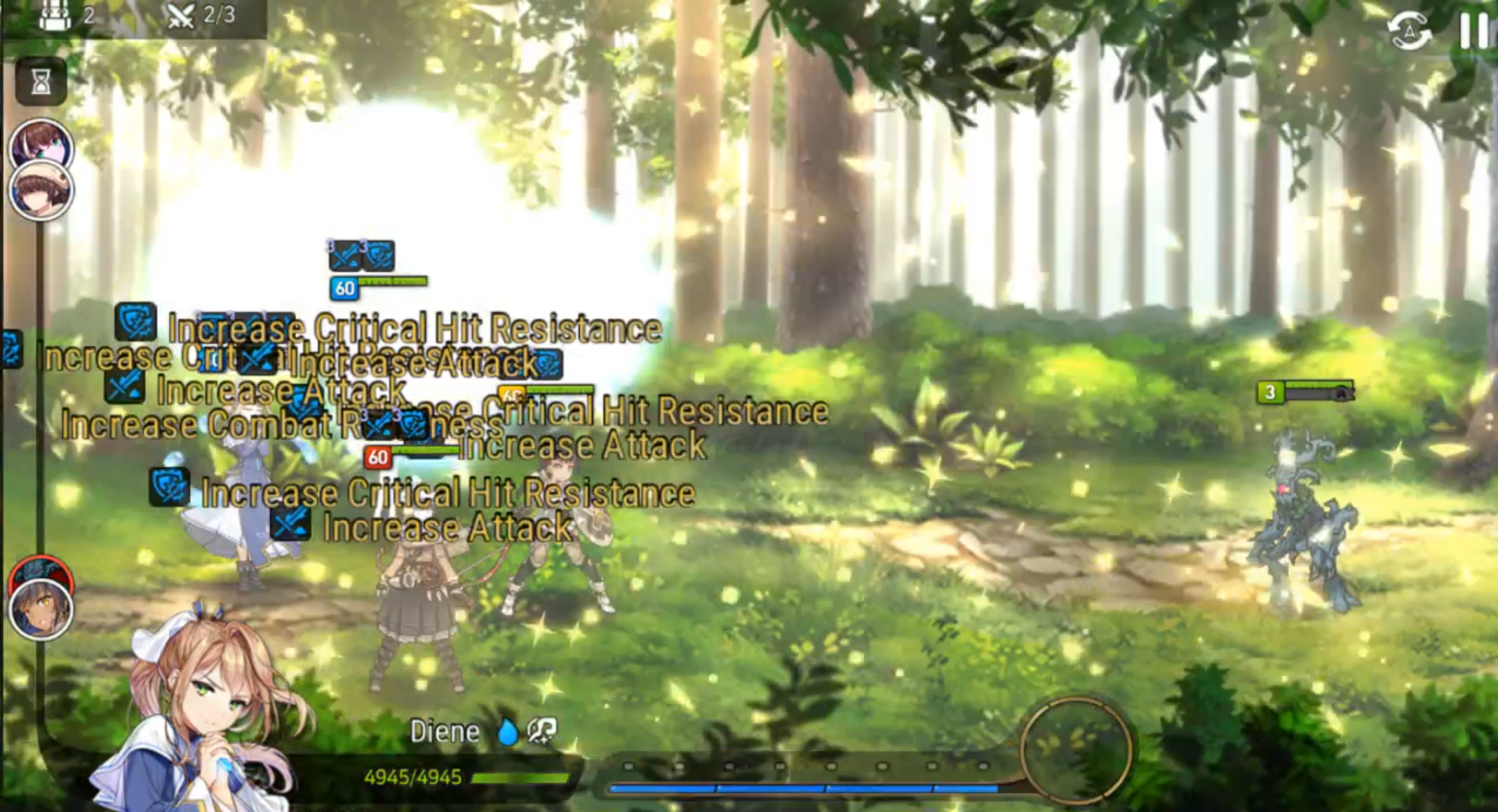 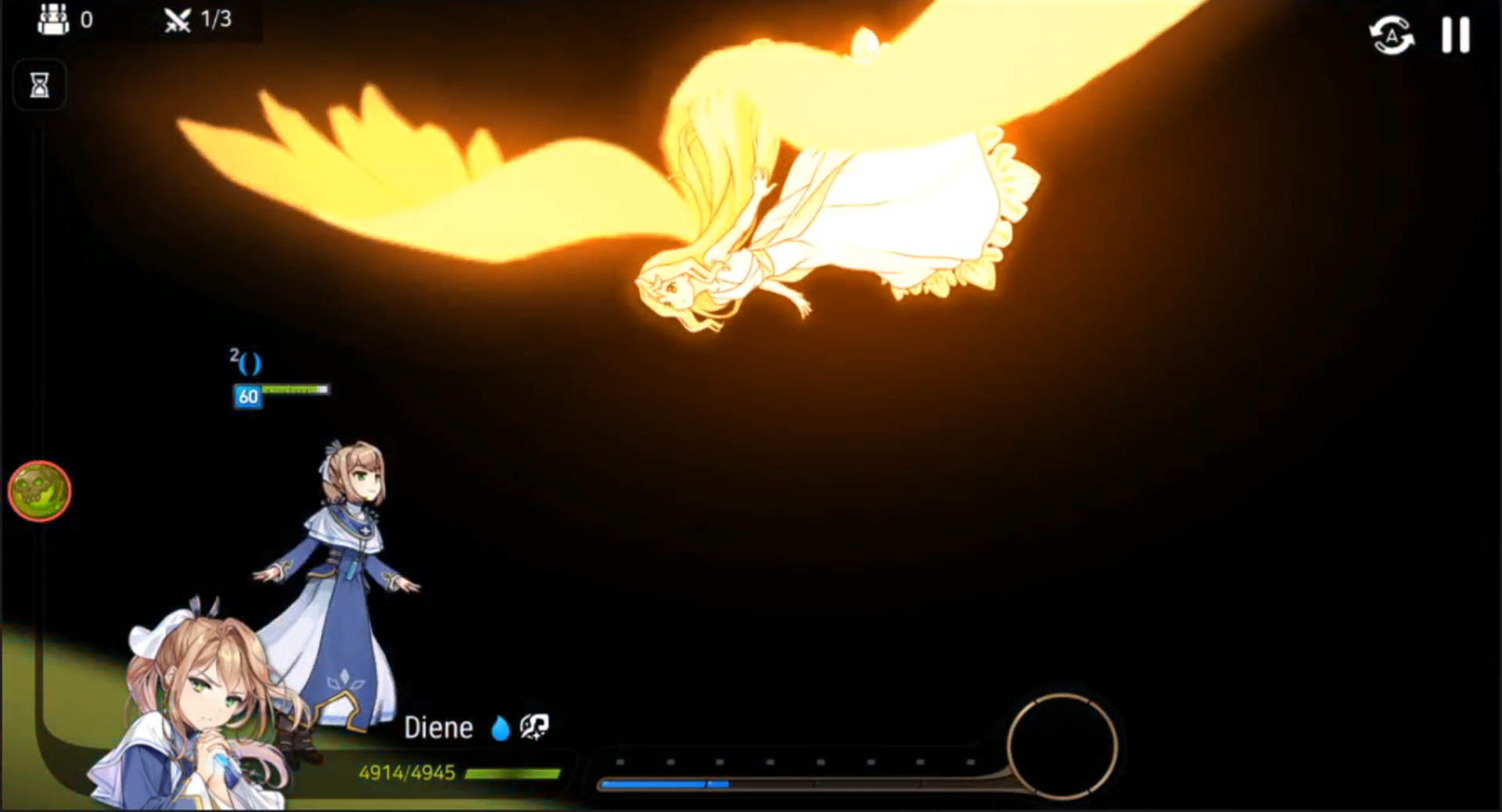 - The UI when Bask’s turn comes up in battle has been improved.

- The animation on the image of Eulogy for a Saint has been improved. 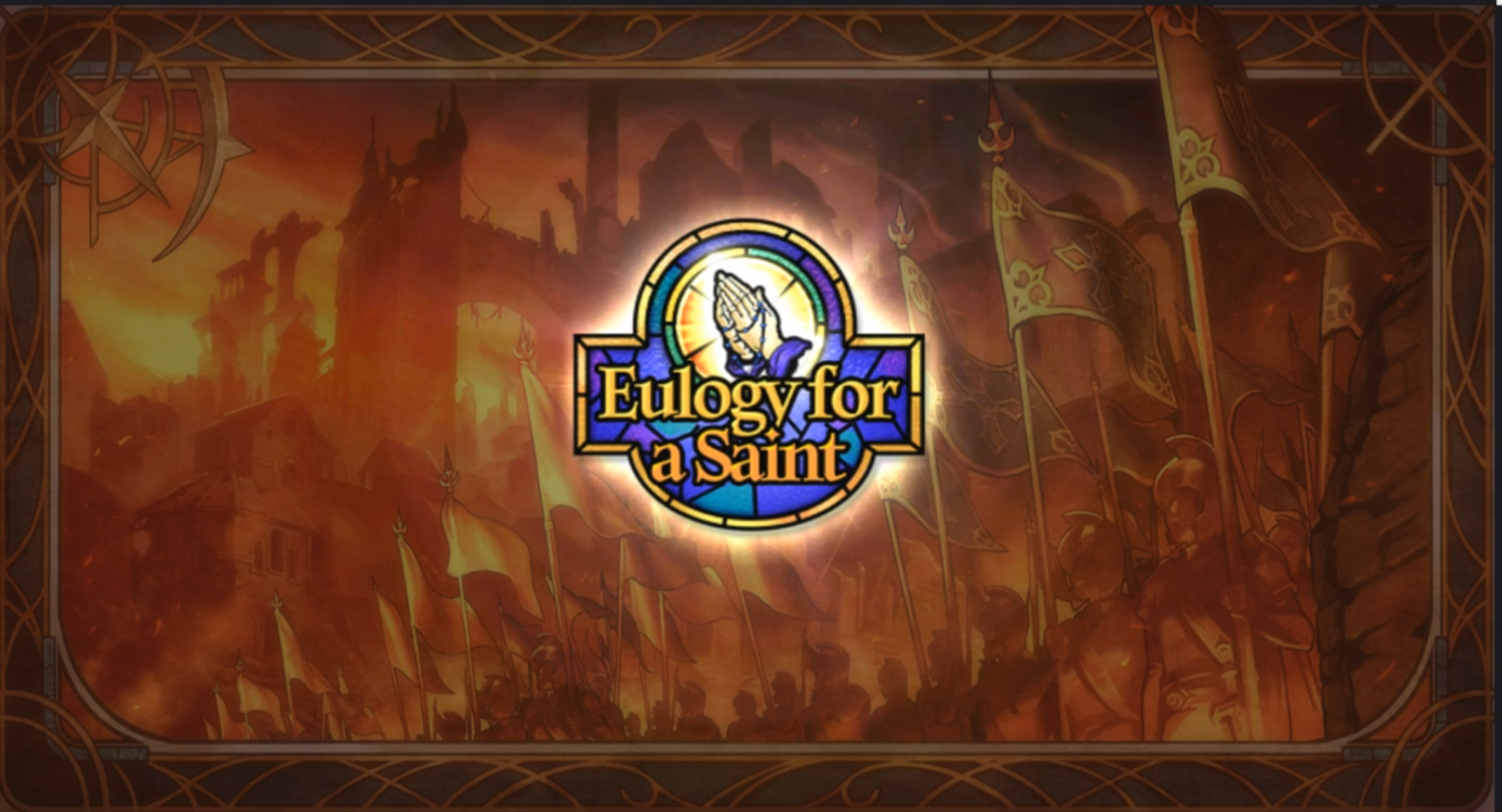 - In [17. Blind Observance Room] of Eulogy for a Saint, there was a bug where the amount of Soul earned from defeating the Dark Klineode resulted in a decimal point displaying, so the rewards have been changed to 10 Soul.

- A bug in which monsters defeated in [16. Jail Pit] of Eulogy for a Saint did not count towards the achievement [Without Hesitation] has been fixed.

- Diene’s expression now changes once a player makes a purchase from the Exchange.

- The reward for the quest [Hermit Forest] was a Fire-Headed Penguin (1★) instead of a Fire-Helmet Penguin (2★), which was the originally intended rewards. The original reward will be delivered to players’ mailboxes after the update goes live.

- When the boss in stage [10-S3 Silver Monarch Plain], Dark Corvus, used the skill, ‘Macerate’, there was a bug where an unknown buff effect was displayed, and has been fixed.

- On Floor 61 of the Abyss, the barrier that appears after

- The boss on Floor 61 of the Abyss, Krau, now properly gains a barrier after he uses the skill ‘Art of Fighting’.

- Arena matchmaking has been improved.

- The scope of players that a player may be matched against has been broadened in all leagues, and random matchmaking has been added to allow players to meet a wider variety of challengers.

- Following these changes, we will be keeping an eye on Arena and will implement further changes if necessary. Some of the changes being considered are:

1. Facing the same player only once per day (only in certain lower leagues)

2. If you keep losing to a certain player without refreshing your opponent list, your points will not go down after a certain point.

- The artifact equipped to Elson in Hell Difficulty of the NPC Challenge has been changed from Abyssal Crown (Mage) to Water’s Origin (Soul Weaver).

- Starting levels in the NPC Challenge on Normal difficulty have been changed to the following:

- A bug has been fixed in which resources were deducted from both the Captain and Vice-Captain of a guild when purchasing lasting effects from the Captain Shop simultaneously.

- After clearing a stage and selecting “Try Again” but then choosing not to begin the battle, players will no longer be returned to the Lobby.

- Players will now be able to change their team arrangement and Guardian from the battle ready screen. 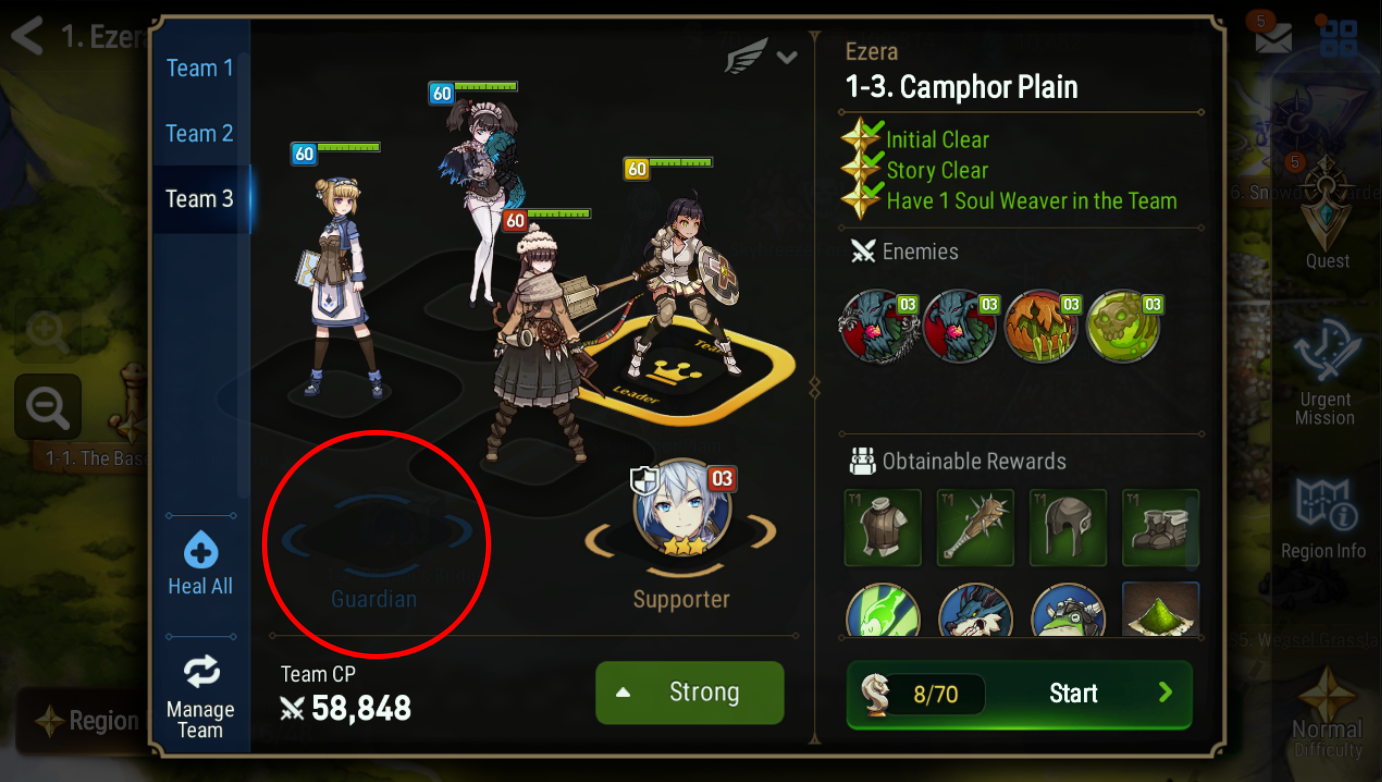 - A bug has been fixed in which the Heal All button could not be used when only one Hero is on the team.

- A bug has been fixed in which the game would occasionally freeze when players tapped on the Lasting Effects button on the battle results screen.

- A notification has been added so that players may check limited-time challenges and events from the battle menu. 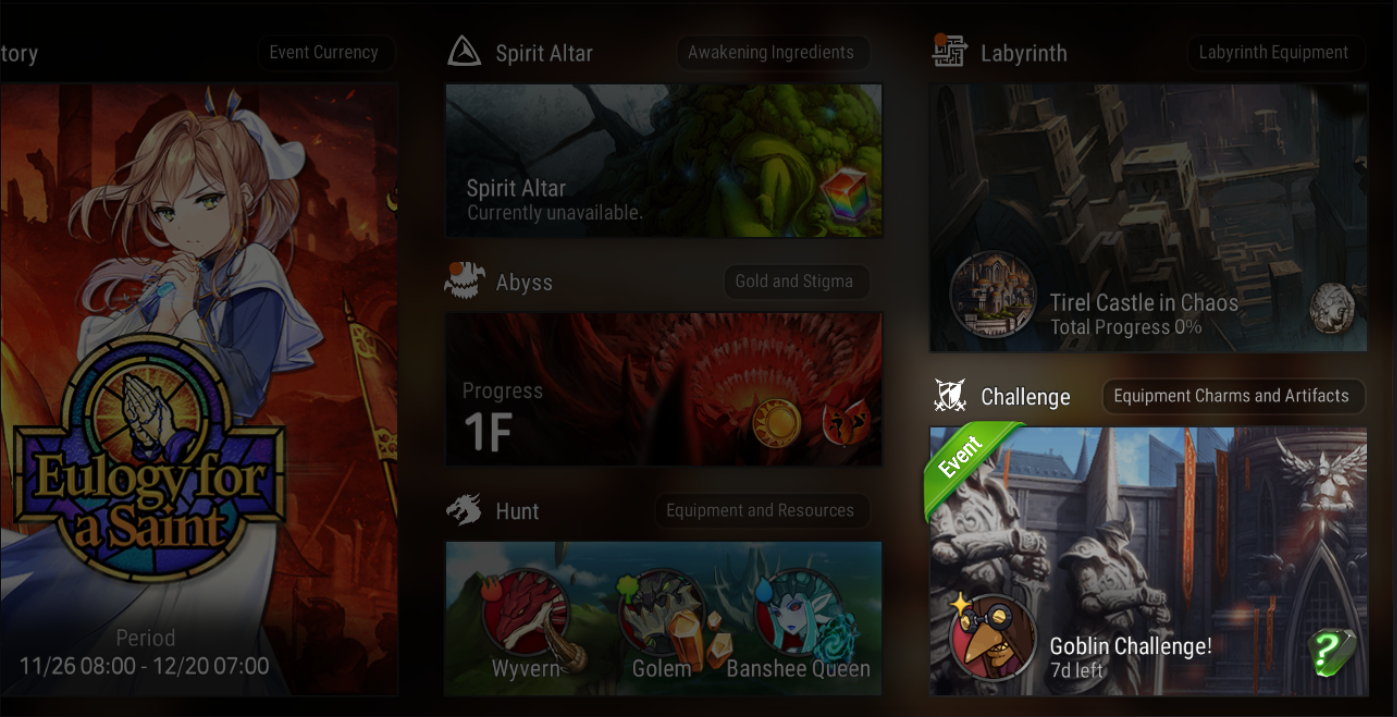 - The Quest menu no longer closes after accepting Quest rewards.

- An issue in which, in certain situations, the app restarted when equipping equipment has been fixed.

- English text in the Hero Background has been made to appear more natural.

- The ‘Hero Rating’ button has been made to appear cleaner in English.

- A bug in which the help text explaining Critical Hit Resistance did not display properly in English/Traditional Chinese has been fixed.

- Errors in portions of the story have been fixed.