1. The new heroes Diene and Bask have arrived!

Ezera’s saint, Diene, recipient of the Goddess’s revelation and the leader who brought Orbis’s people to victory, is here.

Say hello to the girl who would later become the queen of Ezera! 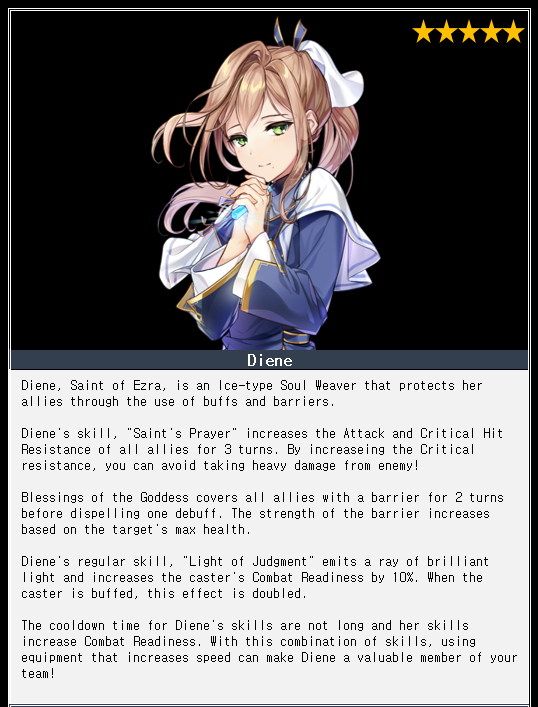 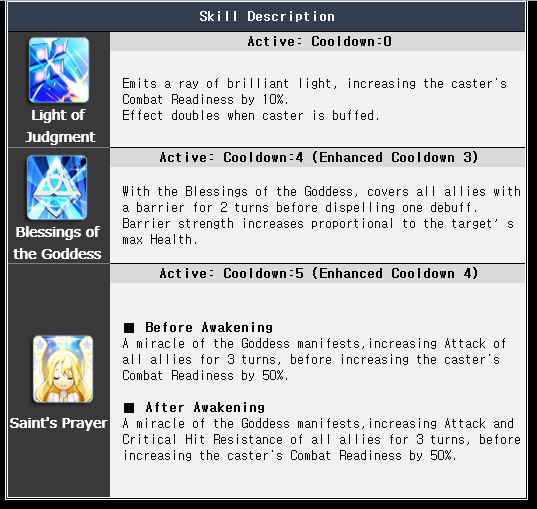 - Receive the hero Bask by playing the side story “Eulogy for a Saint”. 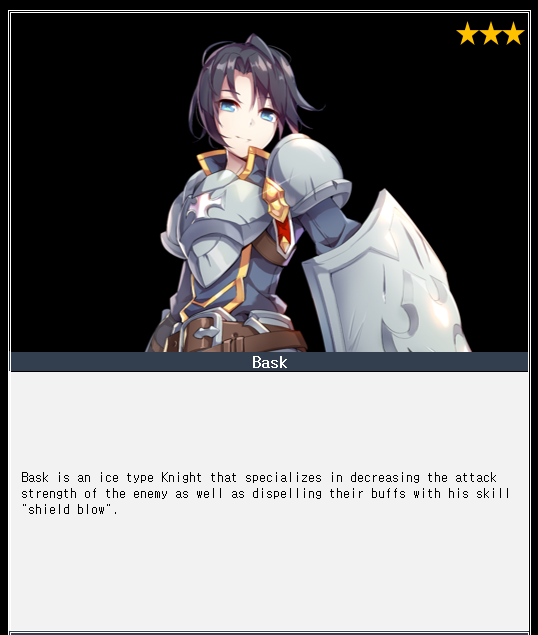 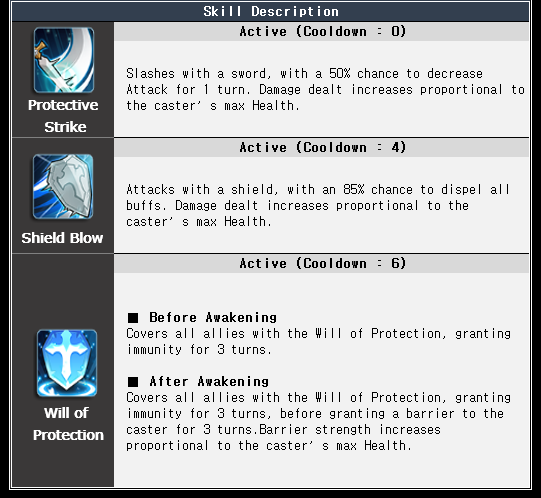 2. A new artifact and memory imprint item have been added!

A new artifact and an item used exclusively to Memory Imprint the three star Hero Bask have been added.
■ Noble Oath

During the event period, players will have a higher chance to Summon Diene!

1) The Guaranteed Summon System will apply to this Limited Summon Banner.

2) Each time the player summons a Hero or Artifact, the summon counter will decrease by 1. (Starting at 120)

4) If the player receives the featured hero before reaching 120 summons, their summon counter will be reset.

4. Special Side Story - A Eulogy for a Saint

Set 20 years in the past, in the midst of the Archdemon War, is Diene’s story.

Find out what happened to Diene and the other heroes in this Side Story!

1) The following Heroes receive benefits when used in Diene’s side story. 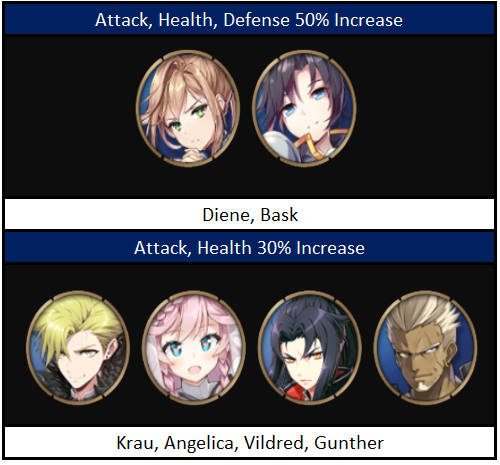 4) Some quests will become available after completing Preceding Achievements.

5) Within the side story, “A Eulogy for a Saint”, there are special “defense” stages. On these stages you must stop waves of monsters from coming!

6) Players can also receive Urgent Missions while playing the side story.

8) Players must clear all the earlier stages in order to advance to the later stages in the 3rd week.

- In order to prevent spoilers in the side story, players will unable to see the names or details of quests they haven’t started yet.

- In the side story, players will be able to use Diene as a supporter.

- In the side story map, players will move as Diene on the map.

- On the world map, players can tap the [?] button in the upper-left hand corner in order to open the side story help guide.

Try out the locked quest after clearing all the connected stages and achievements!

Defense stages are a little unique in that players must stop wave after wave of monsters. You will need to be extra prepared though, not only because there are more monsters than normal, but also because you will not be able to utilize any statues! Instead there will be special monsters which will give you various benefits upon defeating them.

Players can earn quest and reputation rewards such as the 3★ Hero Bask as well as event currency, which can be exchanged for the old pocketwatch(Bask's Memory Imprint item) ,along with Molagora seeds and other great rewards!

2) Conditions for all Side Story Reputation have been re-balanced.

There have been some balancing changes made in multiple areas.

For more detailed information regarding these changes, please see below.

The cost to upgrade equipment using gold has been decreased by 40% when upgrading via charms.

The drop method for Ancient Coins in the Labyrinth has changed.

- Before: In battle and in treasure chests, piles of Ancient Coins would appear according to a certain schedule.

There was a chance that ancient coins could be obtained by battle in addition to finding them in treasure chests and piles of stones.

- After: Now you can obtain ancient coins regardless of probability from battle, and the chances of getting normal equipment and Labyrinth equipment have increased dramatically (the increased rate is proportional to the previous drop rate of Ancient Coins).

The number of Ancient Coins dropped from treasure chests and piles of stones has been changed from 25 to 20.

With these changes players will get more consistent amounts of rewards and will receive more Labyrinth equipment and Ancient Coins by exploring the Labyrinth.

Players expressed frequent dissatisfaction regarding inconsistent amounts of rewards, especially Ancient Coins, thus we are making changes, as listed below.

The amount of Ancient Coins that can be acquired has changed from 25 to 20. However, since players are guaranteed at least 5 rewards, the total amount received is greater.

6. Other Changes and Bug Fixes

- An issue in which, when Ravi used her skill “slaughter” against certain monsters, she would attack too closely has been fixed.

- If an ally is killed in battle, they will now properly show injuries upon entering another battle during Adventure Mode.

- An issue in which a change did not occur despite players changing the difficulty settings has been fixed.

- An issue in which the team that was not selected was placed into battle has been fixed.

- The Combat Readiness bar in battle has been improved so that players can more easily see whose turn it is.

- A feature has been added in which players can check how much currency (gold, stigma, etc.) they have earned after the battle.

- Players will no longer be returned to the main lobby upon closing the quick menu in the Battle Menu.

- Players must tap and hold on skill icons longer to see skill descriptions.

- An issue in which, on levels 9-10 of the Wyvern Hunt, the Wyvern would not do an extra attack when Chloe used her skill “Magic Nail” has been fixed.

- On stage 10-4 of the Adventure, the boss Ravi’s skill “Counterattack” has been fixed so that it now applies properly.

- The NPC teams in the Arena (Normal) increase in difficulty upon being defeated by the player. After the patch, the issue where, even if the player was defeated, the NPC’s level increased has been fixed.

- An issue in which some players did not see any effect displayed upon checking into their guild to receive a reward has been fixed.

- Removed [Blessing of Sincerity] and any related text from the pop-up that appears when players give Aid to other guild members.

- The 5★ hero Cecilia has been added to Covenant Summons.

- The 5★ hero Cecilia has been added to various summon tickets.

- In the secret shop and the Hero Detail screen, the icons and the tooltips which appear when tapped have been moved as to not be obscured by your finger.

- The content in the tooltip has been increased in size as to make reading more comfortable.

- The speech bubbles have been changed so that it’s easier to tell who is speaking.

- The Hero Recovery tutorial image has been changed.

- An issue in which enabling ‘Disable Summon Notices’ in Settings still allowed summon notices to display has been fixed.

- The error occurring for some players when entering the Shop by tapping the back button on the upper left corner has been fixed.

- An issue in which the text of the “Enhance” and “Promote” button was not correctly aligned with the hero sitting on the right has been fixed.

- Clearing the last stages of any Battle content will now display ‘Completed’.

- Added text about the purification reward to the Abyss UI, which will only appear when player have not yet cleared the 1st floor of the Abyss.
- In the window before battle when selecting a guardian, and tapping back In the Combat Ready screen, select a guardian and view the details and then tap the back button, the UI would not close in the order it was opened and now it has been fixed.

- An issue in the secret shop where certain items sometimes displayed as grayed out has been corrected.

- The length of time players must tap and hold the skill icon during battle to see the skills has been changed.