The following heroes receive benefits if used within Destina’s side story. 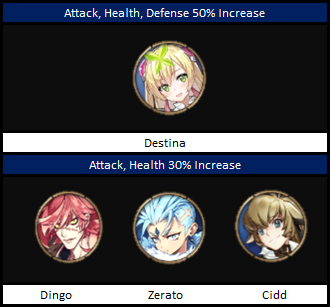 Story Stages) Quests will be cleared upon clearing the stage with an NPC team once.

Regular Stages) Quests will be cleared upon clearing the stage three times.

Quests must be cleared in order to progress to the next stage.

After all quests are cleared, players will receive a 4 Star Artifact Summon Ticket.

- Once players clear all the stages on Normal difficulty, they may play on World difficulty.

- Players can collect rewards for obtaining Stars in both Normal and World Difficulties.