Hello everyone, I'm JustaDream and I will be sharing some tips on how to clear level 10 raid.

This is the lineup which I usually run with my friend, 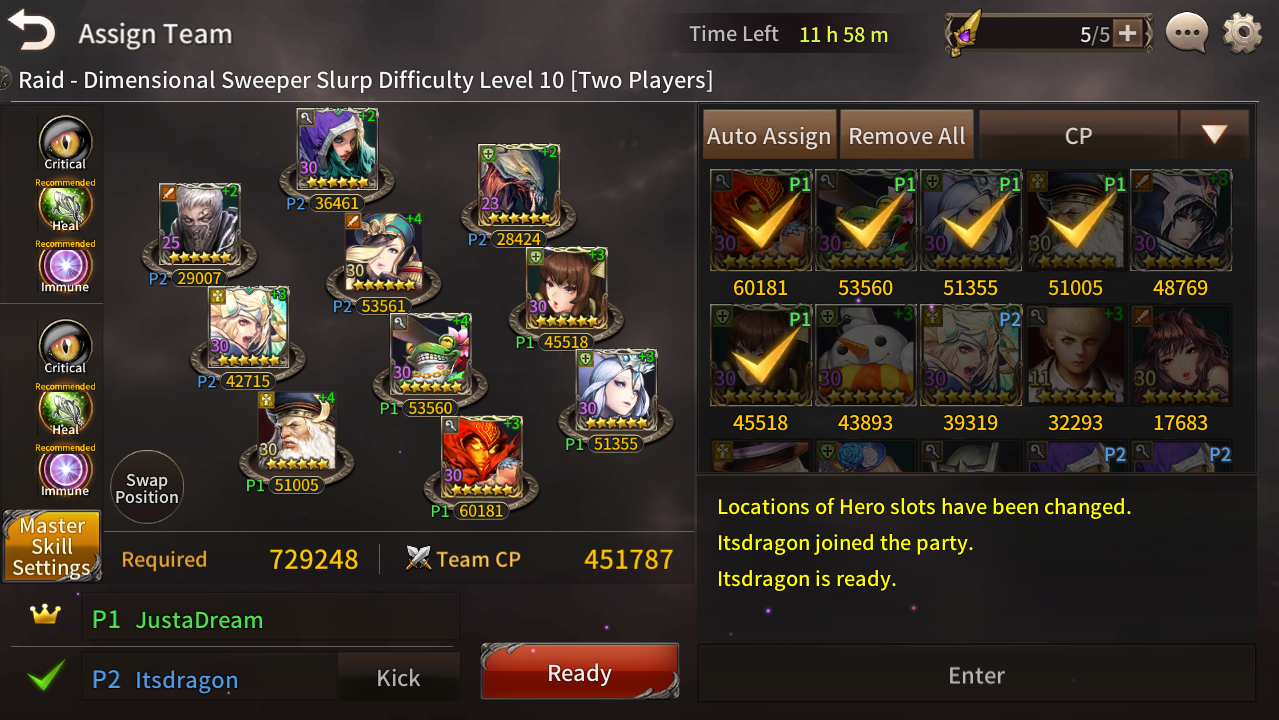 Heroes I would recommend to use in my lineup:

1) Snow Queen Herjuna - She helps to prevent the boss from using his ultimate, always cast her ultimate when the boss MP is at 5/5

5/5, her ultimate is always ready. (2)Replenish MP for DPS heroes, in my case, for Kali for her ultimate nuke.

3) Sorceress Reina - Her role is similar to Ribbit, however for our lineup, she provides MP to sustain Refud's ultimate

throughout the run. Both Ribbit & Reina are interchangeable, as their main role is just to provide MP. Her ultimate reduce the boss MP by 2 which could be really useful when you do not have Herjuna's ultimate ready and she also provide a 20%

4) Saint Edelyn & Horlan - ATK and CDR buffs is very useful especially when you stack it with other heroes such as Aureus,

5) Refud the Assassin - Provides 20% defense rate reduction and his ultimate 40% ATK + HP Drain Rate, too good to not be

used. Recommend to use Critical buff along with his ultimate to nuke down the boss! You can also use Radeath if you choose him from selector as he provide similar defense rate reduction debuff if you do not have Refud.

reduction and your damage output will increase significantly!

7) DPS units- High single target DPS such as Gloria, Kali, Darae. Position them 3 together in a line for effective buffing.

8) Other heroes such as Cedrina which I did not mention, you can replace her with another support/dps unit as you wish. I

1) Critical - Always cast it together with aoe buffing skills such as Refud's ultimate.

2) Heal - Highly advise to use it right at the start after the boss initial turn as he will use another aoe skill next.

3) Immune - Usually only needed at the 2nd life of the boss as he will cast a skill called "Rotting Saliva" to remove debuffs.

Please watch the video to understand further, coordination is key.

Hope you guys can clear it soon!