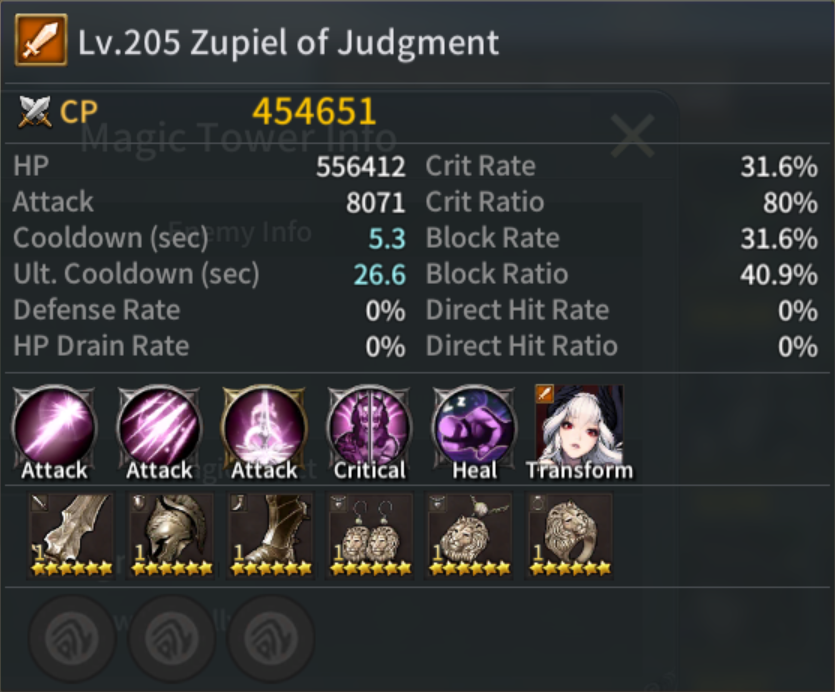 She has 556k HP, but because of constant healing you have to deal more damage to kill her in some cases.

The core mechanic of all fight. She kills every hero except one at the start of a battle. There are some ways to ignore that skill, like passives of Radeath, Khazad and Kunkka, may be Old Guardian's legendary set (don't have it, so can't test). But this is not the easy way to deal with her, just let Zupiel kill almost everyone.

Other skills are pretty generic:

Buff
Gains some ultimate cooldown reduction, critical rate and ratio on herself at the first turn if not damaged.

Removes one buff, average to high damage, some drain.

Her skill order depends on your damage and timing of using Hero's Token mastery skill (aka bubble, aka invincibility).

Additionally, Zupiel have one extra attack when she is defeated. So you need some HP to survive that or avoid damage with invincibility.

It's a duel, so you'll need a hero with decent single target damage and four supportive dead spectators.

Who to use for support?

Any hero with on death effect or effects from the start of a battle:
Reiden - 20% crit rate buff, 20% crit ratio buff. Almost a must, but 4* is enough.
Venomous Viper - 20% defense reduction. Good to have, worth starring him if you can't beat Zupiel in first 21 seconds.
Nepa-Tuum - 40% defense reduction. You'll need him at 6* stars for faster clears.
Alkaras - 20% cooldown reduction, extra MP. A must for speed kills, not that useful for starters but still. 4* is enough for his buff, 6* if you need mana.
Riri - 60% atk buff. A starter choice, 4* is enough (cause after that her buff will be dispelled).
Mayreel - 20% crit rate buff. Can be used if you are not using crit mastery right from start. 4* is enough.
Xiros - gives mana for 2nd turn ultimate, good choice for starters if defenders are banned. 4* is enough.
Rosarinte and Akiro - 20% atk buff, nothing special.
Medusa - can deal some damage. Needs investments! 6*, max lvl, atk gear, transcendance. It's better to focus onyour main dealer though.

Kali  is the best here. She can deal great damage with her skills, can reduce healing, and she is faster than Ribbit. If she's not banned, Kali will be a default choice for 3 out of 4 weeks.

Sample skillorder (Note, this is the hardest setup, cause no tanks involved):
1st turn. Use s2 to apply healing reduction on boss.
2nd turn. Use ultimate or s2 to deal some damage.
3rd turn. Use Hero's Token mastery. It's possible to use crit mastery too, but it can be used later. Why using invincibility here? Zupiel starts to deal damage from now on, we need to save our hero and heal Kali with drain. Use s2 or ultimate depending on Zupiel's defense.
4-6th turns. Just keep on going with damage.
7-8th turns. That's why you'll need 8sec cooldown and some HP drain. With that speed your Kali will be acting right after the 3rd usage of Judgment. You will have 2 turns to finish the boss. Use enhance and deal damage. Note that you'll need 50k HP at the end to survive finishing blow.

Made some work to downgrade Kali a little.

2. Average Kali - can beat Zupiel in first 3 turns with Nepa-Tuum (or before 45s mark without him), but cannot do it fast enough.
What do we need here?
Slightly more damage than before. Something like 7000 atk and 75% crit ratio.

Skill patterns can be the same too, just need enough damage to kill Zupiel in ~3-5 turns.
Or just use bubble from the start. Nothing special.

This time video will be for the easiest setup, we have all the necessary heroes available.
If you have equipment and a T5 Kali, you can beat Zupiel in first 3 turns or less - see next section.

3. Top10 Kali - can beat Zupiel fast enough within 1-3 turns.
What do we need here?
T5 Kali with best possible gear and runes. Lvling her past 30 is also needed.

It's not that hard to kill Zupiel within first 2-3 turns using invincibility and crit masteries. But for top10 you'll need to do that FAST.
We need to reduce cooldown and number of turns to lowest possible level. Use red runes, cd gear (like Emerald/Assassin/Dexterity/Time/Evil Dragon's accessories, extra lines on equipment).
As for rare sets it's a choice between Fallen (+8% crit damage, more atk) and Swift (3% cd reduction, less atk). All legendary dealer's sets are usable, but one stands apart for now in terms of speed (but not damage).
The Immortal's set will give you 40% cooldown reduction buff before the first turn. It's a 1 sec advantage for each 3.5 seconds of cooldown. It's a good option in current situation on global server while we have 5* accessories mainly.
The other good option is Godslayer's set because of extra 40% crit ratio. Can save you a turn with average accessories.

If you're aiming for top10, you'll already know how to act and gear your heroes.

What if Kali is banned? Or even have no Kali at all?
Well, at least Ribbit, Gloria, Irea, Darae, Agnes and Leonic can do the job.
Gloria and Darae can beat Zupiel within invincibility with low-mid investments and they are not mages like Ribbit.

Who needs Ribbit? No one, but here he is.

Well, not many choices here.

That's all. The fight has random only with direct critical hits, and can be finished by almost everyone, at least when Kali is not banned and your gear allows you to clear previous stages.